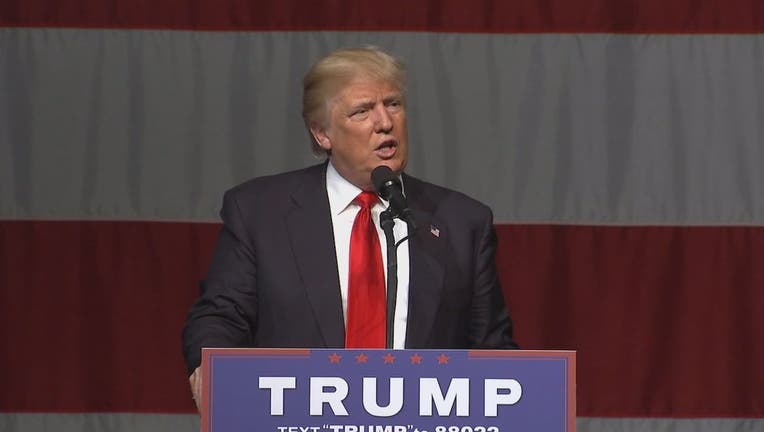 DUBLIN, Ohio (AP) -- Donald Trump is losing business to Mexico -- a prestigious golf tournament at his resort at Doral.

The PGA Tour announced Wednesday that a World Golf Championship, which attracts the best players in the world and has been at Trump-owned Doral in South Florida since 2007, is relocating to Mexico City next year.

The decision incensed Trump, who suggested Tuesday night in a Fox News interview with Sean Hannity, "I hope they have kidnapping insurance."

Cadillac did not renew its title sponsorship of the event, and PGA Tour Commissioner Tim Finchem said another sponsor that wanted to be at Doral could not be found. The tour signed a seven-year deal with Grupo Salinas, a group of Mexico City companies overseen by chairman Ricardo Salinas.

That means Doral, the longest-running PGA Tour event in Florida dating to 1962, will not have a tournament next year.

Trump, the presumptive Republican presidential nominee, called it a "sad day for Miami, the United States and the game of golf" to leave Doral after 54 years for Mexico.

"No different than Nabisco, Carrier and so many other American companies, the PGA Tour has put profit ahead of thousands of American jobs, millions of dollars in revenue for local communities and charities, and the enjoyment of hundreds of thousands of fans who make the tournament an annual tradition," Trump said. "This decision only further embodies the very reason I am running for president of the United States."

Finchem said the move had nothing to do with politics, only finances.

"As we anticipated, some of the reaction revolves around the feeling that somehow this is a political exercise, and it is not that in any way, shape or form," he said. "It is fundamentally a sponsorship issue. We are a conservative organization. We value dollars for our players. We have a strong sense of fiduciary responsibility. So we make decisions that are in the best interests of our players, short term and long term."

The coincidence of the move from Trump's resort outside Miami to Mexico City was not lost on some of the players.

When he announced his candidacy last year, Trump said Mexico was sending its unwanted people to the United States, and that in many cases they were "criminals, drugs dealers, rapists."

"It's quite ironic that we're going to Mexico after being at Doral," Rory McIlroy said. "We just jump over the wall."

McIlroy said it was good for the World Golf Championship to be in Mexico because these events were meant to be played around the world. Three of them had been held in the United States. The other is in Shanghai.

Trump's son Eric said Cadillac was "ready, willing and able to continue as the title sponsor for the tournament." A Cadillac spokesman said only that it made the decision not to extend its sponsorship after six years.

Trump purchased Doral in 2012 and poured $250 million into renovations. He also brought in Gil Hanse, the architect chosen to design the Olympic course in Rio de Janeiro, to redo the course long known as the "Blue Monster."

The tour signed a deal with Doral through 2023, though there was a provision in the contract that a new title sponsor had the option to move it elsewhere. Finchem suggested that Trump's ownership of Doral might have contributed to the difficulty in finding a sponsor willing to pay an estimated $12 million a year.

But he said it was much the presence of Trump as the caustic comments that have marked his campaign.

"I think it's more Donald Trump is a brand -- a big brand," Finchem said. "And when you're asking a company to invest millions of dollars in branding a tournament, and they're going to share that brand with the host, it's a difficult conversation. ... So I think the difficulty there is more that and less politics," he said. "The politics might have contributed some since he's been running, but it's more that. And he knows that."

Finchem said he met with Trump on Tuesday to tell him the tour's decision.

Salinas, whose properties include TV Azteca, was sued by the Securities and Exchange Commission in 2005 over accusations he engaged in an elaborate scheme to conceal his role in a series of transactions through which he profited $109 million. He settled a year later for $7.5 million.

Finchem said the tour researched his history and was aware of the SEC civil suit but that "given the facts, it should not be something that would preclude us to do this particular transaction."

The tournament will be called the World Golf Championships-Mexico Championship and will be held March 2-5. Finchem said the 2017 schedule is not set, so it was not clear if Mexico would be in the middle of the Florida swing or be held before the tour reached Florida.

Still to be determined is the golf course. Finchem said the tour has narrowed it down to two options he did not disclose.

The PGA Tour already has one tournament in Mexico in the fall, the OHL Classic at Mayakoba, held at a beach resort south of Cancun.

The tour has had problems in Mexico City in the past. When a PGA Tour Champions event was held there in 2003, six players were robbed at gunpoint in a restaurant, and thieves got away with expensive watches. No one was hurt.