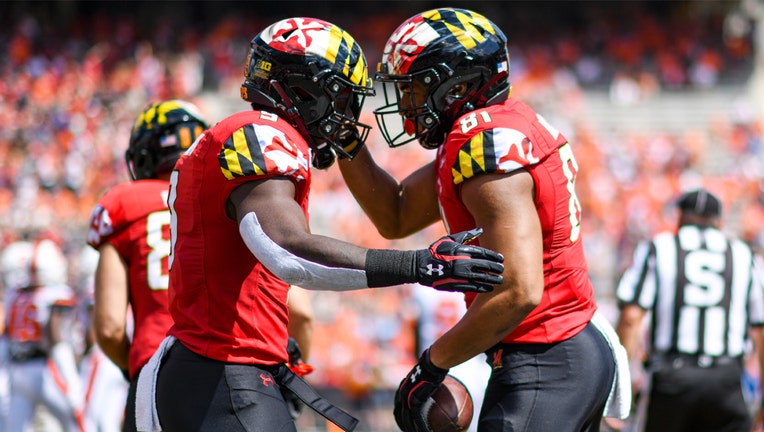 Maryland Terrapins tight end Tyler Mabry (81) is congratulated after catching a 7 yard touchdown pass by tight end Chigoziem Okonkwo (9) in the first quarter against the Syracuse Orange on September 7, 2019, at Capital One Field at Maryland Stadium i

COLLEGE PARK, Md. - The Maryland Terrapins dominated again on the gridiron Saturday, blowing out No. 21 Syracuse 63-20.

Big plays on both sides of the ball powered the Terps throughout the game against their first ranked opponent of the season.

Their 42 points in the first half was the most in a half against a ranked opponent since their 1984 matchup against No. 6 Miami.

The Terps are playing with emotion after the death of offensive lineman Jordan McNair cast a cloud over the team all last season, and resulted in the firing of coach DJ Durkin. Mike Locksley took over the program last December.

Maryland's blowout win against Syracuse follows last week's 79-0 drumming of Howard. Players say the 79 points scored was in memory of McNair, who wore No. 79 before his death.

It's the first time the Terps have scored 63 or more points in back-to-back games in the program's history.