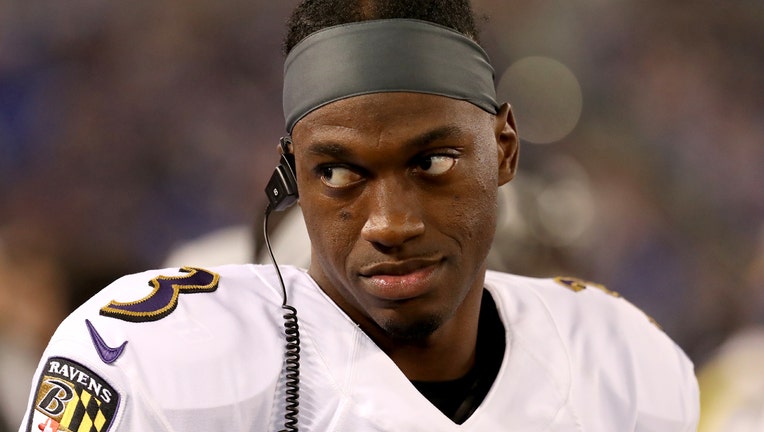 Former Redskins QB Robert Griffin III, now with the Ravens, will miss "a few weeks" after breaking his thumb in training camp.

OWINGS MILLS, Md. - Baltimore Ravens backup quarterback Robert Griffin III will be sidelined for "at least a few weeks" after fracturing his right thumb during the team's third practice of training camp.

The injury occurred Saturday night when Griffin hit his hand on a defender's helmet during a workout at M&T Bank Stadium. It was the team's first practice of the summer in full pads.

Ravens coach John Harbaugh didn't announce the extent of the injury until Sunday, saying, "Robert fractured a bone in his right hand and will miss practice for at least a few weeks."

After Saturday's practice, Griffin said, "I've got a little issue with my thumb. Hit it on the helmet of one of the D-linemen coming through the line."

Griffin foreshadowed the news later Saturday night on Twitter, saying, "Everything you have been through will make you stronger."

Griffin ended a one-year hiatus from the NFL last season, signing a one-year contract with the Ravens to serve in a reserve role. He played in three games, going 2 for 6 for 21 yards.