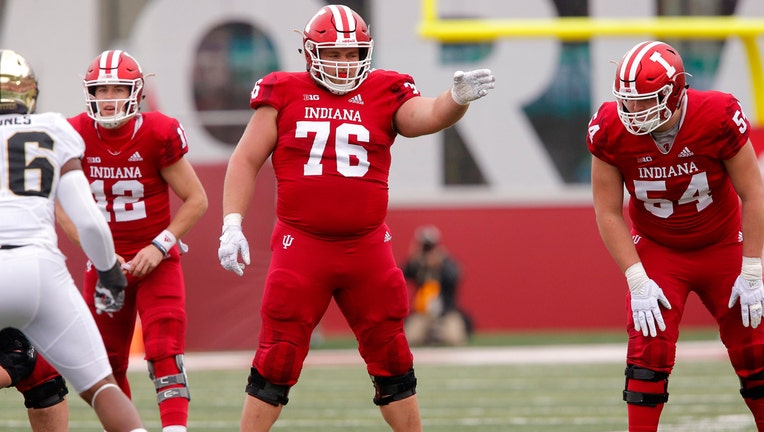 Redskins rookie Wes Martin points to the defense during an Indiana Hoosiers' game against the Purdue Boilermakers. (Photo by Jeffrey Brown/Icon Sportswire via Getty Images)

WASHINGTON - Rhonda Martin got in trouble with her father when she tried as a child to bring home stray dogs.

Now she helps her son Wes rescue as many dogs as possible while he follows his dream to play pro football.

Wes Martin last summer started Brave Breed Rescue Inc. to keep alive the family tradition of taking care of dogs. He raised $1,600 for the rescue with bench presses at his pre-draft workout day, and the Washington Redskins rookie guard hopes to entwine his passion for dogs with his NFL career that could give Brave Breed a major boost.

"It's just been my mom's calling, I guess. She's been doing it her whole life and then I adapted it from her and started the rescue," Wes said. "It means the world to me to be able to save at-risk dogs that if we weren't able to step in, a lot of them would be headed to euthanasia."

Martin stands a good chance of starting for Washington this season, no surprise given how he accomplishes things ahead of schedule. He and his mom talked for a while about starting a dog rescue if he made some more money, but he didn't wait for that and founded Brave Breed after his junior year of college.

"It's something I take a lot of pride in," Wes said. "My mom and I, we were rescuing and re-homing a lot of dogs. So last summer, being able to start a (nonprofit) and get the actual dog rescue up and running was awesome."

So far, Brave Breed has rescued and re-homed 22 dogs, have five currently in the process and one more pending. The organization does meet and greets at Pet Value stores and uses "Adopt a Pet" on Facebook.

"I get three calls a day from somebody with a stray dog or somebody wanting to surrender their dog," Rhonda said. "Every day I get calls, and it just breaks my heart because I can only take care of so many and I'm overbooked now."

More money can only help that cause, which was the point of using his pro day at Indiana to raise money and awareness every time he raised the 225-pound bench press. Martin was so far off the radar that he wasn't invited to the NFL's scouting combine, but his 38 bench press reps would've ranked him second at that event — even if that didn't match his personal best.

"So many people were gathered around him," Rhonda said. "It was pretty exciting. It kind of gave us more hope of getting his name out there."

In addition to pumping some funds into the fledgling organization that spends a significant amount of money on shots, heartworm tests and other veterinarian care, it got him noticed by the Redskins. They marveled at the brute strength Martin built from his dairy farm youth, and he continues to make positive impressions.

"He's a smart kid, for sure — hard worker, strong, really, really, really strong," coach Jay Gruden said Thursday. "He's a lot more athletic than we thought. He can pull. He's pulling very well. As (far as) character, we knew he was a grade A character."

That character came in part from his mom, who had to walk around the neighborhood looking for stray dogs' homes or trying to find them another one. Now she and his fiancée, Bailey, have taken on much of the responsibility for the dog rescue with Wes working a full-time job at training camp.

Rhonda currently has eight dogs at her house and another foster she checks in on daily, while Bailey is at the house they needed to buy with their three rescue pitbulls because finding a rental that would allow them was near impossible.

"It's tough to do a whole lot right now," said Wes, who still does some work on the website in his spare time. "I appreciate it a whole bunch. It wouldn't be able to keep going without them."

The goal is to keep Brave Breed going strong in Ohio and maybe one day have a presence in the D.C. area. The next step for the Martins is to buy land and build a facility in Miami County, Ohio.

"That's our main goal, and then we can grow from there and obviously take on more," Rhonda said.

Rhonda hopes Wes establishing himself as an NFL player contributes to the growth of the dog rescue as he becomes better known. His focus right now is on football, but she was surprised at what Wes said he'd like to do when his playing career is over.

"He has said once he's done with football, that's probably what he's going to do is run the rescue," Rhonda said. "That would be great."