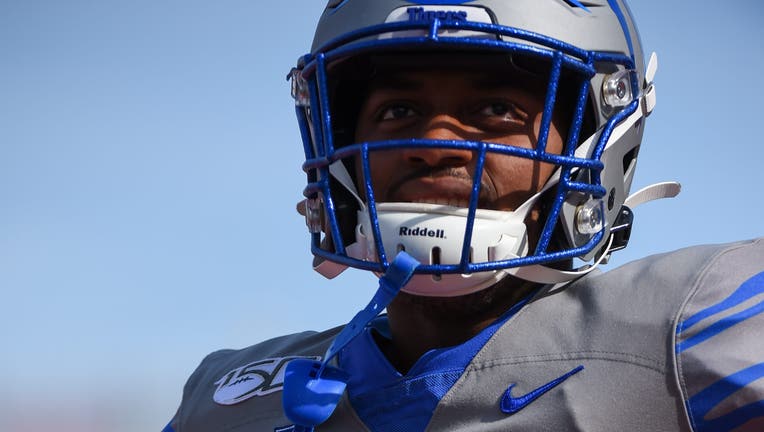 WASHINGTON (AP) - The Redskins stayed true to their best player available philosophy by taking offensive playmaker Antonio Gibson from Memphis with the 66th pick in the NFL draft Friday night.

Gibson doesn't fill one of Washington's most pressing needs but gives new coach Ron Rivera's offense and special teams someone who can do a little bit of everything. A transfer from East Central Community College to Memphis, the 6-foot, 228-pound Gibson can play out of the backfield, line up outside and return punts and kickoffs.

After taking Ohio State pass-rusher Chase Young with the No. 2 pick Thursday, the Redskins didn't have another pick throughout the rest of the first round or the entire second. They traded their 2020 second-round pick a year ago to move into the late first round for pass-rusher Montez Sweat, and now they hope to be set along the defensive line.

“I think there’s an impact getting to the quarterback has on the other rushers: the linebackers and the secondary,” Rivera said. “And if we can create that type of immediate disruption, it’s going to help the back seven.”

Rivera hoped to find a way into the second round, but that never materialized. Washington was also unable to trade disgruntled left tackle Trent Williams, whose dispute with the organization is almost a year old.

Williams took issue with the medical staff's handling of a growth on his head, which turned out to be a cancer scare. After starting for nine seasons and getting picked for seven Pro Bowls, Williams did not report to training camp last year and missed the entire season.

Even the firing of president Bruce Allen and head athletic trainer Larry Hess and hiring of Rivera apparently couldn't salvage the relationship. Williams' representatives recently reiterated his desire to be traded or released, opening another hole on the offensive line.

“There’s no rush, there's no hurry,” Rivera said. "We’ll have opportunities and we’ll just continue to work on it."

Taking Young was a case of drafting the best player available — and arguably the most talented in the entire draft — rather than filling a need. The release of Jordan Reed and retirement of Vernon Davis opened a gaping hole at tight end, there's still a need at receiver after falling short in landing Amari Cooper and the release of Josh Norman and trade of Quinton Dunbar puts cornerback high on the list, too.