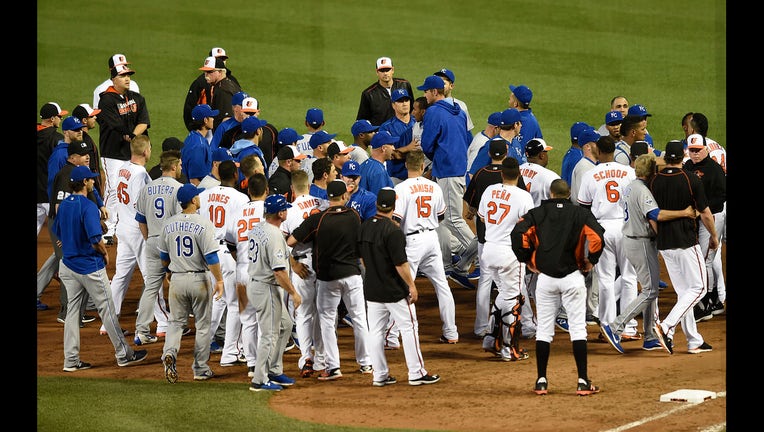 This is the second straight season Ventura has been suspended -- he drew a seven-game ban last year after an altercation with the White Sox.

"It's just kind of tough when you have to play short because of something that someone else kind of got going," Orioles manager Buck Showalter said before Thursday night's game at Toronto.

On Tuesday night in Baltimore, Ventura hit Machado in the back with a 99 mph fastball in the fifth inning. Machado charged the mound and punched Ventura in the head as the benches emptied.

Ventura and Machado both have appealed their suspensions. They can continue to play until the process is complete.

"They came up with a decision and obviously I'm going to appeal it," Machado said. "We'll see what happens."

Machado was in the starting lineup Thursday night against the Blue Jays.

Showalter said he doesn't expect Machado's appeal to be heard while Baltimore is in Toronto for a four-game series.

No matter what happens, Showalter said it will be difficult to cope without Machado, who is batting .303 with 15 homers and 37 RBIs.

Baltimore is already minus shortstop J.J. Hardy, who has been sidelined since May 1 with a broken left foot.

This is the second career suspension for Machado, who sat out five games in 2014 after throwing his bat toward third base following an inside pitch from Oakland's Fernando Abad. Machado appealed that suspension but the penalty was upheld.

The Royals next play Friday night in Chicago against the White Sox.

The trouble between Ventura and Machado started earlier in the game. Machado got brushed back by two fastballs, then flied out and had words with Ventura.

The next time up, Machado was hit.

After the game, Orioles star Adam Jones said he was glad Machado defended himself and said he would pay any fine.

"Tonight, Manny handled it himself and I couldn't be happier for him," Jones said then. "I knew it was going to happen. (Ventura) has electric stuff and the talent is all there, but between the ears, there is a circuit board off balance. I don't get it. I don't get it."

A talented hard thrower who can be temperamental, Ventura got into skirmishes with the Angels and the Athletics early last season before his dustup with the White Sox led to a suspension.