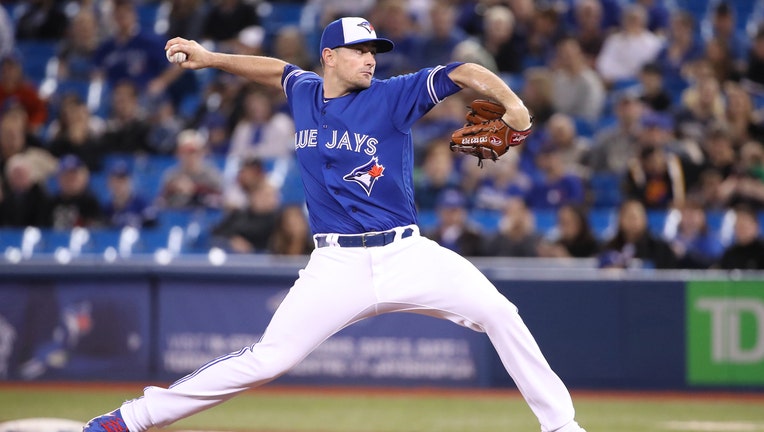 The Washington Nationals picked up Daniel Hudson from the Toronto Blue Jays and Roenis Elías and Hunter Strickland from the Seattle Mariners in an effort to improve their bullpen. (Photo by Tom Szczerbowski/Getty Images)

WASHINGTON - It's become a familiar ritual for the Washington Nationals under general manager Mike Rizzo: adding relievers at the trade deadline to address the biggest weakness on a contending team.

The Nationals were at it again on Wednesday, getting Daniel Hudson from the Toronto Blue Jays and Roenis Elías and Hunter Strickland from the Seattle Mariners in an effort to improve a bullpen that's been overworked and sometimes overmatched.

Washington sent minor league right-hander Kyle Johnston to Toronto for Hudson, who can become a free agent at the end of the season. The Nationals dealt three pitching prospects to Seattle for Elías and Strickland, both of whom are under team control through 2021.

"These aren't the sexiest names in the trade market but I think we got good quality, reliable guys with some moxie and some experience," Rizzo said. "We got guys who have accumulated a lot of saves in the past. We got a couple controllable relievers for not only this year but the foreseeable future, and the player return was something that was acceptable to us."

Washington has a strong starting rotation led by Max Scherzer, Stephen Strasburg and Patrick Corbin, but its bullpen ERA entering Wednesday's loss to the Atlanta Braves was an NL-worst 5.97. The Nationals signed Trevor Rosenthal in the offseason to become a setup man for closer Sean Doolittle but ended up releasing him because of persistent control issues. Rosenthal now pitches for the Detroit Tigers, with Washington still paying most of his $7 million salary.

Washington trails first-place Atlanta by 6½ games in the NL East and is in contention for an NL wild-card spot.

The Nationals signed 42-year-old Fernando Rodney in June, and he has been getting work in the eighth inning. Last week, manager Dave Martinez used Rodney in three games in two days against the Colorado Rockies, with Rodney blowing a save and taking the loss in his third outing.

"These guys are all qualified to pitch the seventh, eighth, and the ninth inning. They all have saves on their resume, and they're all stuff guys that can get big outs at big times," Rizzo said. "The role system, I think that'll kind of work itself out."

The 30-year-old Strickland missed most of the season with a right lat strain and has an 8.10 ERA in four appearances. The right-hander has a 2.98 career ERA over six seasons.

"Elías had kind of a step-out year for me and what he was able to do. We gave him an opportunity, and he was one of the guys who took advantage of it," Mariners manager Scott Servais said. "What (Strickland) has been able to do in our clubhouse without actually being on the field was pretty remarkable. The guys really responded to him and his experience and his professionalism. He's helped a lot of our young guys. He's healthy."

Strickland is familiar to Nationals fans for his feud with former slugger Bryce Harper, which reached its climax when he plunked Harper in 2017, triggering a massive brawl.

"You love him or hate him," Rizzo said. "He's a National now, so I think he's going to fit in beautifully with the clubhouse."

Washington, which has four division titles since 2012 but has never won a playoff series, made midseason trades for relievers Jonathan Papelbon in 2015, Mark Melancon in 2016 and Ryan Madson, Brandon Kintzler and Doolittle in 2017. Only Doolittle is still with the Nationals.

Rizzo was limited in who he could pursue this year by ownership's desire to stay below the luxury tax threshold.

Washington sent 23-year-old right-hander Kyle Johnston to Toronto. He is 9-9 with a 4.03 ERA in 20 starts for Class A Potomac.