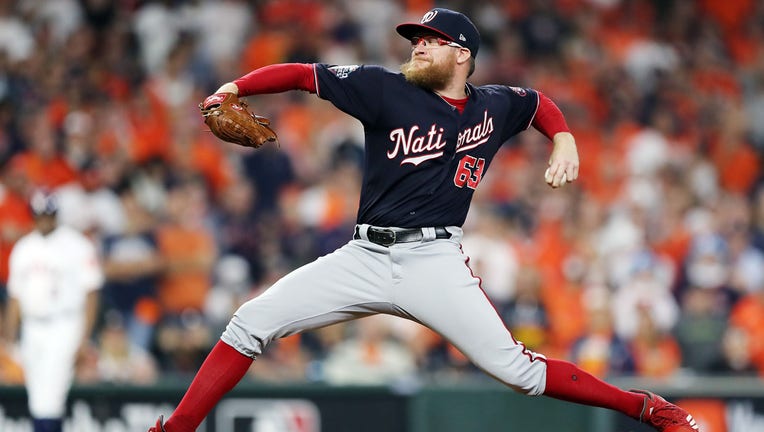 Sean Doolittle #63 of the Washington Nationals delivers the pitch against the Houston Astros during the ninth inning in Game Six of the 2019 World Series at Minute Maid Park on October 29, 2019 in Houston, Texas. (Photo by Elsa/Getty Images)

WASHINGTON - The World Series champion Washington Nationals will be honored Monday at the White House, but one member of the team says he won’t be attending, according to a report.

According to the Washington Post, reliever Sean Doolittle has said he does not plan to attend the event.

In a Friday interview, Doolittle told the newspaper that while he disagrees with many of the administration's policies, his primary reason for declining the invitation was the President's "divisive rhetoric" and what he sees has language that "enables conspiracy theories."

Doolittle stressed that he wants to celebrate the moment with his teammates at the White House, but said he "just can't do it."

The 33-year-old reliever told the Washington Post he looked at how other players handled refusing the visit in recent years, including Capitals goalie Braden Holtby.

Championship teams have traditionally been welcomed at the White House, but recent teams have declined invitations.

The feud erupted as Trump was lambasting NFL athletes for kneeling in protest during the national anthem.

The University of Virginia men's basketball team said earlier this year it could not agree on a date for a visit.

In 2018, the President disinvited the SuperBowl champion Philadelphia Eagles after a number of players turned down the invitation.

Trump hosted the Air Force Academy football team at the White House for a Commander-in-Chief's trophy ceremony in May and the champion Clemson Tigers football team in June.

The president was notably booed when he visited Nationals Park for Game 5 of the World Series.