Nationals fans booed President Trump as soon as he was shown on the big screen during Game 5 of the World Series on Sunday at Nationals Park. Video courtesy of&nbsp;Dante Verme.

WASHINGTON (AP) - President Donald Trump was met with loud, sustained boos and chants of "Lock him up!" from fans at Nationals Park when he was shown on the in-stadium video screen after the third inning of Game 5.

The boos ended only after the video screen cut to a shot of U.S. service members waving to the crowd and then showed a message thanking the military. Trump is attending the game with five wounded veterans.

Then, as Nationals starter Joe Ross took the mound to warm up for the fourth inning, fans started chanting, "Lock him up!" in an apparent reference to ongoing impeachment proceedings against the president. Pro-Trump crowds have frequently chanted "Lock her up!" about Hillary Clinton at the president's campaign rallies.

The reaction was somewhat expected as Trump won just 4 percent of the vote from the District of Columbia in the 2016 Election.

Trump first mentioned his World Series plan to reporters in the Oval Office on Thursday. The president did not throw out the ceremonial first pitch, noting that he would have to wear a bulletproof vest while attending the game.

"They're going to have to dress me up in a lot of heavy armor," Trump said. "I'll look too heavy. I don't like that." 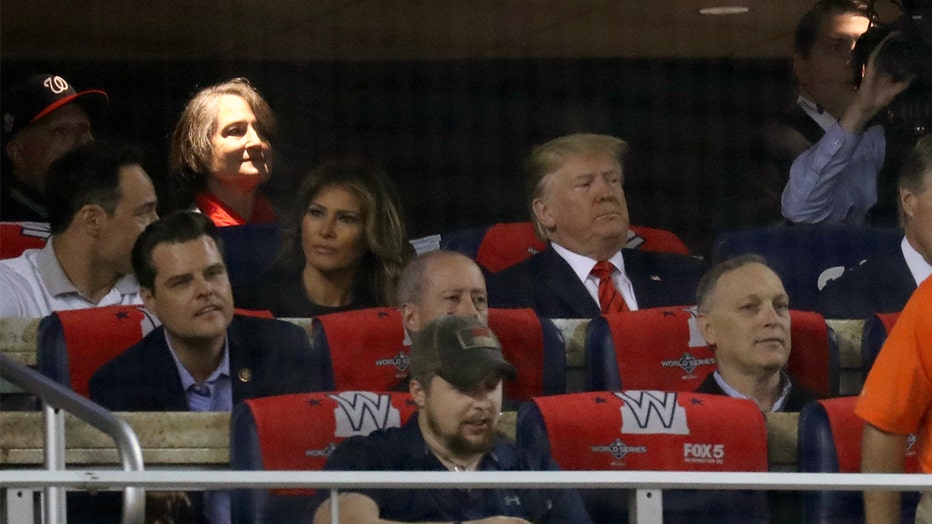 First lady Melania Trump and President Donald Trump attend Game Five of the 2019 World Series between the Houston Astros and the Washington Nationals at Nationals Park on October 27, 2019 in Washington, DC. (Photo by Rob Carr/Getty Images)

Presidential attendance at baseball games is a rich tradition woven into the fabric of American society. Whether Republican or Democrat, liberal or conservative, presidents have historically attended baseball games throughout the last century of the United States.

Franklin D. Roosevelt's limousine drove onto the field ahead of the 1933 World Series, the last time the nation's capital hosted the Fall Classic. Congressional hearings on the stock market collapse were postponed so senators could attend the game.

RELATED: What to know in Game 5 of the World Series

Harry S. Truman tossed out a first pitch from the stands of a regular-season game in August 1945, just days after the end of World War II, giving Americans a sense that normalcy was returning after years of global conflict.

George W. Bush wore a bulletproof vest under his jacket when he threw a perfect strike from the Yankee Stadium mound during the 2001 World Series, not 10 miles from where the World Trade Center was attacked a month earlier.

Trump, who has yet to throw out a ceremonial first pitch since taking office, arrived after the Washington Nationals and Houston Astros were underway and plans to leave before the final out, in hopes of making his visit less disruptive to fans, according to Rob Manfred, Major League Baseball's commissioner.

While it was Trump's first time attending a major league game as president, he has deep ties to the sport. Trump is a longtime New York Yankees fan who was spotted regularly at games in the Bronx. He also played baseball in high school.