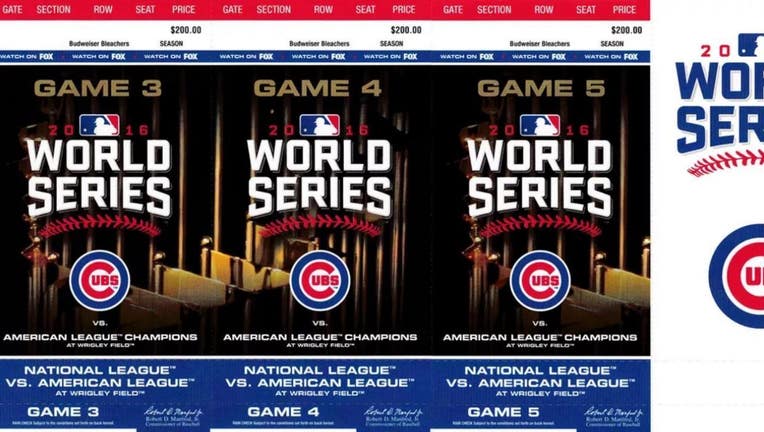 Judge Marya Nega ruled after in-court arguments that the husband can keep the tickets for himself and the couple's 12-year-old son but should pay for a new ticket for Nancy Riddle in a "comparable" section to his. The cheapest available tickets start at around $3,000.

The Cubs haven't won a World Series title since 1908 and long-suffering fans are paying a minimum of thousands of dollars per ticket to attend games at Wrigley Field. Even standing-room tickets on sites such as StubHub started at around $2,500, with tickets for most actual seats going for at least five figures and some sellers asking for more than $100,000 for prime box seats.

The husband's lawyer, Michael Berger, declined to name his client in a Thursday interview. But he did describe the legal tussle, saying his client landed the World Series tickets because he bought a season-ticket package deal with his friends this year before divorce proceedings began in April.

Berger is a fan of the Cubs' bitter cross-town rivals, the White Sox, and said he reluctantly acknowledged to the court during arguments before the judge that the Cubs "are a great team."

"Even if the Cubs lose this time, it is likely -- regrettably -- that they will be back to the World Series again soon," he said in a Thursday phone interview.