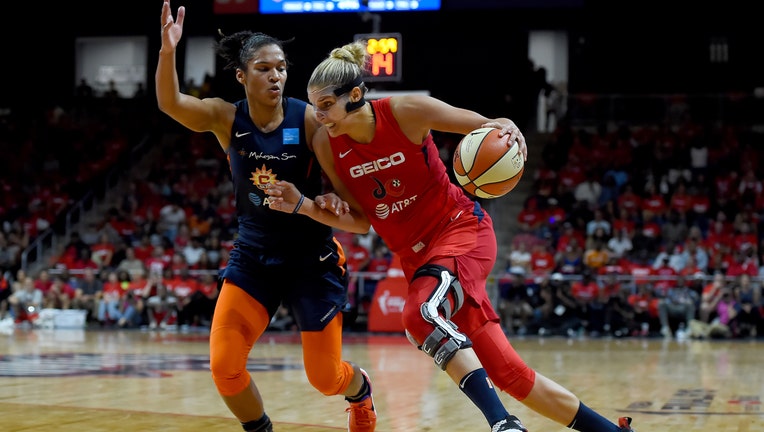 WASHINGTON, DC - SEPTEMBER 29: Elena Delle Donne #11 of the Washington Mystics dribbles in front of Alyssa Thomas #25 of the Connecticut Sun during the second half of WNBA Finals Game One at St Elizabeths East Entertainment & Sports Arena on Sept

WASHINGTON - With the Connecticut Sun rallying, Elena Delle Donne wouldn't be denied down the stretch for the Washington Mystics in Game 1 of the WNBA Finals.

The league's MVP scored two big baskets for Washington after Connecticut had cut its deficit to four in the fourth quarter and the Mystics held off the Sun 95-86 on Sunday.

"It's nice to have a weapon like that that can make those plays because there's not very many that can," Washington coach Mike Thibault said.

Delle Donne scored 22 points and Ariel Atkins had 21 for the Mystics, who earned their first finals win in franchise history. They were swept last year by Seattle in their only other appearance in the championship round. Delle Donne was battling a bone bruise in last year's finals.

"It feels great to know that I'm able to actually give everything I have," Delle Donne said. "Last playoffs I gave everything I had, but that was about 70 percent. Just physically I wasn't there. So, to be back and to be feeling good and to have my body working properly."

Kristi Toliver, who suffered her own bone bruise this year, added 18 points for the Mystics. Game 2 of the best-of-five series is Tuesday night in Washington.

The Mystics were up nine at the half and extended the lead to 17 in the third quarter before Connecticut rallied within four twice in the final period. Delle Donne — the league's MVP — answered each time for Washington with a basket. Her jumper with 4:56 left made it 82-76 and started a 9-0 run to put the game out of reach.

"Obviously a go-to player down the stretch that they can play through and made some big plays," Connecticut coach Curt Miller said of Delle Donne. "But like Alyssa Thomas is an elite defender, and when she bodies up on 99 percent of the people in the league and they've picked up their dribble, she usually gets them stopped. But we all know that EDD's step-through in that last movement to the basket where she leans in and can create space and get her shot off is the only person in the world that does that."

Atkins followed with a 3-pointer that made it a nine-point game and then corralled an offensive rebound that Toliver finished off with a finger roll down the lane with 3:16 left.

"Ariel Atkins contribution was huge today, from making her first three of the game to being aggressive," Thibault said. "That looked like the Ariel from last year in the playoffs, and that offensive rebound she got late in the game was a huge saver for us. It gave us the last piece of momentum that we needed."

The Sun could only get within eight the rest of the way.

Courtney Williams scored 26 points and Alyssa Thomas added 20 to lead Connecticut, playing the finals for the first time since 2005.

After a tight first 6 minutes Mike Thibault inserted Emma Meesseman into the lineup playing all three of Washington's bigs together. It was a lineup that Connecticut didn't see during the three regular season meetings. Delle Donne missed the first game because of knee pain. Meesseman missed the other two games because she was with the Belgium national team

The pair along with LaToya Sanders helped Washington go on a 12-0 run to close the quarter and give the Mystics a 30-17 lead.

"It's something we talked about," Sun guard Jasmine Thomas said of getting off to a good start. "They score the ball so well and play so well together, we can't have a flat start. The first quarter start being making a big difference in Game 2. "

TIP-INS: The Mystics hit their first 13 free throws before Meesseman missed one in the third quarter. The team, which shot 87.5% from the line during the regular season, finished 17 for 21. ...

Maryland was well represented in the finals with five of coach Brenda Frese's former players seeing court time in Game 1. Washington had Shatori Walker-Kimbrough ('17), Tianna Hawkins ('13) and Toliver ('09) while the Sun had Brionna Jones ('17) and Thomas ('14).

Only Toliver won a championship in college and she's also the only one to win a WNBA title, doing so with Los Angeles in 2016.

Frese was in attendance.