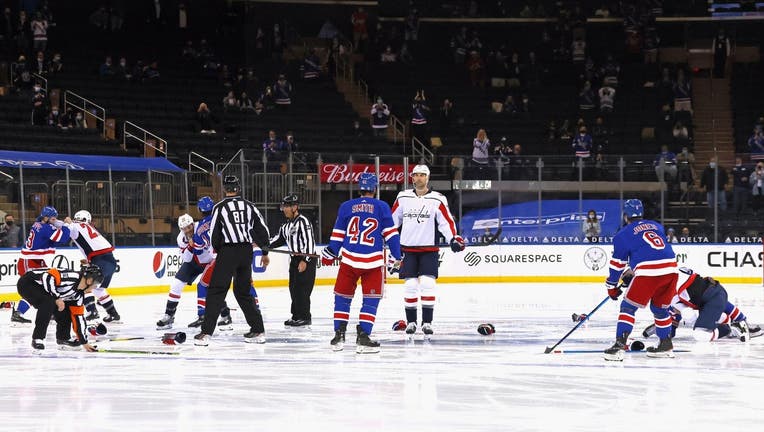 The game between the Washington Capitals and the New York Rangers starts with a line brawl one second into play at Madison Square Garden on May 05, 2021 in New York City. (Photo by Bruce Bennett/Getty Images)

WASHINGTON - The Washington Capitals will open the season on their home ice tonight when they take on the New York Rangers.

The Capitals may, however, be without superstar Alexander Ovechkin, who is listed as questionable with a lower-body injury.

The Washington Capitals will take on the Rangers tonight for their home opener! FOX 5’s Mike Thomas visited the Capital One Arena for a preview!

The Capitals put longtime Ovechkin running mate Nicklas Backstrom on long-term injured reserve on the eve of their opener, meaning they will be without their top center for at least the first 10 games of the season. Backstrom has been rehabbing a lingering left hip injury and skated Wednesday for the first time since training camp began in September.

The Washington Capitals will take on the Rangers tonight for their home opener! FOX 5’s Mike Thomas visited the Capital One Arena for a preview.

The Rangers-Capitals game is one of the more highly anticipated tilts early in the new season after last year’s memorable puck-drop brawl.

The incident was ignited in a previous game when Capitals’ enforcer Tom Wilson injured Artemi Panarin and was fined for roughing Pavel Buchnevich in a post-whistle scrum.

Wilson joked at the start of camp he didn't even know the Capitals opened against the Rangers but expects it to be a fun game.

"It’s a big spotlight on that game — that’s what makes sports great," Wilson said. "The rivalries, the emotion, the passion, we’ll call it that to be polite, I guess. ... Teammates sticking up for each other, hard-nosed game. So it’ll be exciting, I know everyone’s excited about it."