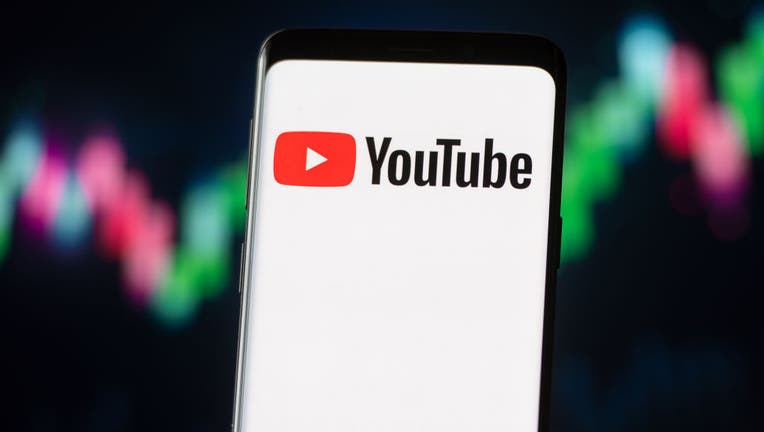 FILE - In this photo illustration a YouTube logo seen displayed on a smartphone. (Mateusz Slodkowski/SOPA Images/LightRocket via Getty Images)

"Due to the disturbing events that transpired yesterday, and given that the election results have been certified, any channel posting new videos with these false claims in violation of our policies will now receive a strike, a penalty which temporarily restricts uploading or live-streaming," Joseph said.

"Channels that receive three strikes in the same 90-day period will be permanently removed from YouTube," Joseph said.

This news comes just one day after YouTube removed a video posted Wednesday afternoon to Trump’s social media channel that YouTube said "violated our polices regarding content that alleges widespread fraud or errors changed the outcome of the 2020 U.S. Election."

YouTube’s policy update came one day after Twitter locked President Donald Trump out of his account for "12 hours" on Wednesday over the video and several other tweets, demanding that he delete tweets that violated the company’s policies.

Twitter swiftly moved on Wednesday to block the ability to reply, like, or retweet the president's video due to "a risk of violence," threatening to lock Trump out of his account permanently if he persisted in violating Twitter rules.

Twitter aims to slow spread of viral misinformation on its platform

The company has taken a more proactive approach regarding content moderation on its site.

"The shocking events of the last 24 hours clearly demonstrate that President Donald Trump intends to use his remaining time in office to undermine the peaceful and lawful transition of power to his elected successor, Joe Biden," Facebook CEO Mark Zuckerberg said in a statement Thursday morning.

Zuckerberg said Facebook has, for years, allowed Trump to use its platform consistent with its rules, but has removed content or labeled posts that violate its policy.

In December, following the 2020 election, YouTube updated its policy and began removing content that alleges widespread fraud or errors changed the outcome of the 2020 U.S. Election.

According to YouTube, the company has a longstanding, straightforward three-strikes system, with channels being suspended for increasing durations at each strike until they are eventually terminated.

Amid criticism for not removing or labeling political posts that spread misinformation, Facebook is launching a massive effort to boost voter turnout and show authoritative information about voting.

"If we find your content doesn’t follow our policies for a second time, you'll get a strike. This means you won't be able to do the following for one week: Upload videos, live streams, or stories, Create custom thumbnails or Community posts, Created, edit, or add collaborators to playlists, Add or remove playlists from the watch page using the 'Save' button, Show a trailer during your Premieres, Send viewers from a live stream to a Premiere or send viewers from a Premiere to a live stream," YouTube's policy reads.

YouTube says full privileges will be restored automatically after the 1-week period, but the strike will remain on an offending channel for 90 days.

Three strikes in the same 90-day period result in a channel being permanently removed from YouTube.