LOS ANGELES - Retired NBA All-Star Dwyane Wade recently opened up about his role as a father and the moment one of his children came out as transgender.

The former Miami Heat player appeared on “The Ellen DeGeneres Show” on Tuesday and recalled the day his 12-year-old came home and wanted to discuss gender identity.

“So once Zaya, our 12-year-old, came home — I don’t know if everyone knows, originally named Zion; Zion, born as a boy — came home and said, ‘Hey, so I want to talk to you guys. I think going forward, I’m ready to live my truth. And I want to be referenced as she and her. I would love for you guys to call me Zaya,’” Wade recalled.

Wade said he and his wife, actress Gabrielle Union, then set out to educate themselves on all the ways they could support their child. 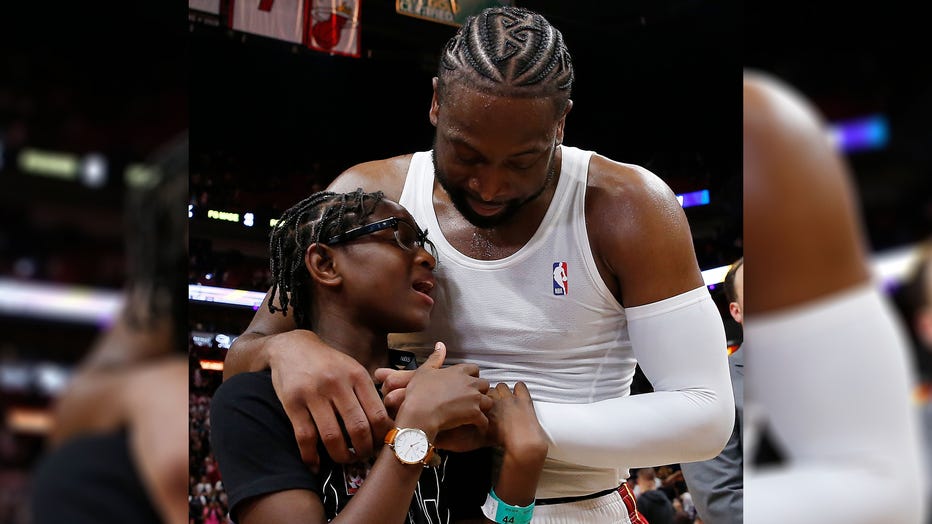 Dwyane and Zaya Wade are pictured during his final career home game at American Airlines Arena on April 9, 2019 in Miami, Florida. (Photo by Michael Reaves/Getty Images)

“My wife reached out to everybody on the cast of 'Pose,'" Wade explained, referring to the FX series about New York City's LGBTQ and gender-nonconforming ballroom culture scene in the 1980s and early 1990s. The series features the largest cast of transgender actors in a series regular role.

"We just tried to figure out as much information as we can to make sure we give our child the best opportunity to be her best self.”

Wade said he told Zaya he hopes she and their family can help be a voice for others.

“Once Zion came home and said, ‘Call me Zaya,’ and ‘I’m ready to take on this,’ I looked at her and said, ‘You are a leader, and it’s our opportunity to allow you to be a voice,’” the father of four explained. “Right now, it’s through us because she’s 12 years old, but eventually, it will be through her.”

DeGeneres applauded their actions as parents.

“I think it’s what every parent should be, is what you’re being right now. And that is unconditionally loving your child and supporting your child in whoever they are,” DeGeneres told the NBA star.

Wade responded by explaining how both he and Union take their roles “very seriously.”

“Meet Zaya. She's compassionate, loving, whip smart and we are so proud of her. It’s Ok to listen to, love & respect your children exactly as they are. Love and light good people,” she wrote.

Zaya’s older brother, 18-year-old Zaire Wade, shared support for his sibling on Instagram with a throwback photo of the two as younger children.

“I have been blessed to have my best friend, Zaya with me for 12 years. We did everything together...we fought, we played, we laughed and we cried. But the one thing we never did was leave each other behind... I’ve told you that I would lay my life down to make sure you are ten toes down and happy on this earth,” Zaire Wade wrote.

“I don’t care what they think Z, you are my best friend and I love you kid, and if it means anything, just know there’s no love lost on this side.”