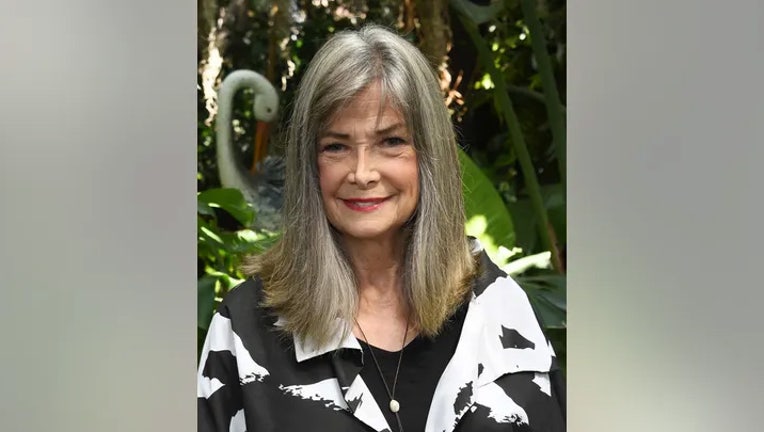 Delia Owens at a photo call for "Where the Crawdads Sing" June 7, 2022, in West Hollywood, California. ( Jon Kopaloff/Getty)

The movie adaptation of the best-selling novel "Where the Crawdads Sing" hit theaters Friday — but the author’s connection to a murder in Zambia that’s nearly three decades old shared the spotlight with opening day.

Delia Owens, 73, is wanted for questioning in connection to the deadly shooting of an alleged poacher back in the 1990s — a slaying that was captured on video and broadcast on American television, The Atlantic reported.

It has been described as a literal snuff film and the alleged shooter is Owens’ stepson, Jeffrey Goldberg wrote in a 2010 New Yorker exposé titled "The Hunted."

Authorities believe that Owens and her then-husband, Mark Owens, could be accomplices, who helped cover up the murder, and may have been involved in other crimes as part of their conservation efforts in the southern African country, according to Goldberg.

The disturbing revelations don’t appear to have overshadowed the film — and may have even helped promote it.

PR guru Juda Engelmayer, of Herald PR, called the controversy a lucky break. "If it is a coincidence, then it couldn’t have been planned better from a public relations and marketing point of view," he told Fox News Digital. "It has created even more buzz."

‘Where the Crawdads Sing' 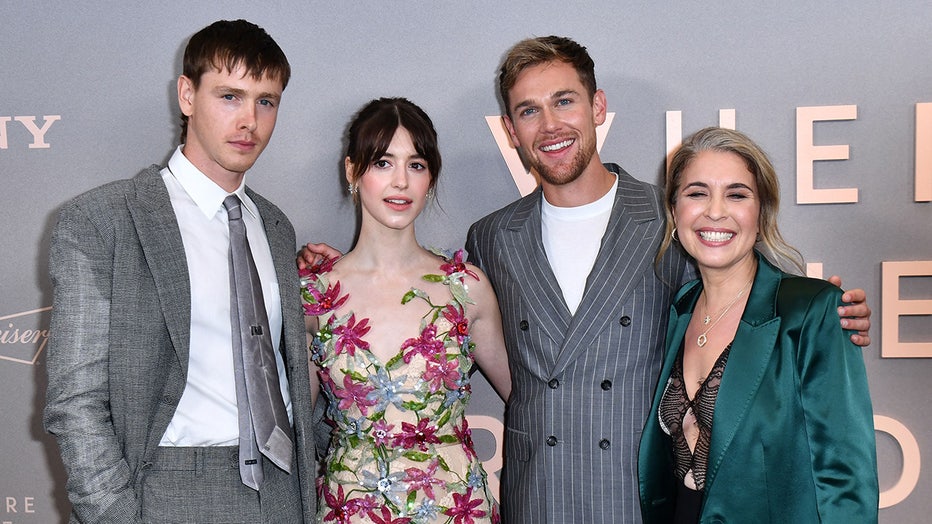 (L-R) English actors Harris Dickinson, Daisy Edgar-Jones, US actor Taylor John Smith and director Olivia Newman arrive for the World premiere of "Where the Crawdads Sing" at the Museum of Modern Art in New York, July 11, 2022. (Photo by ANGELA WEISS/

Owens became a literary superstar with the 2018 release of her debut novel about Kya, a young girl in the 1960s who is forced to raise herself in the marshes of North Carolina. She is shunned by society — an outcast trying to survive on her own.

When the body of local big shot Chase Andrews is discovered in the marshes, Kya is portrayed as a kind woman, who is unjustly arrested and tried for his murder but ultimately acquitted. The two were once lovers, and he had tried to sexually assault her weeks before his death.

In a stunning twist, readers learn in the final pages that she lured him to the marsh and actually did kill him.

The book has sold more 12 million copies and has spent 166 weeks on the New York Times’ Best Sellers List — setting the record for holding the No. 1 spot longer than any other novel.

Academy Award-winner Reese Witherspoon produced the movie, which stars Daisy Edgar-Jones as Kya, and features a title song by Taylor Swift. "It was so engrossing I just couldn’t put it down," Witherspoon said in an interview.

A modern day 'Heart of Darkness' 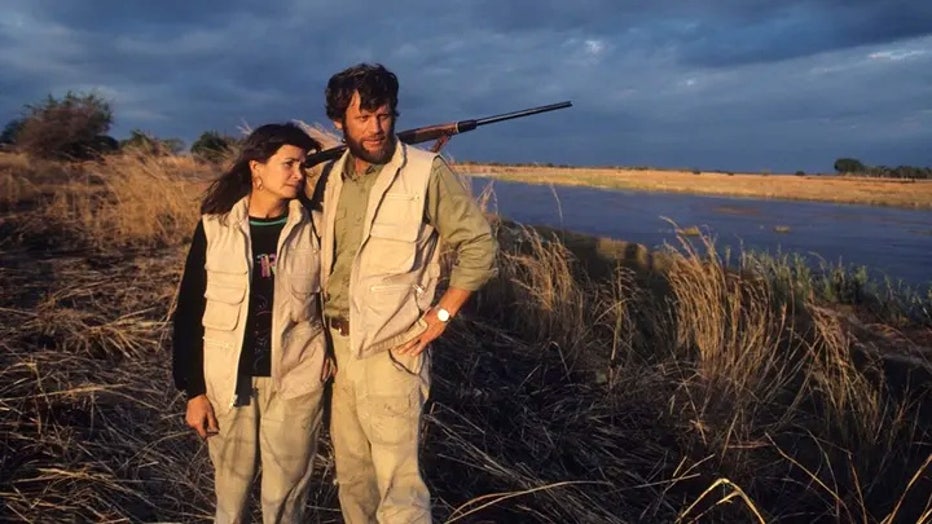 Delia Owens and Mark Owens, were conservationists in Africa who penned three memoirs about their wildlife adventures.

In the mid-1990s they lived in Zambia’s North Luangwa National Park running a conservation center that protected elephants from poachers.

Mark Owens came to command a unit of 60 game scouts that hunted poachers — buying their loyalty with guns, gear and money, according to Goldberg, who is now the editor-in-chief of The Atlantic.

The scouts operated outside the oversight of the Zambian government and answered to Mark Owens, saluting him when he approached — with some even calling him "dad."

The couples imperialistic and paternalistic relationship with the locals conjures up visions of Kurtz in "Heart of Darkness," which is ironic given that the novella's central character is an ivory trader.

The scouts beat suspected poachers and tied them to stakes, letting them bake in the sun, according to Goldberg.

Mark Owens’ child from a previous marriage, Christopher Owens, visited in the summer and was tasked with training the scouts in hand-to-hand combat. 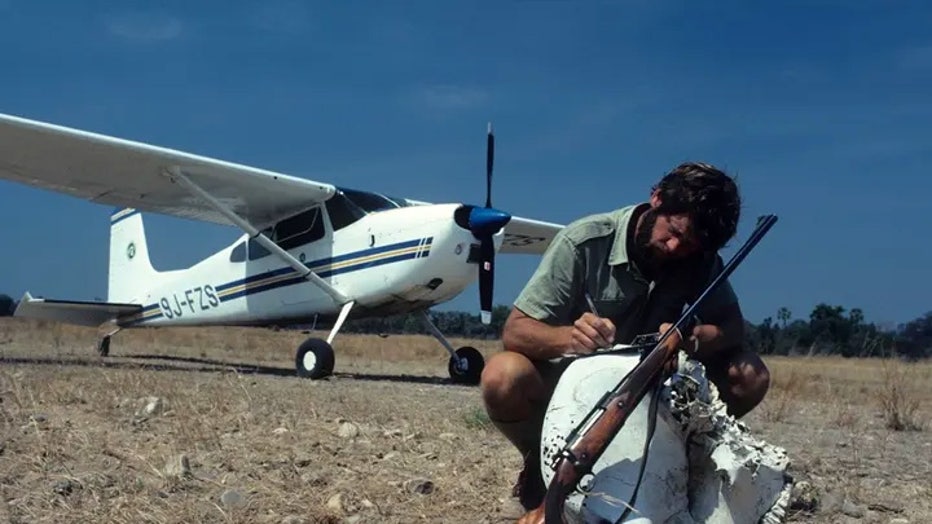 Mark Owens was accused of disposing of a murdered body in a lagoon in Zambia. (William Campbell/Corbis via Getty Images)

A critic of the couple characterized their attitude toward the region as "Nice continent. Pity about the Africans," Goldberg wrote.

Mark Owens had even bragged about killing poachers — an allegation he and his ex-wife have vehemently denied.

"To date I have flown eight airborne anti-poaching operations over your area, including four in which I inserted scouts on ambush," Owens allegedly wrote to a local friend, according to a letter obtained by Goldberg. "Two poachers have been killed and one wounded that I know of thus far, and we are just getting warmed up."

The couple was the subject of an episode of ABC’s "Turning Point" called "Deadly Game."

Goldberg in an essay published in The Atlantic last week called the documentary a "typical white-savior story" about two good-looking Americans on a mission to save elephants from greedy poachers and corrupt African officials. 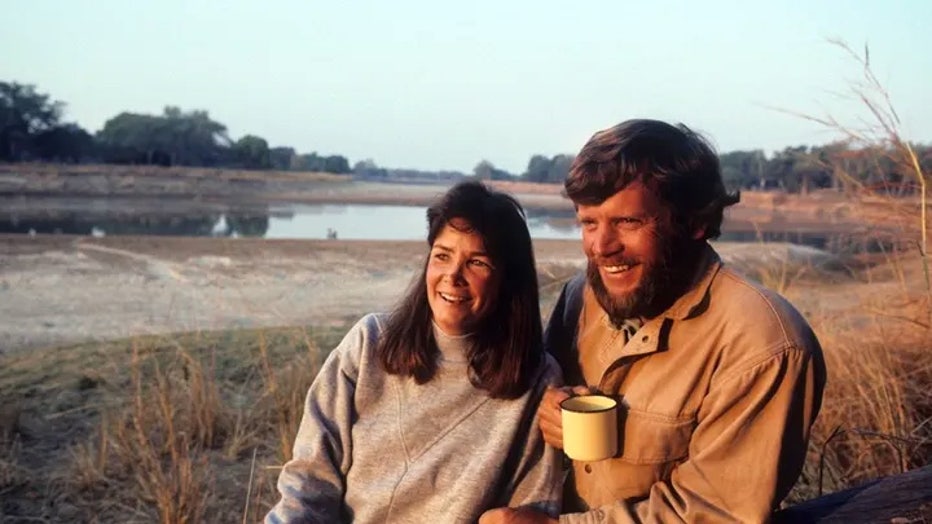 The ABC crew was accompanying Mark Owens’ son, then 25, and a scout as they patrolled for poachers in 1995.  Mark and Delia Owens were not present.

The group ambushed a suspected poacher when he returned to his campsite, with Christopher Owens allegedly firing the first shot.

After the first shot, the tape started rolling. The victim is shown collapsed on the ground and struggling to lift his head when a thin scout, his face blurred, fired at him again, according to Goldberg who obtained the video. 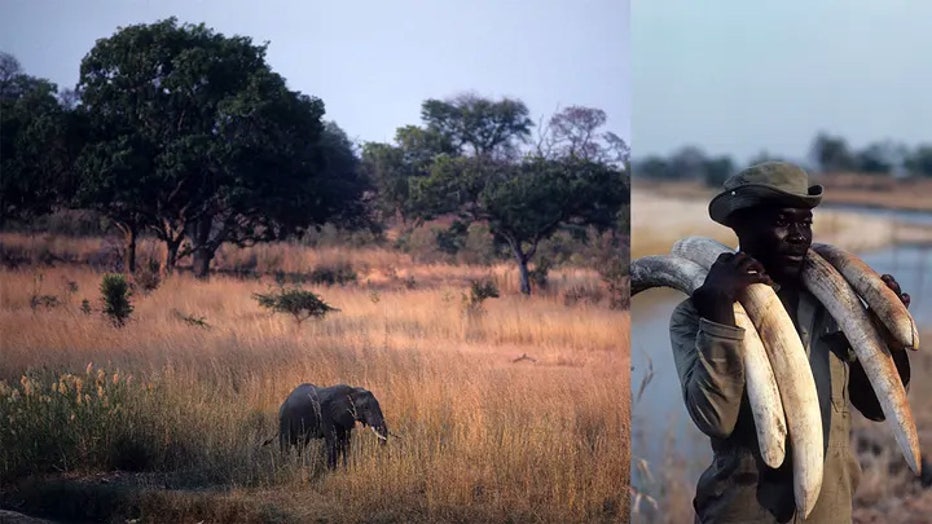 A photo combination of an elephant in North Luangwa National Park , and a game scout carrying ivory tusks, both taken in Zambia in 1990. recovered from poachers (William Campbell via Getty)

"The bodies of the poachers are often left where they fall for the animals to eat," a journalist says in a voice-over. "Conservation. Morality. Africa."

Then the camera zoomed in on the injured man as three more shots were fired from outside the frame, causing the man's body to jerk before he goes still.

After the killing was televised in the U.S., the Zambian government was outraged and launched a homicide investigation. The Owenses fled the country never to return.

He told Goldberg that Mark Owens had dropped him off – along with the scout and Christopher Owens and – at the remote location to look for poachers. They soon came across an empty campsite where they lay in wait.

When the suspected poacher returned, Christopher Owens opened fired before the camera started rolling, dropping the victim to the ground. He was standing off camera when he fired the three final shots.  His face is not shown in the footage. 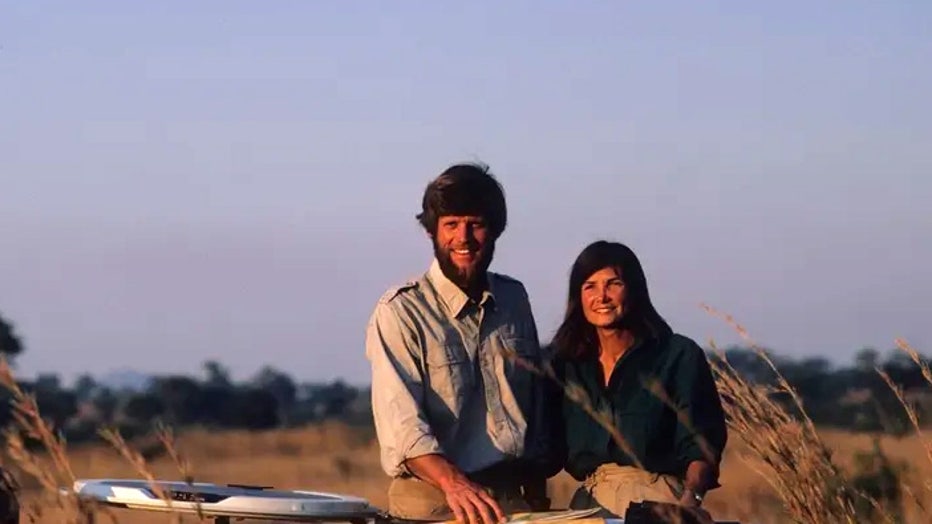 "It’s something that never should have happened," said Everson, who didn’t report the killing to Zambian officials.

After the murder, Mark Owens arrived by helicopter, put the body in the aircraft’s cargo net and dumped it in the ocean, according to Musole. Mark Owens has vehemently denied this claim.

Musole, now a senior police official, criticized ABC’s decision not to report the killing or cooperate with the investigation and called the crew accomplices, Goldberg wrote.

Zambian authorities told The Atlantic that the case remains open and Mark, Delia and Christopher Owens are all wanted for questioning in connection to the murder and for other possible criminal conduct.

"There is no statute of limitations on murder in Zambia," the country’s chief prosecutor Lillian Shawa-Siyuni told the magazine. "They are all wanted for questioning in this case, including Delia Owens." 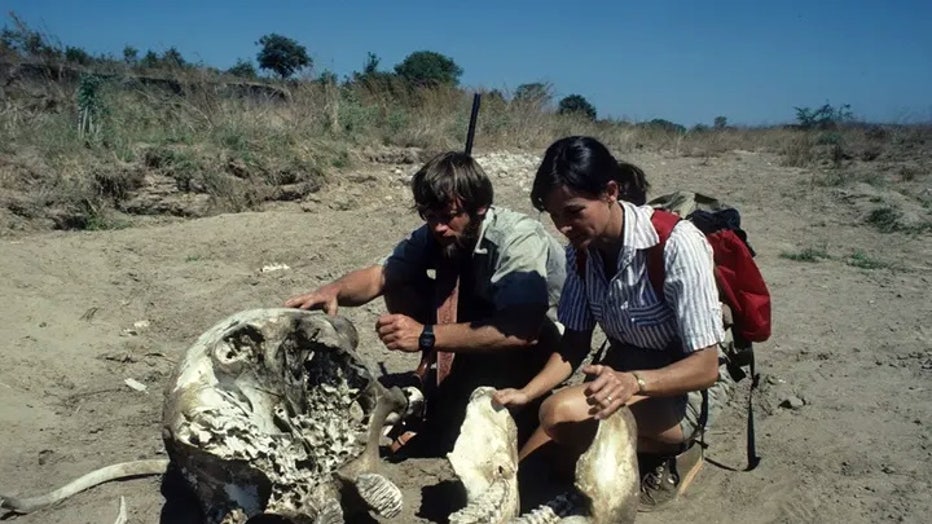 Delia and her former husband Mark were previously highlighted in a documentary that showed their lives as conservationists in Zambia. (William Campbell/Corbis via Getty Images)

Officials say Delia Owens may be a witness, co-conspirator or accessory to felony crimes.

"I want to know how Mark and Delia brought guns into Zambia and turned themselves into law-enforcement agents," Shawa-Siyuni said.

The Owenses have publicly denied they had anything to do with the murder or any other crime, and there is no extradition treaty with Zambia.

Is Crawdad's about Delia Owen's own life?

Many readers have said the themes in Crawdads echo aspects of Delia Owen’s own life in Zambia.

Journalist Laura Miller explored this in an article published in Slate in 2019 after the novel’s meteoric success. She noted that Kya, like Delia Owens, was an outcast who preferred the company of animals to people.

The jailhouse cat who keeps Kya company is named Sunday Justice—an African man who once worked for the Owenses as a cook.

In their memoir, Delia Owens recalled Sunday Justice once asking her what it was like to fly in an airplane.  "I myself always wanted to know, Madam, if you fly at night, do you go close to the stars?" he asked her, according to Owens. 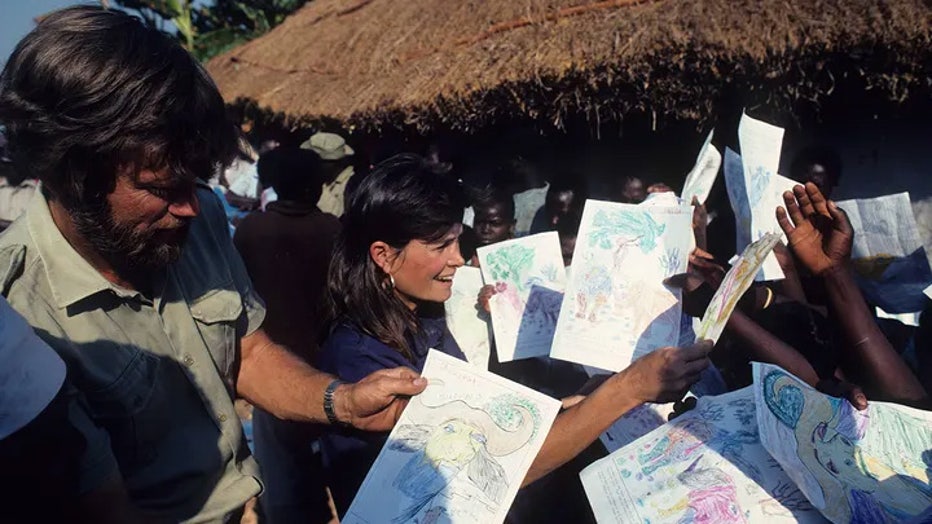 But Goldberg tracked down Justice, who laughed at the story, and said he flew on planes several times as a child and an adult before meeting the Owenses. A Black character named Jumpin’ in the novel is given a similarly simplistic and historically inaccurate treatment, Miller wrote.

The critic, though, pointed out that the most autobiographical part of the book may be Delia Owens' portrayal of the murder as a righteous act in the same way the former couple had justified their extrajudicial and violent anti-poaching operations.

"Owens’ own story appears to be one of love and righteousness run amok," Miller concluded.

"The Owenses have spent much of their lives trying to get as far away from humanity as they can, but theirs is an impossible quest: Like all of us, they bring humanity and its failings with them wherever they go."

Larry Fink and Sarah Rumpf contributed to this report.

Rebecca Rosenberg is a veteran journalist and book author with a focus on crime and criminal justice. Email tips to rebecca.rosenberg@fox.com and @ReRosenberg.