Music teacher toots trombone to scare bear away from school

A black bear that loitered outside a classroom in rural British Columbia was shooed away by a music teacher playing trombone on May 27, 2022. Credit: Makayla Mitchell via Storyful

SHAWNIGAN LAKE, Canada - A black bear caught lingering outside a classroom in Canada was scared away by a music teacher armed with a trombone.

The animal was spotted on May 27 outside St. John’s Academy Shawnigan Lake on Canada’s Vancouver Island. Video recorded by Makayla Mitchell at the private school shows the bear lingering on a wooden structure containing a garbage bin.

At first, a science teacher tried banging on a door to scare the bear away, Mitchell told Storyful. While the loud noises initially startled the bear, they didn’t prompt the animal to leave.

Eventually, the school’s music teacher, Tristan Clausen, can be heard in the video blowing on his trombone — leading the black bear to quickly scurry away.

"Rural teaching: I just chased a bear away with a trombone," Clausen posted to Facebook that day.

"That may just mean your trombone playing is kind of scary," one responder quipped. 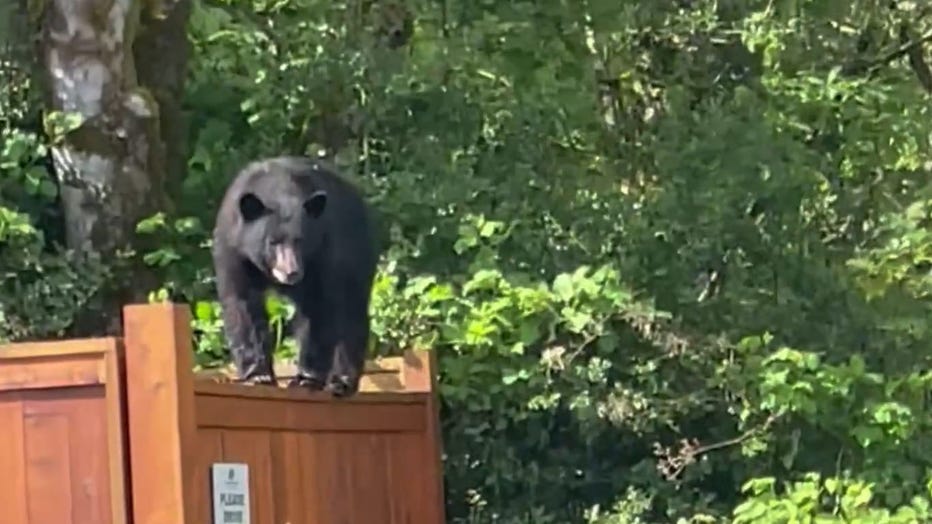 A screengrab from a video shows the black bear outside St. John’s Academy in Shawnigan Lake, British Columbia, on May 27, 2022. (Credit: Makayla Mitchell via Storyful)

It’s estimated that there are more than 120,000 black bears across Canada’s British Columbia province and over 7,000 on Vancouver Island alone.

Black bears are rarely aggressive toward people and typically go out of their way to avoid contact. But they are particularly attracted to foods that are abundant and "high in protein and energy" — often bringing them into contact with human beings, according to British Columbia’s Ministry of Environment, Lands and Parks.

Bears have an incredible sense of smell and are often lured by garbage, human food, pet food and bird feeders. Wildlife experts say to store all such items in secured areas away from bears and keep grills and smokers clean when not in use.

Last year, a man on vacation in Gatlinburg, Tennessee, found a black bear invader that broke into his car and caused significant damage. The group yelled loudly at the bear, eventually prompting it to run back into the woods. But it later returned to the group’s cabin with another bear.

"She attempted to get back inside my car," Joseph Deel said of the incident last summer. "I went back outside and yelled at the bear and threw things at her. The two bears then proceeded to leave the car and moved to the backyard of the cabin we were staying [in]."

Man scares away black bear invader from his car

A Tennessee man shooed a black bear from his car on July 10, 2021, after it broke into the vehicle. Credit - Joseph Deel via Storyful

For individuals who encounter a black bear, it’s advised to "make your presence known" by yelling and shouting in an attempt to scare the animal away, according to the Tennessee Wildlife Resources Agency.

"If a bear is reluctant to leave then proceed to throw rocks or other objects at the bear while continuing to yell. Portray yourself as the dominant animal and do not back down. If a bear is close enough that you feel uncomfortable, slowly back away, continuing to yell while watching the bear at all times. Never run from a black bear as this may trigger a natural response to chase," the Tennessee agency states.