WASHINGTON (FOX 5 DC) - Ryan Zimmerman, the first player to be selected by the Washington Nationals in 2005 and who has played for the team for 17 years, announced his retirement from baseball on Tuesday.

Zimmerman wrote a letter to family, colleagues and fans, thanking them for all their support over the course of his career.

"We have won together, lost together and, honestly, grown up together," he wrote. "We lost 100 games (twice), we won 90 games (four times), we moved into a new stadium, we failed to get out of the first round of the playoffs (four grueling times) and, of course, we experienced the magical World Series run of 2019 that no one will ever forget. Through all of the achievements and the failures you always supported me, and for that I will forever be grateful." 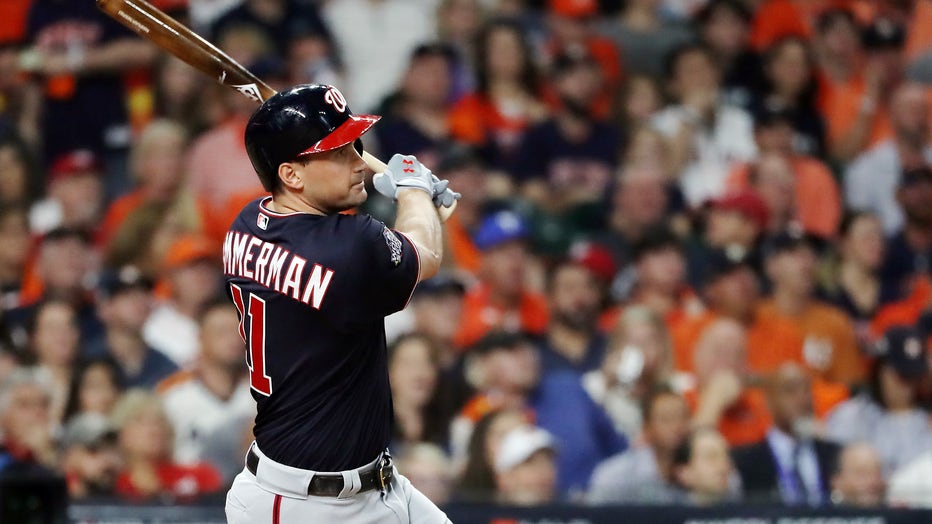 HOUSTON, TEXAS - OCTOBER 22: Ryan Zimmerman #11 of the Washington Nationals hits a solo home run against the Houston Astros during the second inning in Game One of the 2019 World Series at Minute Maid Park on October 22, 2019 in Houston, Texas. (Phot

Zimmerman says although his baseball career is coming to an end, he and his family will continue to be active members of the DMV community.

"You have given so much to us over the past 17 years; it is now time for us to give back to you," he says. "We look forward to continuing many of our community programs and starting new ones in the future. Our kids will be raised here, as this is now our home, and we couldn't be more excited."

"For 17 seasons, Ryan Zimmerman epitomized what it meant to be the Face of the Franchise," says Nationals President of Baseball Operations and General Manager Mike Rizzo. "He was an All-Star, Gold Glove and Silver Slugger winner, Comeback Player of the Year and World Series champion - but those accolades pale in comparison to his impact on our organization and in the community during his career. Ryan always carried himself with class, honor and respect and played the game for the name on the front of the jersey, not the one on the back. I want to personally congratulate Ryan on a fantastic career and wish him and the entire Zimmerman family all the best in retirement."

"It was truly an honor to manage and share a clubhouse with Ryan Zimmerman," says Nationals Manager Dave Martinez. "Like many around Major League Baseball, I had a lot of respect for Ryan from watching the way he played and competed as an opponent. It wasn’t until I came to Washington that I learned of his true impact on this organization, the fans and the community. He was a fierce competitor but also a calming presence when we needed it most. Ryan's numbers and accomplishments speak for themselves, but the way he led by example and was respected not only in our clubhouse but around the game - that is what I will remember most about his career. Not only was he a player I enjoyed managing, but he’s also become a great friend. Congrats, Ryan. I wish you, Heather and the kids nothing but the best."

Zimmerman was selected fourth overall in the 2005 First-Year Player Draft out of the University of Virginia and eventually became Washington’s all-time leader in nearly every offensive category. He recorded 1,846 hits while posting a career .341 on-base percentage and a .475 slugging percentage.

During Washington’s run to the 2019 World Series, Zimmerman hit safely in 10 of Washington’s 16 Postseason games. He hit the first World Series home run in Nationals history in the second inning of Game 1.

In 2006, Zimmerman established the ziMS Foundation to raise money and awareness for programs benefiting those afflicted with Multiple Sclerosis. Serving as the foundation’s president, Zimmerman is actively involved in decision-making and donates his time, money and image to promoting the Foundation. The foundation has raised $3.5 million for organizations dedicated to the fight against MS.

In April of 2020, Ryan and his wife Heather founded the Pros for Heroes COVID-19 Relief Fund, a campaign to provide health care professionals with support, resources and meals during the early stages of the COVID-19 pandemic.