PHILADELPHIA - Ron Rivera held a football in his hand and choked back tears in the locker room as he tried to address the Commanders. He could barely get through his words. This win was for his mom, who died two weeks ago.

"My mother would have been proud," Washington's coach said as he walked off to an ovation from his players.

Rivera had reason to feel appreciative of this effort. The Commanders navigated another week of turmoil — this time, team owner Dan Snyder was sued by the District of Columbia — and played the role of spoiler, thwarting yet another perfect season.

The Commanders kept the Philadelphia Eagles off-kilter most of the game and forced four turnovers against one of the most ball-secure teams in the league in a 32-21 win on Monday night. The Eagles lost for the first time in nine games. 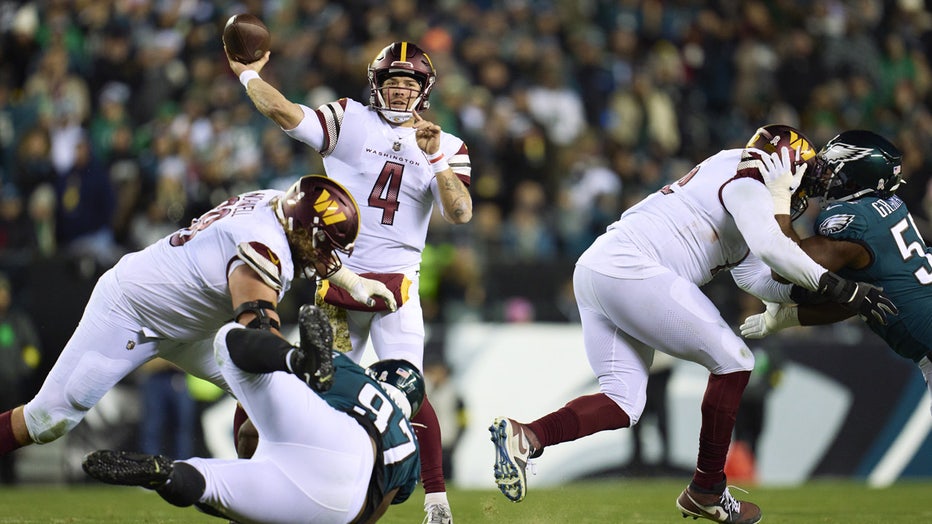 Taylor Heinicke #4 of the Washington Commanders drops back to pass against the Philadelphia Eagles during the first half at Lincoln Financial Field on November 14, 2022 in Philadelphia. (Photo by Cooper Neill/Getty Images)

The win over an undefeated team might sound familiar — Washington (then known as the Washington Football Team) knocked off Pittsburgh in 2020 and ended the Steelers' 11-0 start.

As Rivera walked off in tears, wide receiver Terry McLaurin rallied the team in the locker room and exclaimed, "We set the damn tone! We took it to them!"

Taylor Heinicke thrust his arm in the air in celebration and put his fingers to his lips to shush the Eagles and the haters as he walked off the field a winner and improved to 3-1 this season as a starter. He threw for 211 yards, no touchdowns and one interception while steering clock-killing drives that sparked the upset.

"It's probably the biggest win of my career," he said. "It's a division opponent, undefeated at their place, Monday night. It can't get much better than that."

Heinicke again started for injured QB Carson Wentz, the much-maligned former Eagles QB who did play a key role in helping them win a Super Bowl in the 2017 season. Wentz is still on injured reserve following surgery to repair a broken finger. Wentz, who washed out last year in Indianapolis could find himself fighting for the starting QB spot whenever he returns.

The Super Bowl champion QB's endorsement creates buzz, but won't matter much to Rivera. McLaurin had eight catches for 128 yards and the Commanders got 1-yard rushing touchdowns from Antonio Gibson and Brian Robinson. Joey Slye kicked field goals of 44, 58, 32 and 55 yards. Long drives, longer field goals and no longer a long shot for the playoffs.

Heinicke said he understood the team traded for Wentz to become the starter and that he could return Sunday against Houston.

"Whatever decision they want to make, let's go," he said. "If I'm backing up Carson next week, great. I'm going to help him any way I can to get ready for the Texans game."

In three starts coming into the game, the 29-year-old Heinicke threw for 629 yards and five touchdowns, and rushed for 50 yards and a TD. Heinicke also had a costly fourth-quarter interception in last week’s 20-17 home loss to Minnesota that snapped a three-game winning streak. He had thrown three picks in those three starts.

"Even just from last year, I feel a lot more comfortable out there, a lot more confident," Heinicke said. "I just understand what I need to do and not to do in order to win games. To get a win like this, it's just a huge confident boost for the team."