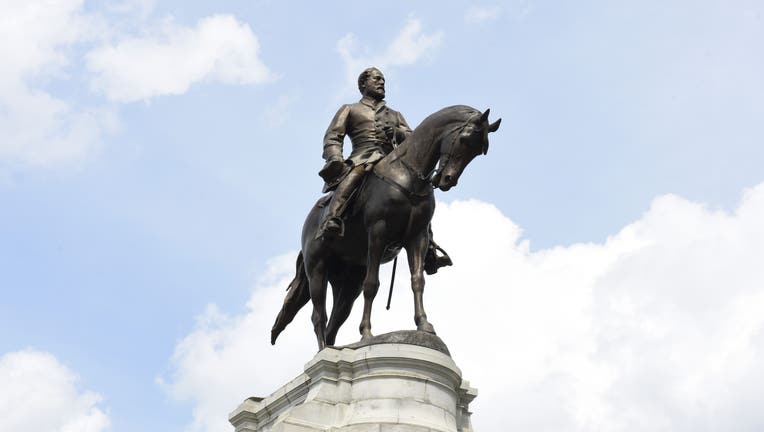 The statue of Confederate General Robert E. Lee on Monument Avenue is pictured on June 6, 2020 in Richmond, Virginia. (Photo by Vivien Killilea/Getty Images)

RICHMOND, Va. (AP) - A lawsuit seeking to prevent Virginia Gov. Ralph Northam’s administration from removing an enormous statue of Confederate Gen. Robert E. Lee can proceed, a judge ruled Tuesday, clearing the way for a trial in the fall.

Richmond Circuit Court Judge W. Reilly Marchant rejected much of the state’s motion to dismiss a lawsuit filed by a group of property owners along the residential boulevard where the statue is situated. He did narrow the claims that can proceed, dismissing one count entirely and dismissing two plaintiffs from another claim.

The decision at least delays Northam's plan, which he announced in early June, citing the pain felt across the country about the death of George Floyd, a Black man who died under the knee of a white Minneapolis police officer as he struggled to breathe.

The statue, which sits on a state-owned parcel of land along Richmond’s historic Monument Avenue, was unveiled before a massive crowd in May 1890, at a time when the Civil War and Reconstruction were over and Jim Crow racial segregation laws were on the rise.

Now cloaked in graffiti, it and other nearby monuments have become a rallying point during social justice protests and occasional clashes with police.

A trial on the remaining claims is expected Oct. 19, according to Democratic Attorney General Mark Herring's office. Herring has vowed to continue the fight in court as long as it takes to see that the statue is removed.

“Attorney General Herring remains committed to ensuring this divisive and antiquated relic of a bygone era is removed as quickly as possible,” his spokeswoman Charlotte Gomer said in an email.

The 21-foot-high (6.4-meter-high) equestrian statue, which the state has said weighs about 12 tons (11 metric tonnes), sits atop a pedestal nearly twice that tall.

Floyd’s death sparked a renewed wave of Confederate monument removals across the U.S., just like a violent 2017 white supremacist rally in Charlottesville before it and a mass shooting at a historic African American church in South Carolina before that.

Critics of the statues say they distastefully glorify people who fought to preserve slavery in the South. Others say their removal amounts to erasing history.

Four other prominent statues of Confederate leaders have been taken down from city property along the avenue this summer.