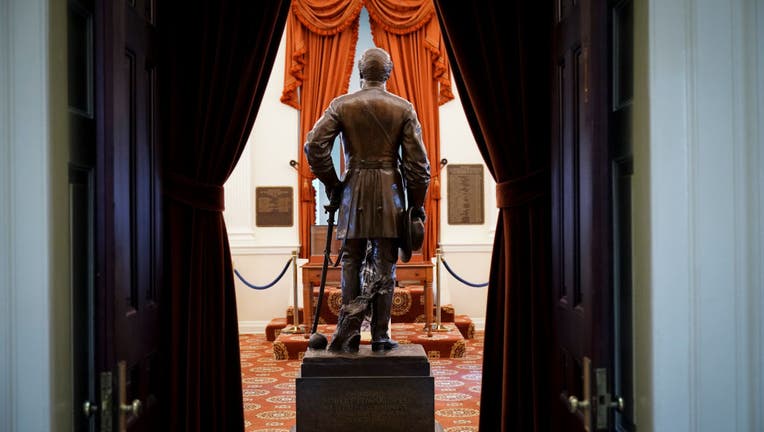 RICHMOND, VA - FEBRUARY 07: A statue of Confederate General Robert E. Lee stands in the Old House Chamber at the Virginia State Capitol, February 7, 2019 in Richmond, Virginia. Virginia state politics are in a state of upheaval, with Governor Ralph N

RICHMOND, Va. - Virginia has removed from its iconic state capitol the busts and a statue honoring Confederate generals and officials. That includes a bronze statue of Gen. Robert E. Lee positioned in the same spot where he stood to assume command of the state’s armed forces in the Civil War nearly 160 years ago.

They are the latest Confederate symbols to be removed or retired in the weeks since the death of George Floyd at the hands of Minneapolis police sparked a nationwide protest movement.

Virginia House Speaker Eileen Filler-Corn, a Democrat, quietly ordered the Lee statue and busts of generals J.E.B. Stuart, Stonewall Jackson, Confederate President Jefferson Davis, and others removed from the historic Old House Chamber. A moving crew worked through the night Thursday — carefully removing the monuments and their plaques and loading them into a truck and taking them to an undisclosed location.

Richmond Mayor Levar Stoney on Wednesday ordered the immediate removal of all Confederate statues in the city.

The stealth approach avoids the possibility of protests or a lawsuit to keep the monuments in place, but may prompt criticism that the monuments were moved without public discussion.

“Virginia has a story to tell that extends far beyond glorifying the Confederacy and its participants,” Filler-Corn said in a statement. “Now is the time to provide context to our Capitol to truly tell the commonwealth’s whole history.”

Designed by Thomas Jefferson, the Virginia State Capitol is the first state capitol to open after the American Revolution and was used as the Confederacy’s Capitol during much of the Civil War.

A lawsuit has delayed that statue’s removal, but other Confederate monuments on the street — once one of the most prominent collection of tributes to the Confederacy in the nation — have already come down. And earlier this week, the U.S. House approved a bill to remove statues of Gen. Robert E. Lee and other Confederate leaders from the U.S. Capitol. The bill’s prospects in the Senate are uncertain.

In Virginia, the Old House Chamber was where lawmakers first met when the Capitol opened in 1788 and was used as the House’s meeting place for more than 100 years before the Capitol building was expanded. It is not currently used for official purposes when the legislature meets.

The chamber’s history is long and varied — then-Chief Justice of the Supreme Court John Marshall presided over a trial there that saw former Vice President Aaron Burr acquitted of treason — but much of the iconography in the room is devoted to Confederates.

Virginia delegates voted in the chamber to secede from the Union in April 1861. A few days later, Lee entered the room to take formal command of the state’s military.

“Trusting in almighty God, an approving conscience, and the aid of my fellow citizens, I devote myself to the service of my native state, in whose behalf alone will I ever again draw my sword,” Lee said, according to an inscription on the statue.

Seven years later, after the South lost the war, it was the same room where a new constitutional convention met that included Black delegates for the first time.

Like many Confederate monuments, most of those recently removed from Virginia’s Capitol were erected decades after the Civil War. They were commissioned and built during the Jim Crow era, when states imposed new segregation laws, and during the “Lost Cause” movement, when historians and others tried to depict the South’s rebellion as a fight to defend states’ rights, not slavery.

The Lee statue was approved in 1928 with the help of then-Gov. Harry Byrd, who would later go on to lead the state’s Massive Resistance to racially integrated schools. It’s $25,000 price tag (about $370,000 currently) was paid for by the state, donations and an in-kind donation from the sculptor.

Busts of Davis and Alexander Stephens, the vice president of the Confederacy, were donated to Virginia in the 1950s by Mississippi and Georgia.

Filler-Corn also announced she’s appointed Del. Delores McQuinn to lead a new advisory group to advise the speaker on “possible future actions” of other historical artifacts controlled by the House.

The House does not control Capitol Square, the outdoor area around the Capitol, which includes statues of Stonewall Jackson and William “Extra Billy” Smith, a former governor and Confederate brigadier general. The authority to remove those statues is a matter of debate and may need the full approval of the legislature.

The Confederate monuments are not the only tributes to losing causes in and around the Capitol, a building built with slave labor where almost every portrait hanging on the walls is of a white man.

A large statue of Byrd, the arch segregationist, sits on Capitol Square and two portraits hanging prominently in the Capitol.

In the House chamber, directly behind where House speakers preside, is a plaque honoring Nathaniel Bacon. He was wealthy colonist who led a failed rebellion in the 1670s whose aims including the unfettered killing of Indians and the seizing of their lands.