Northern&nbsp;Virginia&nbsp;residents hoping to get a jump on the first day of early&nbsp;voting&nbsp;in the Commonwealth were unexpectedly met with hour-long waits.

FAIRFAX COUNTY, Va. (FOX 5 DC) - Northern Virginia residents hoping to get a jump on the first day of early voting in the Commonwealth were unexpectedly met with hour-long waits.

Friday marked Day 1 of early voting for the 2020 Election in the Commonwealth of Virginia. Maryland and Washington D.C. begin early voting next month.

READ MORE: Everything you need to know about voting in Virginia today county by county

In Virginia, state and local officials have relentlessly promoted voting by mail heading into the fall, but that did not stop people from exercising the tried and true method on Friday.

“Get out early or do it by mail because we don’t want these lines November 3rd,” said Victor Gavin, who on Friday, encouraged everyone to vote early whether in-person or by mail.

When asked why he decided to bring his family rather than vote by mail, Gavin answered, “It gets rid of your anxiety – the anxiety that the nation is felling when it comes to this election.”

“I felt a sense of expedience was necessary, if nothing more, to satisfy my own sense of responsivity,” said Al Aportela.

All three waited for three to four hours outside of the Fairfax County Government Center polling location.

FOX 5’s SKYFOX Drone filmed the long lines stretching out from the government building since the site opened at 8 a.m.

“It was worth it,” the couple said, leaving the area.

Director of Elections for Fairfax County, Gary Scott, told FOX 5 they were slightly surprised by the turnout and were only anticipating around 400 voters.

Northern&nbsp;Virginia&nbsp;residents hoping to get a jump on the first day of early&nbsp;voting&nbsp;in the Commonwealth were unexpectedly met with hour-long waits.

By 4 p.m., a spokesperson with the county told FOX 5 they counted around 800 votes. 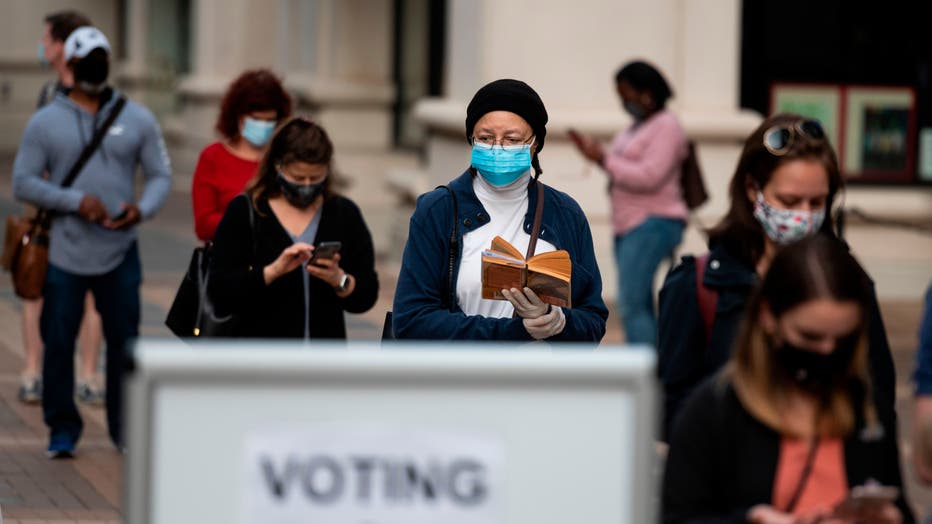 “They’ve given several warnings throughout the time here and people, for the most part, have not left so I think it’s just showing people are happy to be able to do something in the right direction, they feel,” said Chad Singleton, also not willing to leave the line.

Ramona Gavin, with her husband Victor, told FOX 5, “I haven’t missed a vote since I was 18 and I always vote in person because I leave so exhilarating. This is what I think makes us a wonderful country.”

Outside, you heard people exchanging phone numbers and social media handles, making new friends after hours of waiting with strangers. Some tell FOX 5 there were also a lot of civil conversations being had between different people.

Gary Scott says people can feel confident voting early via absentee, but if you change your mind and want to vote early in-person, bring that mail-in ballot with you.

He also says the middle of the week is not as busy. Fridays and Saturdays are known to be the busiest, Scott tells FOX 5.

Election officials say in 2016, around 350 voters showed up to the polls on the first day in the Commonwealth. Today, officials say around 1,500 people came to cast their ballot in Fairfax alone –– that’s almost five times as much as four years ago.

Officials say that the expansion of no-excuse absentee voting could have triggered this wave of early voting in that the new lifted restrictions could have enticed first-time voters to come out.