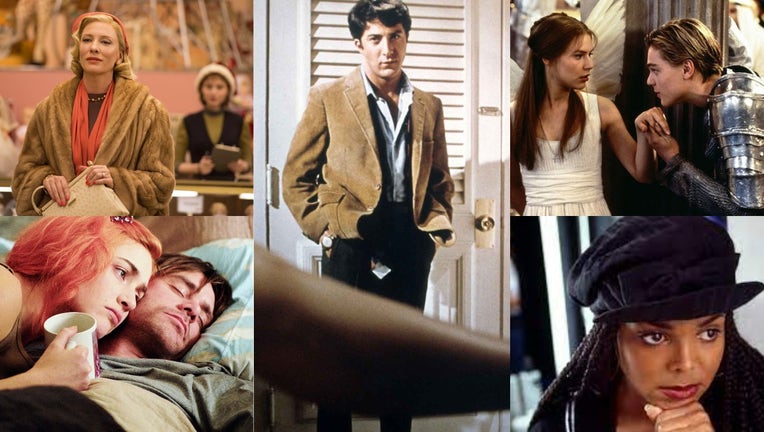 Left, from top: Cate Blanchett and Rooney Mara in “Carol,” Kate Winslet and Jim Carrey in “Eternal Sunshine of the Spotless Mind.” Center: Dustin Hoffman in “The Graduate.” Right, from top: Claire Danes and Leonardo DiCaprio in “William Shakespeare’s

CHICAGO - Whether they’re set in England in the 1800s, New York in the 1950s or Vienna in the ‘90s, there’s nothing like a romantic drama to stir the soul and jerk some tears. So to celebrate Valentine’s Day, we’ve rounded up a list of some of the best romantic dramas out there — all streaming for free on Tubi.

These 12+ films cover over four centuries of human history and 55 years of Hollywood filmmaking, proving that some romantic stories are simply timeless. So read on to find your perfect Valentine’s Day movie match. And if you’re in the mood for something lighter, you can also check out our guide to the best romantic comedies streaming free on Tubi.

If the only lasting effect of Baz Luhrmann’s "William Shakespeare’s Romeo +Juliet" was its insertion of the Cardigans song "Lovefool" into the cultural consciousness, we would all still owe it a debt. But Luhrmann’s hugely influential film did much more than that: it solidified Claire Danes and a pre-"Titanic" Leonardo DiCaprio as both talents-to-watch and teen hearthrobs, put Danes in one of the most iconic costumes of the era (angel wings, anyone?) and gave the criminally-underrated Harold Perrineau a chance at the rarest of hat tricks: nailing a drag performance, a comedic turn and an epic death scene, all in the same movie. Young hearts run free!

If you’re looking for a nuanced critique of the monarchy and/or Imperialism, you’ll want to skip right past "The Young Victoria" — but lovers of grand ballgowns, complex hairstyles, epic romances and Emily Blunt will find plenty to admire. Written by "Downton Abbey" scribe Julian Fellowes and directed by the late Jean-Marc Vallée ("Big Little Lies"), this 2009 historical drama centers on the young Princess Victoria (Blunt), who is next in line for the British throne but feels like less a powerful figure than a pawn in the games of others. Into this fraught dynamic strolls Albert (Rupert Friend), who enters Victoria’s orbit at the behest of one of those game-players, but whose connection with the woman who would be queen seems genuine. (Spoiler: these two crazy kids work it out.) Expect intrigue, opulence and a murderer’s row of great British character actors.

Before Hugh Grant became the king of rom-coms in movies like "Four Weddings and a Funeral," "Notting Hill" and "Music and Lyrics," he had his breakout debut in this sensitive Merchant–Ivory romance about young men in Edwardian England. Grant plays Clive Durham, the aristocratic student who falls for his friend Maurice Hall (James Wilby) at Cambridge in 1909. The two men strike up a complicated affair that forces them to decide what they really want for their futures. Rupert Graves also stars as a third romantic player in this poignant drama based on E. M. Forster’s classic novel. Call it the original "Call Me By Your Name."

Look, there’s no way around it, this is a very strange fantasy movie and not all of it works. But if watching Colin Farrellsmolder romantically across two different time periods is your thing then you won’t be disappointed. Farrell plays Peter Lake, a thief raised by a turn-of-the-century gangster (Russell Crowe) who just happens to be a supernatural demon with a grudge. One ride on a magical horse later and Peter finds himself in a Gilded Age meet-cute with a wealthy, terminally ill young woman named Beverly Penn (Jessica Brown Findlay). What follows is an earnest romantic fable about love, miracles, second chances and 100-year time jumps. Oh, and did we mention that Will Smith plays the Devil?

This achingly romantic period drama from director Todd Haynes and screenwriter Phyllis Nagy (adapting Patricia Highsmith’s 1952 novel "The Price of Salt") may go down as one of the great Oscar snubs of all time — six nominations, no wins, and exclusion from the Best Picture category. That means Haynes, stars Cate Blanchett and Rooney Mara and the rest of the cast and crew will merely have to content themselves with being part of one of the most celebrated and moving dramas of the century so far. Blanchett plays the titular Carol, a woman going through a brutal divorce; Mara is Therese, a young aspiring photographer working in a department store that Carol visits while Christmas shopping for her daughter. Carol forgets her gloves (or does she?) and the sparks that fly across the counter catch fire when introduced to the oxygen of the outside world. Haynes’ unapologetically queer film, heavily influenced by the great photographers of the 1950s, is swoon-worthy and stylish — Mara and Blanchett are almost as good at wearing incredible costumes as they are at acting, and they’re very, very good at acting. Who needs Oscars?

It’s hard to find a more influential coming-of-age romance than "The Graduate." The classic Mike Nichols dramedy set the template for a whole new kind of funny, poignant, wistful tale about young adult ennui. And movies ranging from "Harold and Maude" to "Garden State" to "500 Days of Summer" (not to mention "Wayne's World 2") all owe it a debt of graduate — er, gratitude. Dustin Hoffman is the aimless post-grad looking for purpose; Anne Bancroft is the older married woman trying to seduce him; and Simon & Garfunkel are the musical voice of this era-defining film. Here’s to your Mrs. Robinson, indeed.

Not only does the legendary Sidney Poitier star in this 1970s romantic drama, he also directed it too. A poignant cross between "Roman Holiday" and "Love Story," "A Warm December" stars Poitier as a widowed single father on a trip to London. There he meets Catherine (Ester Anderson), an African princess on a diplomatic visit. The two quickly fall for each other, but their romance is complicated by the fact that Catherine is dying of sickle cell disease. With her time limited and her duty to her county weighing heavily on her mind, Catherine must decide how she wants to spend the "December" of her life.

Music superstars Janet Jackson and Tupac Shakur team up in this lyrical drama from legendary filmmaker John Singleton("Boyz n the Hood"). She’s a poet grieving the shooting death of her boyfriend. He’s a flirtatious mailman/aspiring musician trying to build a better life for his daughter. Thrown together on a road trip from South Central, Los Angeles to Oakland, the duo initially bicker before slowly realizing how much they have in common. But can that spark survive the hardships of life? Maya Angelou wrote the original poems featured in this romantic hidden gem.

It’s one thing to capture lightning-in-a-bottle magic on screen. It’s another to do it three times across the span of 18 years. Along with the 2013 third installment, "Before Midnight," Richard Linklater’s "Before" trilogy is a masterclass in romantic filmmaking. Jesse (Ethan Hawke) and Céline (Julie Delpy) are two young travelers who meet on a train and impulsively decided to spend an evening roaming the streets of Vienna together before his flight leaves in the morning. The series’ gentle "walk and talk" premise has inspired any number of romantic dramas (including Chris Evans’ directorial debut "Before We Go"). But few can rival the enchanting perfection of Linklater’s modern classics.

For better or for worse, "A Walk to Remember" is the movie that really kicked off the Nicholas Sparks adaptation craze — paving the way for romantic dramas like "The Notebook," "Safe Haven" and "The Choice." (It’s the first Sparks spark, if you will.) And since "A Walk to Remember" just celebrated its 20th anniversary, this is the perfect time to revisit it in all its melodramatic glory. Mandy Moore stars as Jamie Sullivan, the self-possessed teenage daughter of a Baptist minister. Thrown together with popular, rebellious classmate Landon Carter (Shane West), Jamie begins to influence him for the better, even as their burgeoning teen love story has a ticking time clock. Throw in six songs performed by Moore and you’ve got the makings of a beloved early aughts weepy.

Eternal Sunshine of the Spotless Mind (2004)

The only reason not to call "Eternal Sunshine of the Spotless Mind" Charlie Kaufman’s masterpiece is that he’s got several masterpiece-level films in his rearview mirror (and more, one assumes, straight ahead). Still, even by Kaufman’s standards, this Michel Gondry-directed, sci-fi-flavored romantic drama (which earned the auteur an Oscar for Best Original Screenplay) is a towering, inventive and deeply-felt achievement. Kate Winslet and a never-better Jim Carreyplay lovers whose tumultuous bond sends them, for different reasons, into the offices of Lacuna Inc., a firm that can eradicate memories of a specific person from a patient’s mind. When Joel (Carrey) learns that Clementine (Winslet) has had him erased, he and his broken heart decide to undergo the same procedure, but the process sends him spiraling throughout his own memories. He reconsiders — but, uh, he’s already unconscious and there’s no turning back. By turns devastating and unabashedly romantic, "Eternal Sunshine" isn’t just one of the most original love stories ever captured on screen. It’s also one of the best

About the writer: Allison Shoemaker is a Chicago-based pop-culture critic and journalist. She is the author of "How TV Can Make You Smarter," and a member of the Television Critics Association and the Chicago Film Critics Association. She is also a producer and co-host for the Podlander Presents network of podcasts. Find her on Twitter and Instagram at @allisonshoe. Allison is a Tomatometer-approved Top Critic on Rotten Tomatoes.

About the writer: Caroline Siede is a film and TV critic in Chicago, where the cold never bothers her anyway. A member of the Chicago Film Critics Association, she lovingly dissects the romantic comedy genre one film at a time in her ongoing column When Romance Met Comedy at The A.V. Club. She also co-hosts the movie podcast, Role Calling, and shares her pop culture opinions on Twitter (@carolinesiede).

More romances streaming (for free!) only on Tubi

10 Truths About Love (2022): Camilla Belle stars as Carina Franklin, a thriving romance columnist who has her own love life totally figured out — at least until her longtime boyfriend dumps her. Even worse, her editor insists on giving her column a "male perspective" and hires a writer named Liam (David Lafontain) to balance her out. When the two new co-workers clash, Liam sets out to demonstrate that his tactics work by helping Carina win back her ex. Of course, in trying to prove each other wrong, Liam and Carina might just realize how right they really are for each other. "10 Truths About Love" is a Tubi Original. Rated TV-14. 90 minutes. Dir: Brian K. Roberts. Featuring: Camilla Belle, David Lafontaine, Jennifer De Lucia, Karn Kalra, Paula Rivera, David Keeley.

Howard High (2020): A modern-age "Bring It On," "Howard High" is an energetic teen musical that follows a high school performance group who must compete against a rival school in order to save their arts program. The crowd-pleasing film from "You Got Served" director Chris Stokes is inspired by his 2020 TV mini-series of the same name, which is also streaming on Tubi. With its talented cast of up-and-comers, "Howard High" shines a light on the challenges that school arts programs face in underfunded neighborhoods — all through the power of song and dance. "Howard High" is a Tubi Original. Rated TV-14. 102 minutes. Dir: Chris Stokes. Featuring: Chrissy Stokes, Veronika Bozeman, Lindsay Diann, Jarell Houston, Dylan Mooney.