The man accused of shooting and killing three University of Virginia football players is expected to appear before a judge Wednesday. Christopher Darnell Jones Jr., 22, is facing three counts of second-degree murder and firearms charges in connection with the brutal killings of Devin Chandler, Lavel Davis Jr., and D'Sean Perry. Authorities say Jones Jr. gunned down the three student-athletes onboard a charter bus as they all returned from seeing a play in Washington, D.C. He will remain in jail and is expected to appear in court via video link.

CHARLOTTESVILLE, Va. - The man accused of shooting and killing three University of Virginia football players appeared before a judge Wednesday, as prosecutors revealed more information about the incident.

During the hearing, prosecutors revealed that a witness saw the suspect in the case, Christopher Darnell Jones Jr., open fire on a bus that was returning from a field trip in Washington D.C. The witness described to police how the gunman targeted specific victims — many of them football players — shooting one of them as he slept. The witness also identified Jones Jr. as the gunman in the case.

Jones Jr., a former football player, appeared by video link from a local jail for the court hearing Wednesday.

He did not enter a plea to the numerous charges he faces and said he plans to hire an attorney. A judge ordered him held without bond and appointed a public defender to represent him until he secures private counsel.

In addition to the three football players who were killed, the violence Sunday night left another player and a student injured. The victims who were killed were identified as Devin Chandler, Lavel Davis Jr., and D'Sean Perry.

Jones Jr., 22, is facing three counts of second-degree murder and firearms charges in connection with the brutal killings. Jones Jr. will also face two counts of malicious wounding and additional gun-related charges in the shooting of two other students who remain hospitalized. One of the injured was identified as Michael Hollins Jr. while prosecutors identified the fifth victim as Marlee Morgan, a sophomore at the university.

The shooting triggered a massive manhunt Sunday night into the following morning. Police conducted a building-by-building search of the campus while students sheltered in place before a lockdown order was lifted late Monday morning.

Jones Jr. was taken into custody Monday by Henrico Police in Richmond, Virginia, more than twelve hours after the shooting.

According to the statement from the store, despite the unsuccessful attempts, Jones Jr. later purchased two guns from Dances Sporting Goods. Both of those purchases happened in 2022.

You can read the statement in full below:

"We were saddened to learn of the tragic events that took place in Charlottesville, Virginia on Sunday evening and our thoughts are with the three young men who tragically lost their lives and the two students who were wounded in this senseless act of violence. Christopher Darnell Jones Jr. purchased two firearms in 2022 from Dance’s Sporting Goods, a Glock, model 45, 9mm pistol with an additional magazine on July 8, 2022 and a Ruger, model AR-556, 5.56 caliber rifle on February 19, 2022. There was nothing noteworthy about these purchases. Christopher Darnell Jones Jr. attempted to buy a firearm on two separate occasions in 2018 and 2021 from Dances Sporting Goods; neither of the sales/transfers were completed. On December 31, 2018, Jones attempted to purchase a handgun and was under the age of 21 and on July 8, 2021 he attempted to purchase a S&W model M&P15-22, .22 caliber rifle but failed the background check. Jones DID NOT receive either of the firearms he attempted to purchase and both attempted purchases were forwarded to the Virginia State Police for further action. We will continue to assist law enforcement as they attempt to make sense of this terrible tragedy and we pray for the victims of this tragedy."

FOX 5 reached out to Virginia State Police about the attempts from Jones Jr. to buy guns in the past. VSP officials say he is actively being investigated for his attempted purchase of a gun on July 8, 2021, at Dances Sporting Goods. According to VSP, the purchase was denied due to a pending charge that was later reduced to a misdemeanor. Once the charge was reduced, officials say the prohibition against Jones Jr. buying guns was lifted for future purchases, which allowed him to make the two gun purchases he allegedly did in 2022. 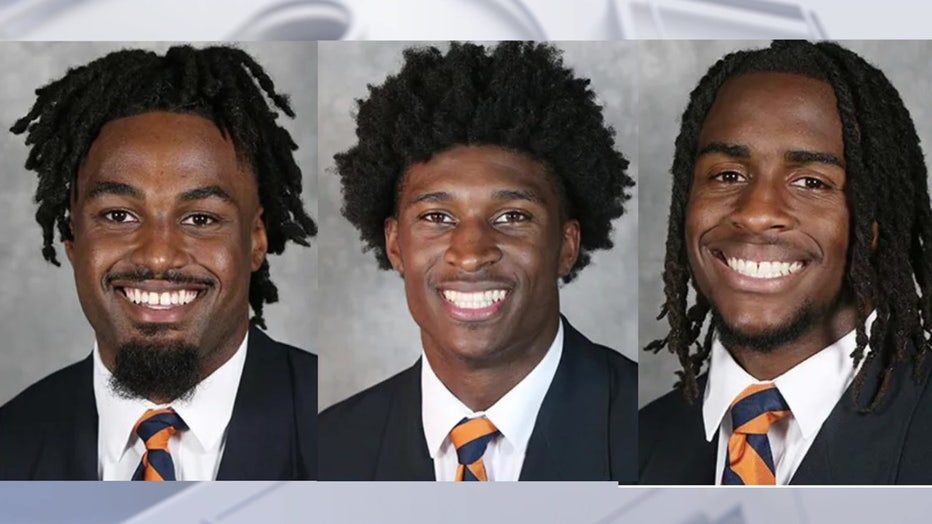 A memorial outside Scott Stadium on campus continues to grow as mourners leaves flowers, stuffed animals, and notes to the three killed. Vigils have taken place each day since the shooting happened.

University of Virginia President Jim Ryan canceled classes Monday and Tuesday to give students time to mourn, reflect, and gather together. Classes resumed Wednesday on a normal schedule. Officials say undergraduate students will not be required to complete assignments or take exams before the Thanksgiving break. Faculty has been asked to be as flexible as possible with classes, attendance and coursework.

The University of Virginia athletics department also announced that the football game against Coast Carolina, scheduled for Saturday, has been canceled.

A community-wide vigil is being planned, and details are expected in the coming days.

Virginia Gov. Glenn Youngkin ordered flags over the state capital and at local, state and federal buildings to be flown at half-staff Tuesday in memory of the victims.

FOXNews contributed to this report.