The Supreme Court's conservative majority is allowing evictions to resume across the United States, blocking the Biden administration from enforcing a temporary ban that was put in place because of the coronavirus pandemic.

WASHINGTON - The Biden administration is trying to prevent evictions from public housing for nonpayment of rent, seeking to shore up protections following the end of the nationwide eviction moratorium.

Under a new rule from the Department of Housing and Urban Development, tenants in HUD-subsidized public housing cannot be evicted for nonpayment without providing them 30 days' notice and information about available federal emergency rental assistance. The rule is scheduled to be published Thursday in the Federal Register.

Technically, the rule would go into effect 30 days after publication, but a senior HUD official told The Associated Press that public housing authorities across the country were expected to comply immediately. The official, who was not authorized to comment publicly and spoke on the condition of anonymity, said the rule change was due to significant concern about a looming wave of evictions as cases begin to work their way through courts.

RELATED: End of eviction moratorium could bring problems for those behind on rent, but help is available

In an official statement set for release Wednesday, HUD Secretary Marcia Fudge called the change "a significant step in raising tenant awareness about the availability of funds that can assist them with past due rent and allowing them additional time to access relief that may stave off eviction entirely." 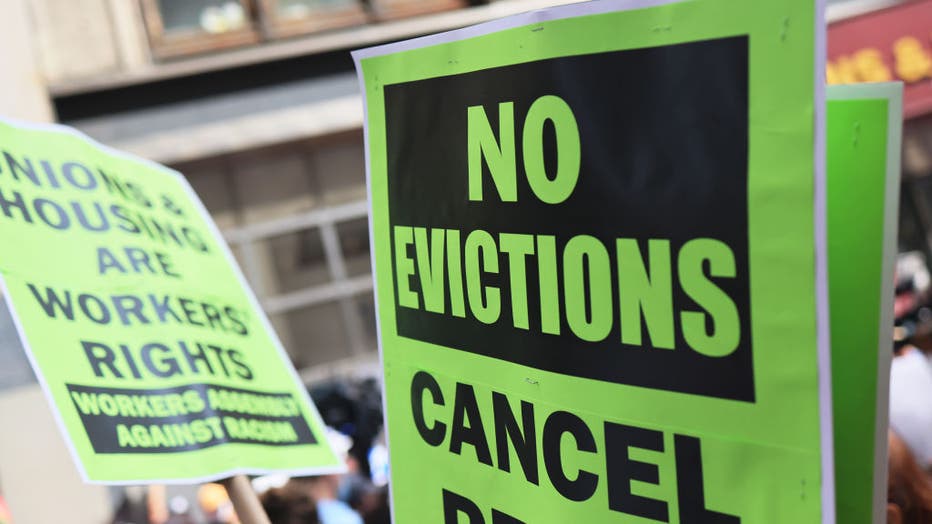 FILE - People hold up signs as they gather outside of a New York City Marshall's office calling for a stop to evictions on Aug. 31, 2021, in New York City. (Photo by Michael M. Santiago/Getty Images)

Elements of the new rule are not new. The 30-day notice requirement is part of the original COVID-19 relief package. But the change will be coupled with specific guidance for housing authorities on how to steer tenants toward the billions of dollars in available emergency rental assistance. It's also designed to buy some extra time for those funds to work their way through the system.

Besides public housing residents, the rule change will apply to those living in project-based rental assistance properties — a program whereby private for-profit or nonprofit property owners enter into a contract with HUD to provide affordable housings units. All told, HUD estimates that the change will cover 4.1 million people.

RELATED: Most rental assistance has still not gone out, feds report

Biden administration officials have complained in the past that the rental relief funds are bottlenecked by bureaucracy at the state and local level. The senior HUD official said the funds' dispersal has been proceeding a little slower than officials had hoped.

The federal moratorium, a response to the coronavirus pandemic, expired in late August, and Congress did not extend it. While the federal government now focuses on pumping money into rental assistance programs, the nationwide moratorium has devolved into a patchwork of localized bans, in places like Washington state, Boston and New York state — all expiring on different schedules.

The senior HUD official said one of the primary goals of the change is to bring all jurisdictions under the same banner.