WASHINGTON - A geophysicist accused of violently beating police officers at the U.S. Capitol during a pro-Trump riot on Jan. 6, 2021 will be jailed before trial after he attempted to flee the country to Switzerland, a federal judge ruled.

According to court documents released Wednesday, Jeffrey Sabol allegedly "forcibly resisted, opposed, impeded, intimidated, or interfered with Metropolitan Police Department (MPD) officers while they were attempting to help the U.S. Capitol Police maintain the security of the U.S. Capitol on January 6, 2021."

"He stripped a vulnerable police officer of his police baton," Judge Emmet Sullivan wrote. "He then used that stolen police baton to force another officer away from his post and into a mob of rioters who proceeded to viciously attack him, leaving him bleeding from the head."

In the 64-page ruling, Sabol allegedly planned to travel from Boston to Switzerland to avoid extradition for any crimes arising from his conduct at the U.S. Capitol on Jan. 6.

"He has admitted to law enforcement that he planned to ski while in Switzerland to make his trip ‘look natural,’" according to court filings.

But while at the airport in Boston, Sabol allegedly saw police officers and altered his plans. He left the airport, rented a vehicle and began driving south.

"Because Mr. Sabol thought law enforcement was tracking him, he discarded his cell phone out of a window and over a bridge while he was driving," the report said. 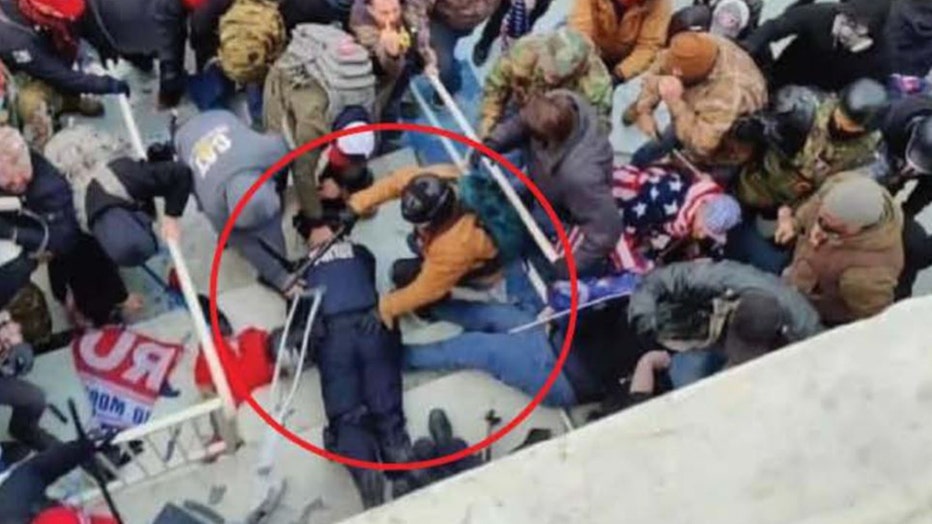 In the 64-page ruling, Jeffrey Sabol allegedly planned to travel from Boston to Switzerland to avoid extradition for any crimes arising from his conduct at the U.S. Capitol on Jan. 6. (Department of Justice)

According to court documents, when officers found Sabol in New York, he was covered in blood from severe lacerations on his thighs and arms. Sabol allegedly said, "I was fighting tyranny in the D.C. Capitol" and "I am wanted by the FBI." He also admitted to law enforcement that he had attempted to take his own life.

Sullivan said that Sabol would remain in jail prior to trial, due to his '"clear disregard for the law" and belief that he is "flighting tyranny," which Sullivan said indicates "that he poses a danger to the community" if let out of jail.

RELATED: Ex-girlfriend of accused Capitol rioter turned him in after he called her a ‘moron’ via text

Sabol was taken into custody in mid-January. He was indicted alongside four other individuals who allegedly assaulted police officers.

Sabol’s lawyers argued that his release from jail would improve his mental state.

"While the Court appreciates that living in New York with his girlfriend and near his family may provide him the type of support and oversight needed to improve his mental health conditions, the Court is not persuaded that this proposed home confinement plan would mitigate his continued danger to the community based on his demonstrated willingness to engage in violence in furtherance of his beliefs and in a perceived battle against tyranny," Sullivan wrote.

The FBI is still seeking many rioters nearly three months after violent extremists breached the U.S. Capitol and committed a litany of federal criminal acts.

"With the assistance of hundreds of thousands of tips from the American people, the FBI has arrested more than 300 individuals who took part in the Capitol riots. Of those, more than 65 were arrested for assaulting law enforcement officers," the FBI wrote in a press release in March.