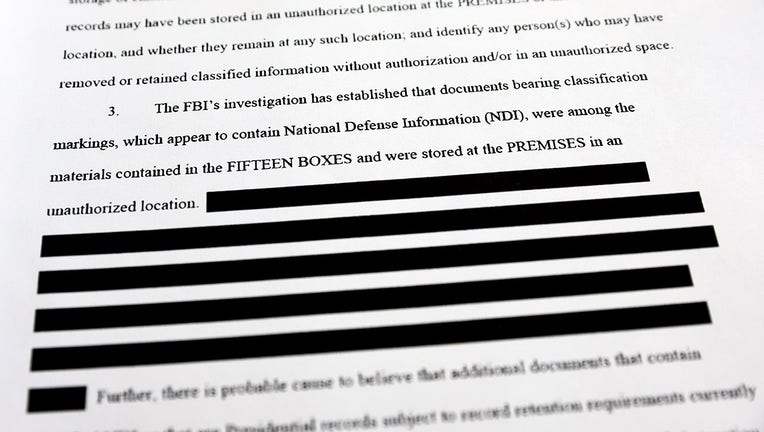 In this photo illustration, a page is viewed from the government’s released version of the F.B.I. search warrant affidavit for former President Donald Trump's Mar-a-Lago estate on August 27, 2022 in California. (Photo Illustration by Mario Tama/Getty

WASHINGTON - The Justice Department said Thursday that it was appealing a judge's decision granting the appointment of an independent arbiter to review records seized by the FBI from former President Donald Trump's Florida home.

The department also asked U.S. District Judge Aileen Cannon to put on hold her directive prohibiting it from using the seized records for investigative purposes while it contests her ruling to a federal appeals court.

Law enforcement officials said they would suffer "irreparable harm" if Cannon's directive remained in place, noting that uncertainty about the boundaries of the judge's order had led the intelligence community to temporarily halt a damage assessment of the classified records taken from Mar-a-Lago.

"Moreover, the government and the public are irreparably injured when a criminal investigation of matters involving risks to national security is enjoined," the Justice Department motion stated.

U.S. District Judge Aileen Cannon on Monday granted the Trump team's request for a so-called special master and temporarily blocked the Justice Department from using for investigative purposes the thousands of records taken from Mar-a-Lago during the Aug. 8 search.

That order has the likely impact of slowing the pace of the investigation into the presence of classified documents at the Florida property.

The Justice Department, which had strenuously opposed such an appointment, filed a notice of appeal Thursday, saying it was contesting the ruling to the Atlanta-based 11th U.S. Circuit Court of Appeals.

Cannon, a Trump appointee, said the yet-to-be-named special master will be responsible for reviewing the records from Mar-a-Lago and segregating out those that are potentially protected by attorney-client privilege or executive privilege.

The Justice Department has been investigating what it says was the unlawful retention of national defense information at Mar-a-Lago as well as efforts to obstruct the probe. It is not clear whether Trump or anyone else will face charges.

The two sides were directed to submit proposed names of a special master by Friday. That role is often filled by a lawyer or former judge.