Airmen from the 58th and 66th Rescue Squadrons and 855th Aircraft Maintenance Squadron were welcomed home at Nellis Air Force Base in Nevada on Sept. 7, 2021.

LAS VEGAS - Members of the U.S. Air Force were greeted as they returned home to Nevada this week after assisting with the massive evacuation effort of Afghan nationals and their families amid the U.S. withdrawal from Afghanistan and the Taliban’s takeover.

Airmen from the 58th and 66th Rescue Squadrons and 855th Aircraft Maintenance Squadron returned from their deployment on Sept. 7 to Nellis Air Force Base in southern Nevada, officials said. They had been located in the Middle East as part of Operation Allies Refuge, which aimed to airlift certain at-risk Afghan civilians, their families and others eligible for U.S. Special Immigrant Visas (SIV).

Nellis Air Force Base welcomed the airmen home in a post on Twitter, writing in part: "We're glad to have you home. Thank you for your #service!"

U.S. and NATO forces officially left Afghanistan at the end of August in a fraught end to America’s two-decade war. The final days of the American airlift evacuated over 100,000 people amid the Taliban’s swift takeover of the country. But the effort also was accompanied by scenes of chaos with many desperate to flee — including Afghans plunging to their deaths from the sides of military aircraft on takeoff. 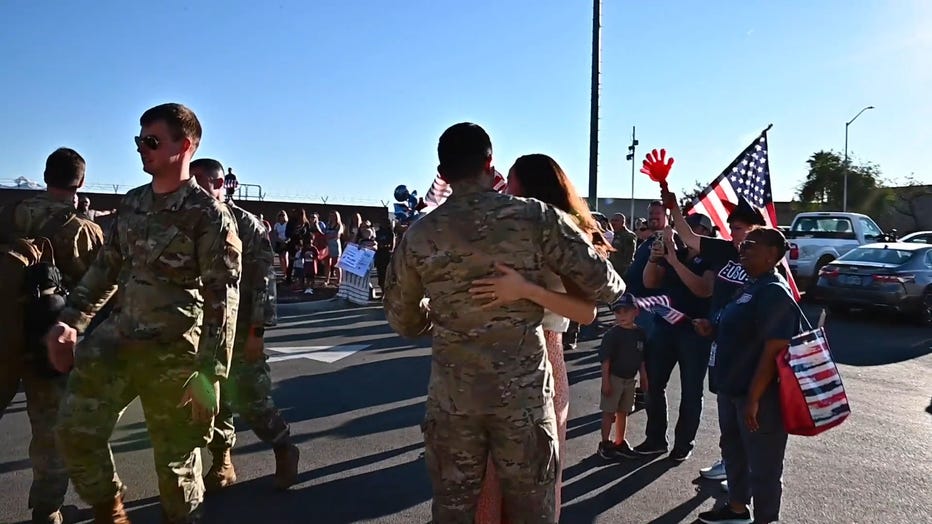 Airmen from the 58th and 66th Rescue Squadrons and 855th Aircraft Maintenance Squadron were welcomed home at Nellis Air Force Base in Nevada on Sept. 7, 2021. (Credit: Tech. Sgt. Alexandre Montes via Storyful)

Other service members were welcomed back to the U.S. this week, including soldiers who helped during evacuations in Kabul and returned home on Monday to Fort Drum, New York. Video shared of the ceremony showed the "Polar Bears" of the 4th Battalion, 31st Infantry, filing into a building as friends and family applauded and cheered.

The commander of the 10th Mountain Division, Maj. Gen. Milford H. Beagle commended the soldiers’ leadership and thanked them for their service in Afghanistan.

"Thank you for doing your duty, which your nation asked you to do. Thank you all for making every single one of us proud of every one of you standing in this formation," he said.

Meanwhile, some 200 foreigners, including Americans, left Afghanistan on a commercial flight out of Kabul on Thursday, the first such large-scale departure since the frantic Aug. 31 withdrawal.

RELATED: ‘They’re home now’: Soldiers welcomed back to US from Afghanistan with cheers, applause