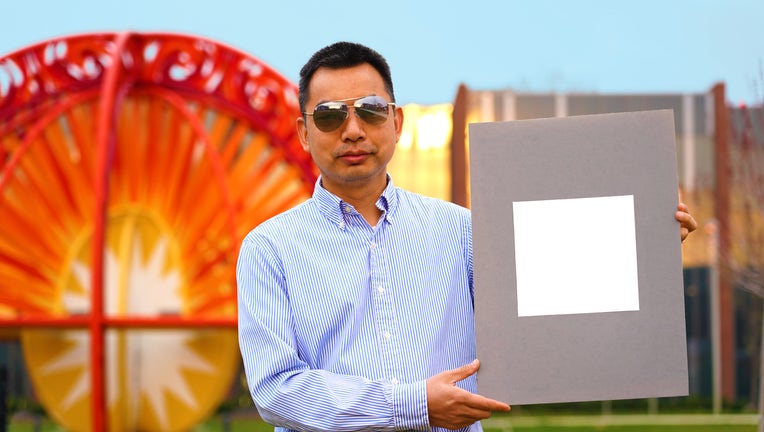 WEST LAFAYETTE, Ind. - Engineers at Purdue University say they have created the whitest paint yet, and it could reduce the need for air conditioning and curb global warming.

"If you were to use this paint to cover a roof area of about 1,000 square feet, we estimate that you could get a cooling power of 10 kilowatts," Professor Xiulin Ruan said in a news release. "That’s more powerful than the central air conditioners used by most houses."

According to researchers, the new paint reflects up to 98.1% of sunlight and sends infrared heat away from a surface at the same time.

They say typical commercial white paint gets warmer rather than cooler and can only reflect about 80-90% of sunlight.

What makes the whitest paint so white is the high concentration of a chemical compound called barium sulfate, which is also used to make photo paper and cosmetics white, according to researchers.

The second explanation is that the barium sulfate particles are all different sizes in the paint—which can scatter more light depending on its size. This allows for a wider range of particle sizes which allows the paint to scatter more of the sunlight.

President Biden and Sectary of State Antony Blinken host an energy and climate forum. The U.S. is asking other countries to slash by at least 30% in the next decade. LiveNOW from FOX | Raw & unfiltered news

"A high concentration of particles that are also different sizes gives the paint the broadest spectral scattering, which contributes to the highest reflectance," student Joseph Peoples said.

Researchers also demonstrated outdoors that the paint can keep surfaces 19 degrees cooler than their natural surroundings at night. It can also cool surfaces 8 degrees below their surroundings under strong sunlight during noon hours.

A patent application is currently pending through the Purdue Research Foundation Office of Technology Commercialization.

By eliminating the need for air conditions, researchers hope this could combat global warming, a crisis President Joe Biden has repeatedly highlighted.

Biden highlighted the need to do more about climate change after touring storm damage in New York and New Jersey Tuesday from Hurricane Ida earlier this month.

"Folks, we got to listen to the scientists and the economists and the national security experts, they all tell us this is ‘code red,’ the nation and the world are in peril," Biden said during a news conference in Queens, New York. "That’s not hyperbole. That is a fact."

Biden’s aim to fight climate change is part of his larger infrastructure plan known as the "Build Back Better" agenda, which also calls for more jobs, easier access to health care and tax cuts.