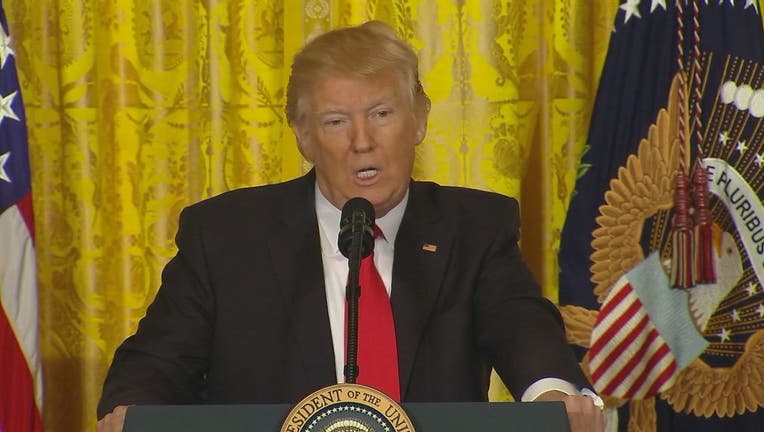 WASHINGTON (AP) -- Aggrieved and spoiling for a fight, Donald Trump used a marathon encounter with reporters Thursday to denounce the "criminal" leaks that took down his top national security adviser and revived questions about his own ties to Russia. But he offered only a lawyerly denial that his campaign aides had been in touch with Russian officials before last fall's election.

"Nobody that I know" he said in the first full-length news conference of his presidency.

The 77-minute event amounted to a free-wheeling airing of complaints, with the new president attempting to find his footing after the rockiest launch in recent memory. Trump slammed a "bad court" of appeals judges for blocking his refugee and immigration executive order and denied that his White House was paralyzed by chaos and infighting among top advisers.

"This administration is running like a fine-tuned machine," he boasted.

With his signature hyperbole betrayed by reality, Trump said there has never been a president "who in this short period of time has done what we've done." He blamed any problems on the outgoing Obama administration -- "I inherited a mess at home and abroad" -- and the news media.

Standing in the stately, chandeliered East Room, Trump lambasted the "out of control" media -- long his favorite foe. He appeared to delight in jousting with reporters, repeatedly interrupting their questions and singling out stories he disagreed with, well aware his attacks were sure to be cheered by loyal supporters who share his views.

Polls show Trump retains support among Republicans, and solid majorities of Americans say he is following through on his promises and is viewed as a strong leader, according to a Gallup survey. But on other questions Americans express deep reservations. Majorities say he doesn't inspire confidence and is not honest and trustworthy.

Trump's job approval rating is much lower than those of past presidents at the same point in their administrations. According to a Pew Research Center survey, 39 percent of Americans approve of his job performance while 56 percent disapprove.

Trump's first month in office has been chaotic by any measure -- a flurry of self-inflicted wounds and poorly executed policy. On Monday, he demanded the resignation of his national security adviser Michael Flynn following revelations that Flynn misled Vice President Mike Pence about his contacts with Russia. The next day, The New York Times reported that multiple Trump advisers were in touch with Russian intelligence advisers during the election campaign.

Trump panned the report as "fake news" and said he had "nothing to do with Russia."

"To the best of my knowledge no person that I deal with does," he added.

That answer, couched with a caveat similar to one routinely used by witnesses on a trial stand, appeared to give him wiggle room.

The president more clearly defended Flynn's calls with Russia's ambassador to the U.S. during the transition period after his November victory. He said that while he did not tell his adviser to discuss sanctions with the envoy, "I would have directed him if he didn't do it."

The president said that while Flynn was "just doing his job," he was "not happy" that the adviser had misled the vice president. Trump knew for some time that Flynn had given Pence an inaccurate accounting of his discussions with Russia, but the president did not tell his No. 2 for about two weeks, according to a timeline supplied by the White House.

The president has yet to announce Flynn's replacement. His top choice, Vice Admiral Robert Harward, turned down the job Thursday, largely because of family concerns, according to a White House official who would not be named because Harward's decision has not been publicly announced.

Trump repeatedly tried to steer questions away from his and his advisers' potential ties with Russia, saying attention should rather be focused on why a steady stream of classified information is making its way into news reports.

He took a friendly posture toward Russia during the campaign and has spoken favorably about Russian President Vladimir Putin. He's yet to fully define what a better relationship between Washington and Moscow would look like, though he has said he wants to increase cooperation with Russia in the fight against the Islamic State.

On Thursday, he seemed to lower expectations for the success, pre-emptively blaming media reports for hurting his chances of making good on campaign promises to build a better relationship.

"If you were Putin right now, you would say, 'Hey, we're back to the old games with the United States, there's no way Trump can ever do a deal with us,'" he said.

Trump vowed to move forward next week on his stalled plans to enact "extreme vetting" measures for people coming to the United States. He said he would sign a "new and very comprehensive order" aimed at addressing legal issues in his initial directive, which had temporarily halted the entire U.S. refugee program and all entries from seven Muslim-majority nations while the government worked on new vetting procedures.

A federal appeals court rejected the measure, and Trump said his administration would be "appealing." Shortly after, the Justice Department announced it did not want a larger appellate panel to review the ruling and would instead replace the ban.

The president took questions Thursday from 17 reporters, far more than at most presidential news conferences. His answers were often unwieldy, almost stream of consciousness, and some of his responses were startlingly strange.

He said the "greatest thing" he could do was "shoot" a Russian spy ship lingering off the East Coast of the United States. He asked an African-American reporter whether she could help set up a meeting with the Congressional Black Caucus. He wrongly stated that his Electoral College victory had been the largest of any president since Ronald Reagan, then dismissed the inaccuracy, saying he'd been "given that information."

But the former reality TV star often appeared to be in his element. He jousted with reporters, particularly those he knows by name from his constant consumption of television news. He jokingly told CNN's Jim Acosta that he had checked whether he was related to Alexander Acosta, the dean of the Florida International University law school who is his new pick to lead the Labor Department.

Acosta's nomination was ostensibly the purpose of the news conference, though Trump dispensed with the announcement in a few brief sentences. The president's original choice to head the agency, Andy Puzder, withdrew his nomination on Wednesday, another blow to the new administration.