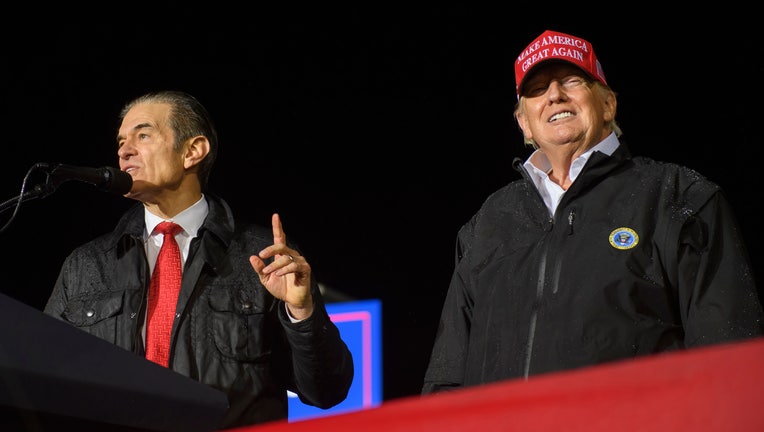 Pennsylvania Republican U.S. Senate candidate Dr. Mehmet Oz joins former President Donald Trump onstage during a rally in support of his campaign at the Westmoreland County Fairgrounds on May 6, 2022 in Greensburg, Pennsylvania. (Photo by Jeff Swense

WILKES-BARRE, Penn. - Larry Mitko voted for Donald Trump in 2016. But the Republican from Beaver County in western Pennsylvania says he has no plans to back his party's nominee for Senate, Dr. Mehmet Oz — "no way, no how."

Mitko doesn’t feel like he knows the celebrity heart surgeon, who only narrowly won his May primary with Trump's backing. Instead, Mitko plans to vote for Oz's Democratic rival, Lt. Gov. John Fetterman, a name he's been familiar with since Fetterman’s days as mayor of nearby Braddock.

Mitko's thinking underscores the political challenges facing Trump and the rest of the Republican Party as the former president was shifting to general election mode with a rally Saturday night in Wilkes-Barre, Pennsylvania, the first of the fall campaign.

While Trump's endorsed picks won many Republican primaries this summer, many of the candidates he backed were inexperienced and polarizing figures now struggling in their November races. That's putting Senate control — once assumed to be a lock for Republicans — on the line.

Among those candidates are Oz in Pennsylvania, author JD Vance in Ohio, venture capitalist Blake Masters in Arizona and former football star Herschel Walker in Georgia. 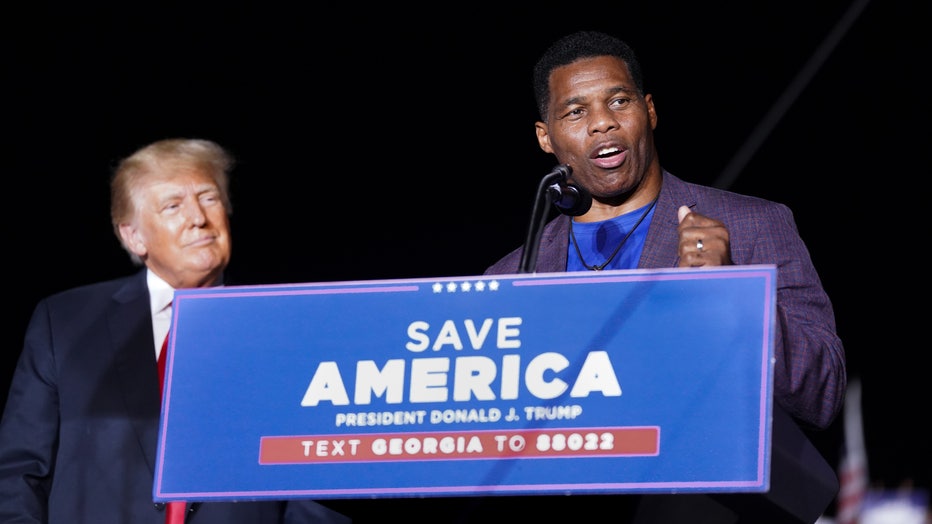 "Republicans have now nominated a number of candidates who've never run for office before for very high-profile Senate races," said veteran Republican pollster Whit Ayres. While he isn't writing his party's chances off just yet, he said, "It’s a much more difficult endeavor than a candidate who had won several difficult political races before."

The stakes are particularly high for Trump as he lays the groundwork for an expected 2024 presidential run amid a series of escalating legal challenges, including the FBI's recent seizure of classified documents from his Florida home. Investigators also continue to probe his efforts to overturn the results of the 2020 election.

An image provided by the Department of Justice shows partially redacted documents with classified markings, including colored cover sheets indicating their status, that FBI agents reported finding at Trump's office in Mar-a-Lago.

This past week, President Joe Biden gave a prime-time speech in Philadelphia warning that Trump and other "MAGA" Republicans — the acronym for Trump’s "Make America Great Again" campaign slogan — posed a threat to U.S. democracy. Biden has tried to frame the upcoming vote, as he did the 2020 election, as a battle for the "soul of the nation." Biden's Labor Day visit to Pittsburgh will be his third to the state within a week, a sign of Pennsylvania’s election-year importance.

While Republicans were once seen as having a good chance of gaining control of both chambers of Congress in November amid soaring inflation, high gas prices and Biden's slumping approval ratings, Republicans have found themselves on defense since the Supreme Court overturned the landmark Roe v. Wade decision protecting abortion rights.

Some candidates, like Doug Mastriano, the GOP's hard-line nominee for governor in Pennsylvania, are sticking with their primary campaign playbooks, hoping they can win by turning out Trump's loyal base even if they alienate more moderate voters.

Mastriano, who wants to outlaw abortion even when pregnancies are the result of rape or incest or endanger the life of the mother, played a leading role in Trump's effort to overturn the 2020 election and was seen outside the U.S. Capitol on Jan. 6, 2021, as pro-Trump rioters stormed the building. 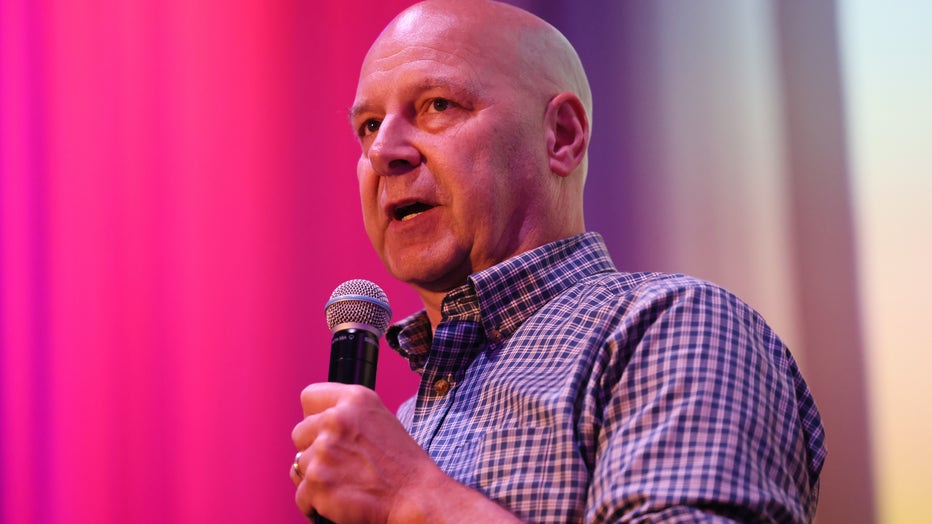 Pennsylvania Republican gubernatorial candidate Doug Mastriano speaks during a campaign rally at The Fuge on May 14, 2022 in Warminster, Pennsylvania. (Photo by Michael M. Santiago/Getty Images)

But others have been trying to broaden their appeal, scrubbing from their websites references to anti-abortion messaging that is out of step with the political mainstream. Masters, for instance, removed language from a policy section of his website that labeled him "100% pro-life," as well as language saying, "if we had had a free and fair election, President Trump would be sitting in the Oval Office today." Others have played down Trump endorsements that were once featured prominently.

The shifting climate has prompted rounds of finger-pointing in the party, including from Senate Minority Leader Mitch McConnell of Kentucky, who last month cited "candidate quality" as he lowered expectations that Republicans would recapture control of the Senate in November.

Florida Sen. Rick Scott, who leads the National Republican Senatorial Committee, said those who complain about the party's nominees have "contempt" for the voters who chose them.

"It’s an amazing act of cowardice, and ultimately, it’s treasonous to the conservative cause," he wrote in an op-ed in the Washington Examiner.

Trump, too, fired back, calling McConnell a "disgrace" as he defended the party's candidate roster.

"There's some very good people," he said in a radio interview. "You know, takes a lot of courage to run and they spend their wealth on it and they put their reputations on the line."

Democrats have also piled on.

"Senate campaigns are candidate versus candidate battles and Republicans have put forward a roster of deeply flawed recruits," said David Bergstein, the Senate Democratic campaign committee's communication director. He credited Trump with deterring experienced Republicans from running, elevating flawed candidates and forcing them to take positions that are out of step with the general electorate.

"All those factors have contributed to the weakness of the slate of Republican candidates they’ve been left with," he said. A Trump spokesman did not respond to requests for comment.

In Pennsylvania, Republicans are hoping Oz's shortcomings as a candidate will be overshadowed by concerns about Fetterman, who suffered a stroke just days before the primary and has been sidelined for much of the summer. He continues to keep a light public schedule and visibly struggled to speak at a recent event.

Republicans acknowledge that Oz struggles to come off as authentic and was slow to punch back as Fetterman spent the summer trolling him on social media and portraying him as an out-of-touch carpetbagger from New Jersey.

While Fetterman, whom Republicans deride as "Bernie Sanders in gym shorts," leads Oz in polls and fundraising, Republicans say they expect the money gap to narrow and are pleased to see Oz within striking distance after getting hammered by $20 million in negative advertising during the primaries.

The National Republican Senatorial Committee is helping finance a new round of Oz’s television ads, and the Senate Leadership Fund, a McConnell-aligned super political action committee, says it added $9.5 million to its TV buy — boosting its overall commitment to $34.1 million by Election Day.

"Regardless of what people may have heard in the primary, they’re going to realize that Oz is the best choice for Pennsylvania," said Pennsylvania Republican National Committeeman Andy Reilly.

A super PAC aligned with Senate Majority Leader Chuck Schumer, D-N.Y., says it has made $32 million in television ad reservations in the state.

Oz has won over some once-skeptical voters, like Glen Rubendall, who didn’t vote for the TV doctor in his seven-way primary — a victory so narrow it went to a statewide recount — but said he’s come around.

"I’ve been listening to him speak, and I have a pro-Oz view now," said Rubendall, a retired state corrections officer.

Traci Martin, a registered independent, also plans to vote for Oz because she opposes abortion, despite ads that aired during the primary featuring past Oz statements that seemed supportive of abortion rights.

"I hope he is (anti-abortion)," Martin said, "but the sad part is we live in an age when we see politicians say one thing and do another."