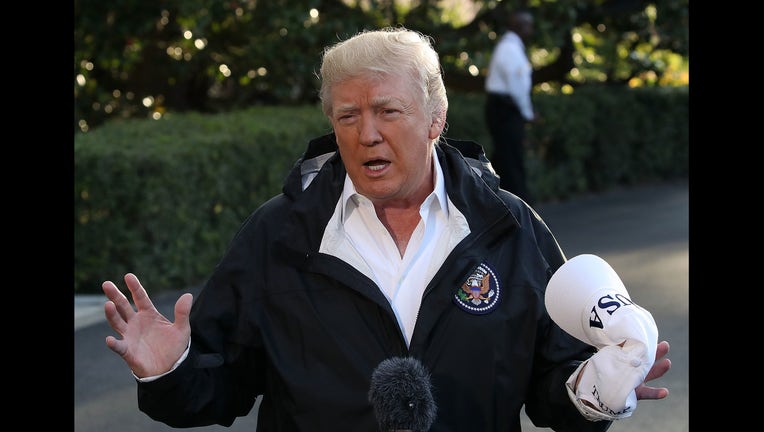 WASHINGTON (AP) - President Donald Trump on Tuesday called the gunman who killed 59 people and wounded hundreds others at a music festival in Las Vegas a "very, very sick individual."

Trump spoke to reporters as he departed for a trip to hurricane-ravaged Puerto Rico. He called the gunman "demented" and said "we're looking into him very seriously."

Trump has labeled the Sunday night shooting at an outdoor music festival an "act of pure evil" and declared the nation would unite behind the survivors.

His remarks from the White House on Monday were the prelude to a two-part test of whether Trump, a leader who excels at political provocation, can also deliver solace. Besides the Puerto Rico trip, Trump will travel to Las Vegas Wednesday to meet with families of the dead.

Trump spoke hours after a gunman on the 32nd floor of a Vegas Strip casino opened fire on people at an outdoor country music festival below. The gunman, 64-year-old Stephen Craig Paddock, killed himself in the hotel room before authorities arrived. It's not clear what motivated the shooting, although his actions suggest that he had planned the attacks for at least a period of days.

In a measured statement that was revised by aides until moments before he spoke, Trump praised the first responders who he said prevented further loss of life. He said he would visit Las Vegas on Wednesday. He offered condolences to the families of those killed, saying: "We cannot fathom their pain. We cannot imagine their loss."

Trump, who owns a hotel in Las Vegas, told associates that he feels deep ties to the city. He said in public that his visit would be "a very, very sad moment for me ... for everybody no matter where you are, no matter what your thought process."

The president has received periodic briefings on the shooting while also monitoring the coverage on cable news. On Twitter, Trump avoided the kind of inflammatory statements he has issued after some previous tragedies, instead offering "warmest condolences" to victims and their families.

Trump's visit to Las Vegas will come a day after he travels to hurricane-ravaged Puerto Rico, where many have accused the federal government of an inadequate response. Aides have worried about the response he will receive there, as Trump spent the weekend attacking the mayor of San Juan while consistently painting a rosier picture of the recovery effort than what has been described by those on the ground.

Like presidents before him, Trump marked the Las Vegas shootings by ordering the American flags at all public buildings across the nation flown at half-staff, and he observed a moment of silence on the White House lawn. Unlike his predecessor, Barack Obama, who responded to mass shootings by calling for stricter gun control measures, Trump made no mention of firearms restrictions.