Crews Work to Reunite Bags With Passengers Amid Flight Disruption

Winter weather and staffing shortages due to COVID have hit air travel this holiday season. A local reporter at Seattle-Tacoma International Airport showed one of the results – piles of bags waiting to be reunited with their owners. (Credit: @choeshow via Storyful)

A winter storm hitting the mid-Atlantic combined with pandemic-caused shortages of airline workers to push flight cancellations to a holiday-season high, creating more frustration for travelers just trying to get home.

More than 3,000 U.S. flights and about 4,700 worldwide were canceled by late afternoon Monday on the East Coast, according to tracking service FlightAware. Another 12,500 flights were delayed, including 5,600 in the U.S.

First, however, they had to contend with a winter storm that dumped several inches of snow on the District of Columbia, northern Virginia and central Maryland before quitting Monday afternoon.

The cancellations and delays just added to the despair felt over the weekend by holidays travelers trying to get home.

On social media, travelers complained about late cancellations, lost bags and long hold times to reach anybody in airline customer service. Some said they slept in airports and didn't know when they would get home. 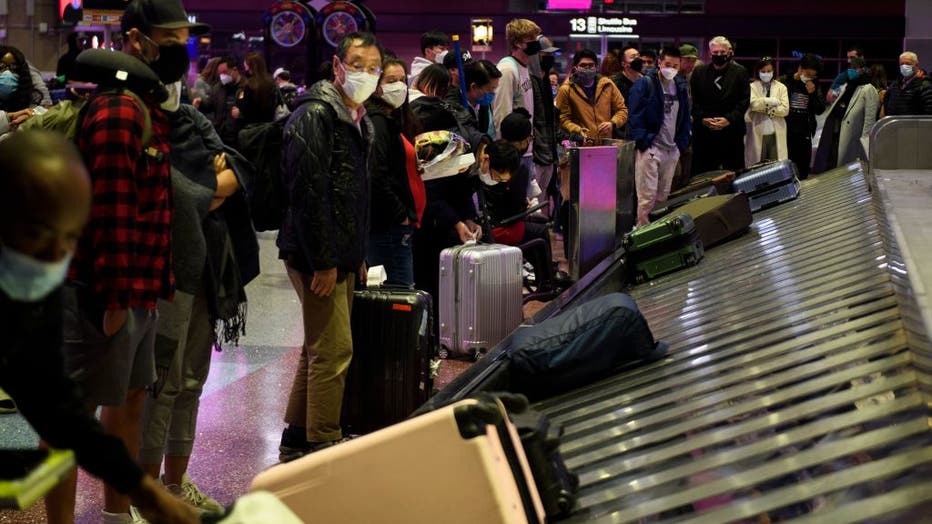 With the spread of the highly transmissible omicron variant, the seven-day rolling average for daily new cases of COVID-19 in the U.S. has tripled over the past two weeks and topped 400,000 on Sunday, according to figures from Johns Hopkins University.

The toll of grounded flights in the U.S. was in the few hundreds per day the week before Christmas, then soared past 1,000 a day, as airlines blamed crew shortages caused by the virus.

For several days, airlines and their passengers lucked out with mostly favorable weather, but a winter storm that hit the Midwest on Saturday caused cancellations to spike again to new highs.

Over the weekend, about 5,400 U.S. flights were canceled — nearly 12% of all scheduled flights — and more than 9,000 worldwide, according to FlightAware. By Monday afternoon, about 18,000 U.S. flights had been canceled since Christmas Eve.

Many of the cancellations were made hours or even a day in advance. Airline believe they have a better chance to keep lighter schedules on track, and it saves passengers from making needless trips to the airport.

More than three-quarters of Monday's scheduled flights at Ronald Reagan Washington National Airport and nearly half of those at nearby Baltimore/Washington International Thurgood Marshall Airport were scrubbed, according to FlightAware. Both airports received more than six inches of snow.

Southwest Airlines had canceled about 575 flights, or 15% of Monday's schedule, by midday. Spokesman Brad Hawkins said storms over the weekend and on Monday affected operations at some of its biggest airports, including Chicago, Denver and Baltimore, and left planes and crews out of position.

Delta Air Lines issued a travel waiver to let customers reschedule flights to and from Baltimore and Washington.

Snow falls at US Capitol as storm sweeps eastern US states

United Airlines said the nationwide COVID-19 spike caused by the omicron variant has affected its flight crews, resulting in canceled flights. Delta cited winter weather and omicron, but said it expected fewer than half as many cancellations Tuesday and Wednesday. American cited the storm in the Washington area, and said the number of employees calling in sick because of COVID-19 was similar to the past few days, although it declined to give figures.

SkyWest, a regional carrier that operates flights under the names American Eagle, Delta Connection and United Express, grounded more than 300 flights Monday after scrubbing 500 on Sunday.

Thousands of miles from the snow storms, Hawaiian Airlines said it had to cancel several flights between islands and across the Pacific due to staffing shortages.

Airlines are paying temporary bonuses to encourage pilots and flight attendants to pick up flights left empty by co-workers with COVID-19. United will pay pilots triple their usual wages for picking up open flights through most of January. Spirit Airlines reached a deal with the union to pay flight attendants double through Tuesday.