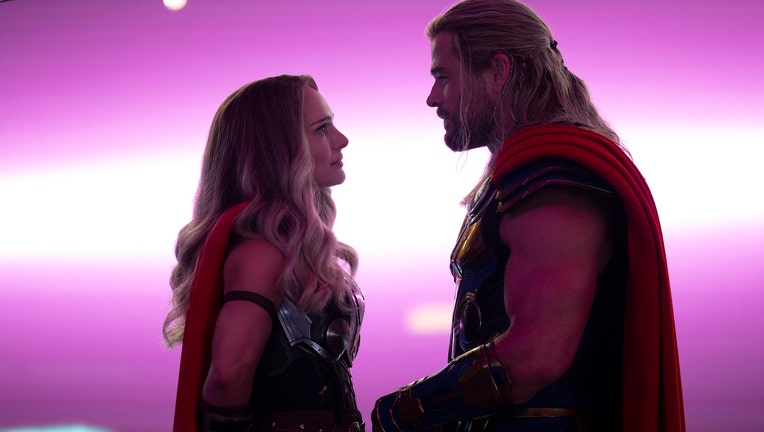 CHICAGO - No superhero has had a more winding path through the Marvel Cinematic Universe than Thor. Chris Hemsworth’s godly hero was introduced as a fish-out-of-water buffoon in his first movie, reconfigured as a more conventional romantic figure in "Thor: The Dark World," rebooted into a full-on comedian in Taika Waititi’s "Thor: Ragnarok" and then put through the wringer (and a fat suit) across "Avengers: Infinity War" and "Endgame." Without even entering the multiverse, we’ve managed to meet half a dozen iterations of the God of Thunder. And that’s left the famed Asgardian feeling a little unmoored, like a piece of clay to be shaped at will in each new installment.

The best thing about Waititi’s messy but emotionally ambitious "Ragnarok" follow-up "Thor: Love and Thunder" is that instead of adding yet another characterization to the mix, it tries to synthesize everything that’s come before it.

Rather than run from Thor’s convoluted past, "Love and Thunder" embraces it — literally bringing the character’s onscreen history back into the fold via Natalie Portman’s Jane Foster, the love interest who all but disappeared since 2013. Though "Love and Thunder" has the same signature absurdist humor Waititi brought to "Ragnarok," it’s also a surprisingly bittersweet story about missed time and lost loves.

If "Ragnarok" was a no-holds-barred explosion of comedic energy, "Love and Thunder" is a veritable rollercoaster of tones and ideas — from the comedy of giant screaming goats to the righteousness of killing one’s god. And though it’s a tonal experiment that doesn’t entirely hang together, the unexpected dose of emotional maturity is a welcome way to bridge the gap between the old era of Thor and the new one.

About "Thor: Love and Thunder": A godly affair

Unfortunately, it takes a little while to get there. Though the first three phases of Marvel found great success in the "write yourself into a corner, then find a way out" mode of franchise storytelling, Phase Four is starting to show the limits of that approach. Much in the same way "Spider-Man: No Way Home" had to clumsily deal with Peter Parker’s identity reveal before getting into the multiverse-hopping story it actually wanted to tell, "Love and Thunder" opens with an awkward throat clear as it tries and fails to find something interesting to do with the fact that "Endgame" sent Thor off with the Guardians of the Galaxy (Chris Pratt, Karen Gillan, et al.).

WATCH FREE ON TUBI: Taika Waititi’s acclaimed comedy "Hunt for the Wilderpeople" — get the app 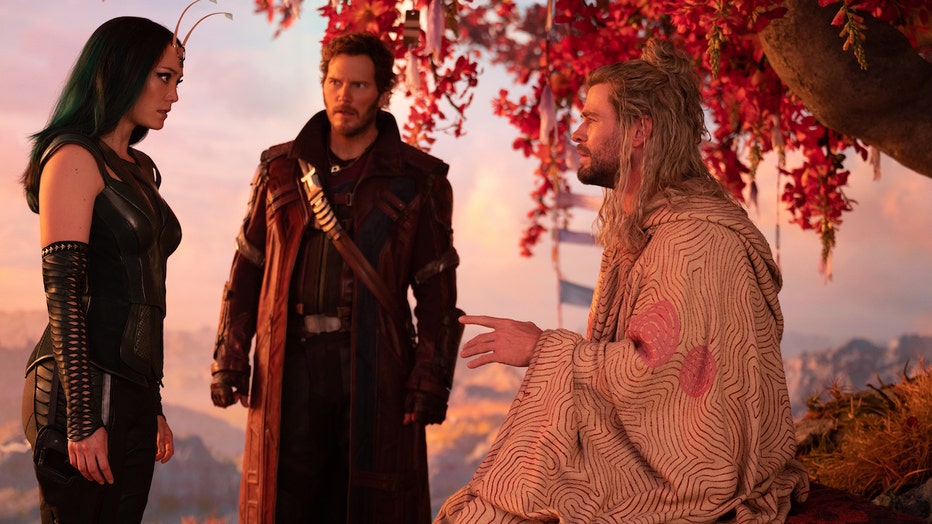 "Love and Thunder" doesn’t really get cooking until it zeroes in on the key (living) players in Thor’s life: His rock alien best buddy Korg (Waititi), his fellow Asgardian and current King Valkyrie (Tessa Thompson) and, yes, his old flame Jane, who — for reasons that have been kept from the movie’s marketing — has inherited his old hammer Mjölnir and been transformed into her own version of "the Mighty Thor," cape, biceps and all. (Jaimie Alexander’s Lady Sif is also on hand for a brief cameo, but sadly, and rather inexplicably, doesn’t get to be part of the main crew.)

RELATED: TV review: Get ready to fall in love with ‘Ms. Marvel’

The threat that brings them all together is Christian Bale’s Gorr the God Butcher, a sinister reptilian creature who’s easily the scariest villain the MCU has ever produced — and one whose origin story is key to the movie’s unexpectedly somber tone. After being forsaken by his own god, Gorr sets out on a general deity-killing mission. And when his vengeful reign of terror touches New Asgard, Thor and his friends must try to recruit some new allies and save the universe from Gorr’s godly assassinations. 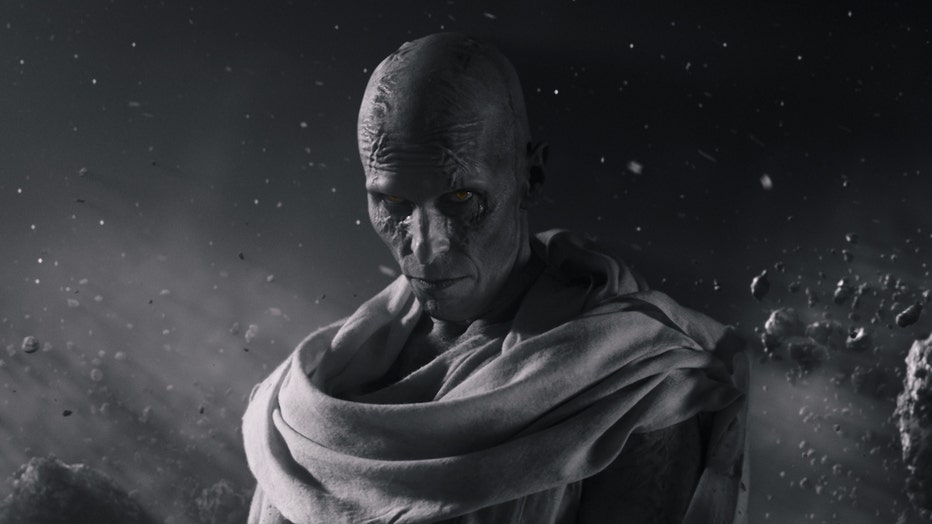 "Thor: Love and Thunder": A roadtrip romance with some surprisingly weighty themes

So, yes, there are some massive stakes at play (not to mention some delightfully wackadoo ideas about how gods spend their free time). But the most surprising thing about "Love and Thunder" is how much it operates as a small scale, introspective story about mid-life ennui. Though the film takes some cues from 1980s romances, it’s less "Romancing the Stone" than "Moonstruck" — or maybe even "Terms of Endearment." (It turns out there’s a tragic undercurrent to Jane’s badass superheroics.) One of the most memorable sequences is a simple montage that fills us in on the details of what Thor and Jane’s offscreen relationship actually looked like, along with the everyday human concerns that caused them to drift apart between movies.

Of course, there’s still fun to be had too. Though the humor is less consistent than in "Ragnarok," there’s a great running gag about Thor’s complicated relationship with his jealous axe Stormbreaker. Elsewhere, Russell Crowe gives the best Marvel comedic supporting turn since Ben Kingsley in "Iron Man 3" as he steps into the gilded breastplate of Zeus himself. But there’s a decidedly bittersweet undercurrent to it all too, like Thor’s funny/sad "Infinity War" monologue stretched into a two-hour movie.

While "Ragnarok" had its own weighty ideas about imperialism buried amidst its colorful chaos, "Love and Thunder" is a heavier film because its stakes are more personal, its tone more sincere. In fact, at its best, "Love and Thunder" is one of the most quietly philosophical entries in the MCU, as its characters grapple with the disappointment of meeting their godly heroes or question how to claim autonomy within the limitations of a mortal life.

RELATED: Marvel second installments ranked — including ‘Doctor Strange in the Multiverse of Madness’ 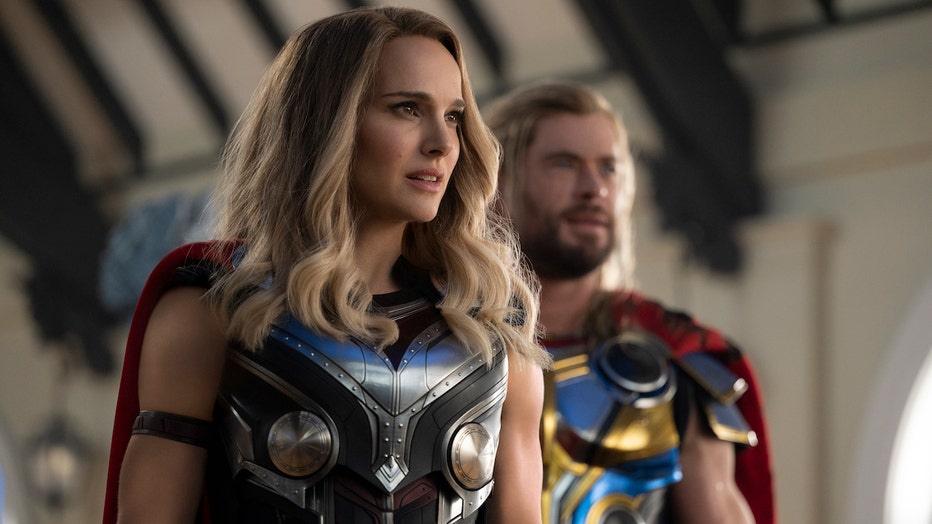 If only the movie could keep up that balance consistently. For as much as the more intimate approach is clearly an intentional storytelling choice, there are equally moments where it feels like a limitation of filming a blockbuster during a pandemic. The screenplay by Waititi and Jennifer Kaytin Robinson doesn’t have the necessary nuance to support a fully character-centric story. (Even with a limited cast, Valkyrie winds up getting lost in the shuffle.) And the movie struggles to pick a lane when it comes to how it wants to portray Jane in her Thor persona. The joke is that the godly powers turn the astrophysicist into a bit of an aggro lunkhead, but Portman mostly just winds up seeming lost amidst the beefy muscles and glossy airbrushing. (She’s better as the normal Jane we glimpse between Mighty transformations.)

The largely episodic plot also struggles to generate the right sense of tension and pacing for a superhero adventure. And even with a great black-and-white, 1950s creature feature-inspired battle sequence, "Love and Thunders" lacks the coherent aesthetic of "Ragnarok." There’s a patchwork, piecemeal quality to nearly every aspect of the film, from its inconsistent humor to its underdeveloped quest narrative.

Still, by its surprisingly moving third act, those flaws somehow seem to matter less. There’s something admirable — and maybe even a little punk rock — about the way Waititi sneaks so many big, thorny, humanistic ideas into a superhero movie that mostly sells itself as a 1980s-inspired, Guns N' Roses-scored romp. "Love and Thunder" isn’t the same kind of comedic crowdpleaser as "Ragnarok." But for those who wanted just a touch more heft back in the "Thor" franchise, it’s a worthy installment.

Make it a double feature with "Jupiter Ascending," streaming free on Tubi

Jupiter Ascending (2015): Like a lot of the Wachowskis’ post-"Matrix"output, "Jupiter Ascending" is the sort of gonzo swing that definitely isn’t for everyone. But once you embrace the unexpectedly earnest tone of this sci-fi fairy tale romance, it has plenty of rollicking action fun to offer. Rated PG-13. 127 minutes. Dir: The Wachowskis. Featuring: Mila Kunis, Channing Tatum, Sean Bean, Eddie Redmayne.

"Jupiter Ascending" is streaming free on Tubi — get the app

How to watch "Thor Love and Thunder"

"Thor Love and Thunder" will beam into theaters nationwide on July 8. It is not currently available to stream, although it will eventually make its way to Disney+ after its theatrical run.