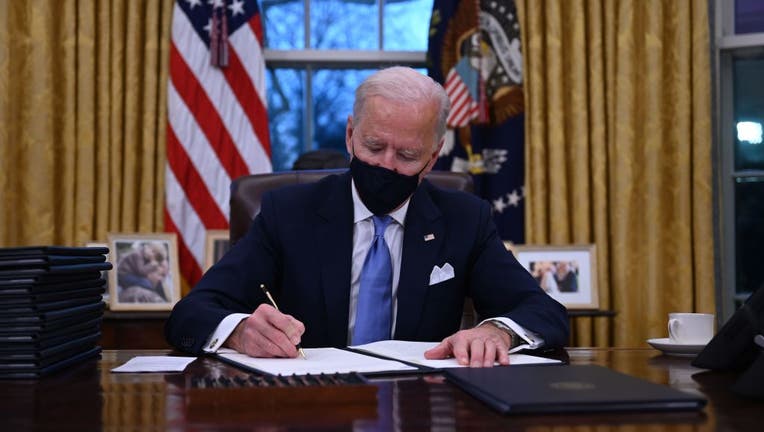 President Joe Biden sits in the Oval Office as he signs a series of orders at the White House in Washington, DC, after being sworn in at the US Capitol on January 20, 2021. (Photo by Jim WATSON / AFP) (Photo by JIM WATSON/AFP via Getty Images)

President Joe Biden on Monday said he was open to negotiating terms for a pending round of economic impact payments, which may indicate that fewer individuals would end up qualifying.

While discussing his broader ideas to stimulate the U.S. economy on Monday, the president said he was aware proposals may not pass exactly the way he laid them out in his $1.9 trillion relief package.

"For example, you know I proposed that we — because it was bipartisan, I thought it would increase the prospects of passage — the additional $1,400 in direct cash payment to folks," Biden said. "Well, there’s legitimate reason for people to say, ‘Do you have the lines drawn the exact right way? Should it go to anybody making over X-number of dollars or why?’  I’m open to negotiate those things."

STIMULUS CHECKS AND YOUR 2020 TAXES: ALL OF YOUR QUESTIONS, ANSWERED

Biden added that he picked the terms because he thought them to be "rational and reasonable," while adding it was still a "bit of a moving target."

In order for legislation containing the stimulus checks to clear the Senate, some Republicans would need to sign on.

But conservatives are wary of the package’s overall price tag. Sending cash to fewer people – or lowering check amounts – may help appease Republicans on the direct-payment front.

The $1,400 figure has also come under scrutiny from some progressives, who indicated that it was not enough.

Individuals earning up to $75,000, or $150,000 for married couples, were eligible for the second round of $600 direct payments. Households were also eligible for an additional $600 per qualifying child.

Beyond those income thresholds, the payments began to phase out at a rate of $5 per $100 of additional income.