WASHINGTON - Washington quarterback Taylor Heinicke had just been strip-sacked by Micah Parsons and stayed on the turf for an extra moment, kneeling and bowing his head, as Dorance Armstrong returned the fumble 37 yards for a touchdown. 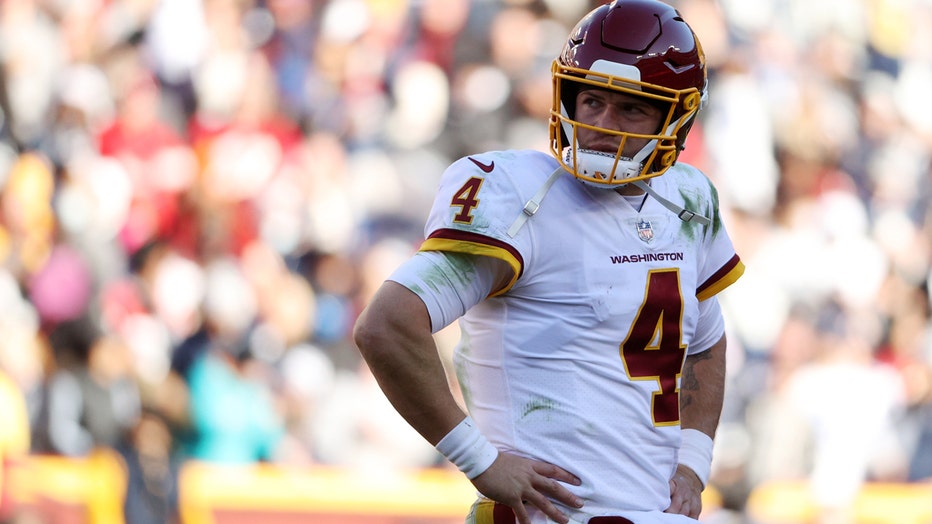 Taylor Heinicke #4 of the Washington Football Team reacts after throwing an interception against the Dallas Cowboys during the first quarter at FedExField on December 12, 2021 in Landover, Maryland. (Photo by Patrick Smith/Getty Images)

Hours later, Heinicke again was on the ground after another sack. This time, Heinicke left the game and did not return, sidelined by an injured left knee that he said afterward "should be fine."

After a month of competence and victories allowed Washington to suddenly — gasp! — matter, Heinicke and the rest of coach Ron Rivera’s club came back to earth, turning in an awful performance Sunday in a 27-20 loss to the NFC East rival Dallas Cowboys that was far more lopsided than a glance at the score might indicate.

"You’re not getting much going, and then when we do get some time, I’m trying to make the big plays I don’t need to make. The good thing I did in the last four games was taking what they gave me. ... Today there were a couple throws before half I shouldn’t have thrown and they were almost picked off," Heinicke acknowledged. "I have to be better."

"Probably the worst half of football we’ve played," Washington linebacker Cole Holcomb said "It wasn’t us."

Heinicke, who said his throwing elbow got "tweaked" when a defender grabbed it in the second quarter, went 11 for 25 for 122 yards. He had that first-half fumble on a fourth-and-2 play, and an interception that led to another score.

"A couple times, I thought he was a little hesitant. I thought he held the ball a little more than he should have," Rivera said. "Kind of pressed a little bit."

But Rivera also said about Heinicke: "If he's healthy, he's our starter."

Antonio Gibson lost a fumble and finished with only 36 yards on 10 carries as Dallas shut down a rushing attack that was the key to Washington's success of late.

There was more poor play and there were other injuries for Washington, which also faces divisional opponents in each of its final four games.

Receiver Terry McLaurin, the best offensive player on the roster, left in the third quarter because of a concussion after making zero catches. Center Tyler Larsen, a third-stringer pressed into starting duty, was carted off in the fourth quarter with a hurt Achilles tendon.

Washington (6-7) entered on a four-game winning streak that got it to .500, put a playoff berth within reach and allowed players and fans alike to dream of taking down division leader Dallas (9-4).

Instead, making good on coach Mike McCarthy’s boast of "We’re going to win this game," showing up with their own heated benches on a day with the temperature around 50 degrees, and with tens of thousands of their own supporters in the stands, the Cowboys dominated.

"There were a few more Dallas fans than I would have liked," Rivera said.

At halftime, the visitors held a 214-29 edge in total yards. Indeed, to that point, Washington had been penalized for more yards — 50 — than it accumulated on offense, while going 0 for 6 on third downs.

And Heinicke’s first-half numbers sure made him look more like a backup than someone who should be starting in the NFL: 2 for 12 for 19 yards, the pair of turnovers and a passer rating of 4.9.

He actually sat out one play in the half while getting checked in the sideline medical tent after one of Parsons’ two sacks. Kyle Allen came in and ran 11 yards, making this the fourth season in a row Washington has used at least three quarterbacks to take a snap. Allen later replaced Heinicke for mop-up time after the leg issue arose.

Washington finally put something on the scoreboard midway through the third quarter Sunday on Heinicke’s 43-yard TD pass to Cam Sims, followed by a run for a successful 2-point conversion that made it 24-8.

Far too little, far too late. Compounding things, Washington’s next drive ended after just two plays on Gibson’s sixth fumble of the season.

He didn’t touch the football the rest of the way; it was Jonathan Williams who scored a seemingly meaningless TD from 1 yard out with a little more than five minutes left. Two plays later, Dak Prescott was intercepted by Cole Holcomb, who brought it back 31 yards for a touchdown to make it 27-20.

But any thought of a wild comeback evaporated when Allen was strip-sacked by Randy Gregory. In all, Washington gave up four turnovers and five sacks.

"When the front seven keeps getting pressure on you and the secondary covers like they did today ... that’s a good defense," Heinicke said. "We just have to keep responding."