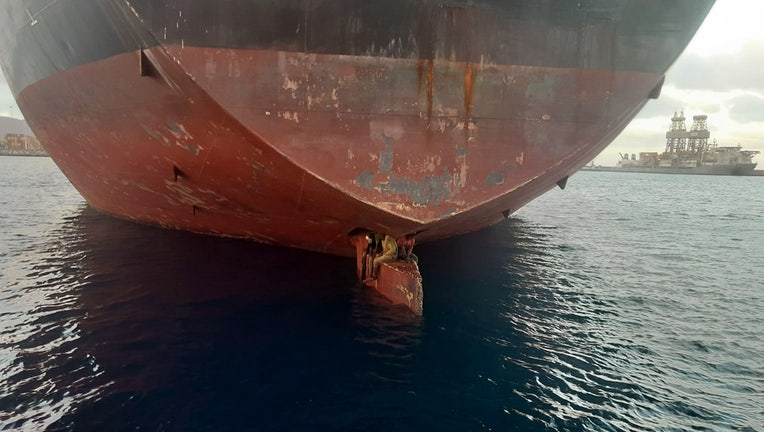 BARCELONA, Spain - Three stowaways were found on a ship's rudder in the Canary Islands after an 11-day ocean voyage from Nigeria, Spain’s maritime rescue service said.

The men found on the Alithini II oil tanker at the Las Palmas port on Monday afternoon appeared to have symptoms of dehydration and hypothermia and were transferred to hospitals on the island for medical attention, according to Spain's Maritime Safety and Rescue Society.

The survivors were all from Nigeria, the Spanish government’s delegation in the Canary Islands told The Associated Press. One of them remained hospitalized Tuesday.

The maritime rescue agency, known in Spain as Salvamento Marítimo, shared a photo of the three men sitting on top of the rudder under the ship's massive hull with their feet hanging only a few centimeters (inches) from the water.

According to the MarineTraffic tracking website, the Malta-flagged vessel left Lagos, Nigeria on Nov. 17 and arrived in Las Palmas on Monday. The distance between the ports is roughly 4,600 kilometers (2,800 miles).

Other people were previously discovered clinging to rudders while risking their lives to reach the Spanish islands located off northwest Africa. Salvamento Maritimo has dealt with six similar cases in the last two years, according to Sofía Hernández who heads the service’s coordination center in Las Palmas. 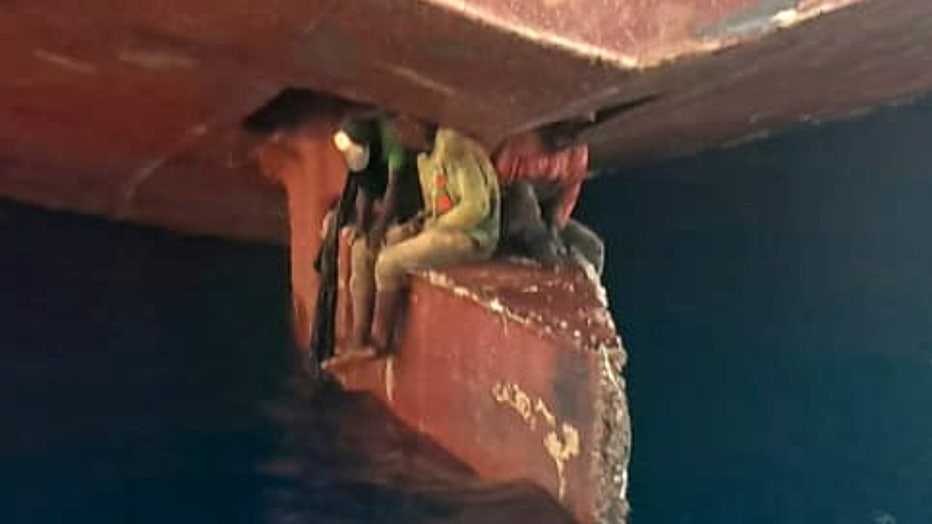 Migrants may seek cover inside the box-like structure around the rudder, Hernández explained, but are still vulnerable to bad weather and rough seas. "It is very dangerous," she told the AP.

A ship's fluctuating draft level - the vertical distance between the waterline and the bottom of the hull- is another hazard for such stowaways. The levels vary depending on the weight of the cargo onboard.

"We are talking about several meters difference. This part could have been perfectly submerged in the water," Hernández said.

In 2020 14-year-old Nigerian boy was interviewed by Spain’s El País newspaper after surviving two weeks on a ship’s rudder. He had also departed from Lagos.

"It's not the first time nor will it be the last," tweeted Txema Santana, a journalist and migration advisor to the regional government of the Canary Islands.

In cases like these, the ship owner is responsible for bringing the stowaways back to their point of departure, according to the Spanish government delegation in the islands.

Thousands of migrants and refugees from North and West Africa have reached the Canary Islands irregularly in recent years. Most make the dangerous Atlantic crossing on crowded boats after departing from the coast of Morocco, the Western Sahara, Mauritania and even Senegal.

More than 11,600 people have reached the Spanish islands by boat so far this year, according to figures released by Spain's Interior Ministry.