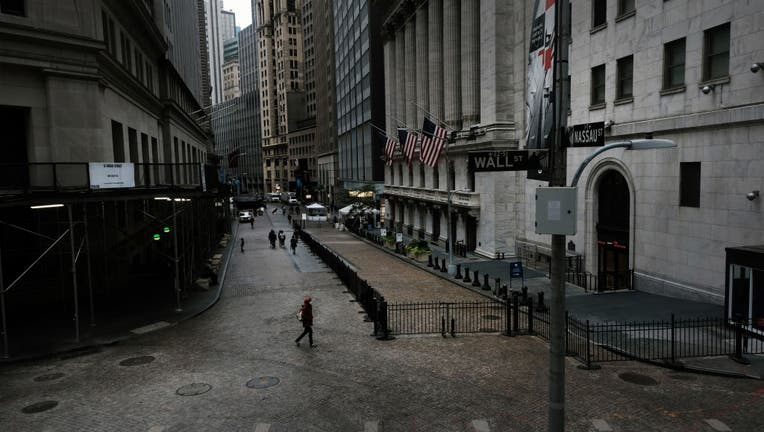 FILE - People walk by the New York Stock Exchange (NYSE) in lower Manhattan on October 02, 2020 in New York City as stocks and markets around the world have fallen in morning trading after investors digested the overnight news that President Donald T (Spencer Platt/Getty Images)

U.S. stocks fell sharply Monday as a troubling increase in coronavirus counts put investors in a selling mood. The skid came as doubts mount on Wall Street that Washington will come through with more stimulus for the economy before Election Day.

The S&P 500 slid 1.9%, its biggest single-day decline in more than a month. The Dow Jones Industrial Average dropped 650 points after having been down more than 960 during the heaviest selling. Technology companies drove much of the broad sell-off, though losses in communications services, financial and industrial stocks helped weigh down the market. Energy stocks also dropped in tandem with crude oil prices.

Stocks also fell across much of Europe and Asia. In another sign of caution, Treasury yields pulled back after touching their highest level since June last week.

“It’s kind of a perfect storm,” said Ross Mayfield, investment strategy analyst at Baird. “The record case numbers and the kind of rolling lockdowns across Europe are getting the headlines. Oil is down on some supply and demand issues. Stimulus seems more and more unlikely by the day, at least pre-election.”

Coronavirus counts are spiking in much of the United States and Europe, raising concerns about more damage to the still-weakened economy. The U.S. came very close to setting back-to-back record daily infection rates on Friday and Saturday. In Europe, Spain's government declared a national state of emergency on Sunday that includes an overnight curfew, while Italy ordered restaurants and bars to close each day by 6 p.m. and shut down gyms, pools and movie theaters.

Hopes are fading, meanwhile, that Washington will be able to provide more support for the economy anytime soon. House Speaker Nancy Pelosi and Treasury Secretary Steven Mnuchin weren't able to reach an agreement in a phone call Monday, according to a Pelosi aide. The two have been discussing a potential deal to send cash to most Americans, restart supplemental benefits for laid-off workers and provide aid to schools, among other things.

Trump and Biden speak on a coronavirus relief package

President Donald Trump and his Democratic challenger, Joe Biden, blamed each other and each other’s political parties for the failure to provide a new round of coronavirus aid relief.

Deep partisan difference remains on Capitol Hill, and time is running out for anything to happen before Election Day on Nov. 3. Any compromise reached between House Democrats and the White House would also likely face stiff resistance from Republicans in control of the Senate. Another concern is that possible delays in sorting out the results of next week’s elections could end up pushing a stimulus deal back indefinitely.

Worries about the diminishing prospect for more stimulus in the short term helped drive the S&P 500 to a 0.5% drop last week, its first weekly loss in the last four.

“While we are seeing nations attempt to stifle the spread of the virus through more localised and tentative restrictions, it seems highly likely that we will eventually see a swathe of nationwide lockdowns if the trajectory cannot be reversed,” said Joshua Mahony, senior market analyst at IG in London.

The U.S. economy has recovered a bit since the stay-at-home restrictions that swept the country early this year eased, and economists expect a report on Thursday to show it grew at an annual rate of 30.2% during the summer quarter after shrinking 31.4% during the second quarter.

But momentum has slowed recently after a prior round of supplemental unemployment benefits and other stimulus that Congress approved earlier this year expired.

Stocks of companies that need the virus to abate and the economy to return to normal logged some of the sharpest losses Monday.

Energy stocks dropped to the largest loss among the 11 sectors that make up the S&P 500, falling in concert with oil prices. All told, about 92% of the stocks in the S&P 500 closed lower.

Among the market’s few gainers were companies that can succeed even in a stay-at-home economy. Zoom Video Communications gained 1.2%.

Amazon fared much better than the broader market, recovering from an early loss to close 0.1% higher, while Apple lost an early gain and ended flat. Expectations are high for them, and analysts say they'll report strong results for their latest quarter this week. They and other Big Tech stocks have soared through the pandemic on hopes their growth will only continue as work-from-home and other trends that benefit them accelerate.

This upcoming week is the busiest of this quarter's earnings season, with more than a third of the companies in the S&P 500 index scheduled to report. Besides Amazon and Apple, Ford Motor, General Electric and Google's parent company, Alphabet, are also on the docket.

Across the S&P 500, profit reports for the summer have been mostly better than Wall Street had feared, though they’re still on pace to be more than 16% lower than year-ago levels. Through Friday, 84% of S&P 500 companies reported better results than analysts had forecast, according to FactSet. If that level holds, it would be the best since at least 2008, when FactSet’s records begin.

Meanwhile, the upcoming U.S. elections could mean more short-term uncertainty in the markets and the results could determine the size and timing of any aid from Congress, said Esty Dwek, head of global market strategy at Natixis Investment Managers.

“It’s going to be a little bit volatile in the next week depending on the results, but we’re not expecting weeks of uncertainty,” she said.

European and Asian markets closed lower. The yield on the 10-year Treasury fell to 0.80% from 0.85% late Friday.