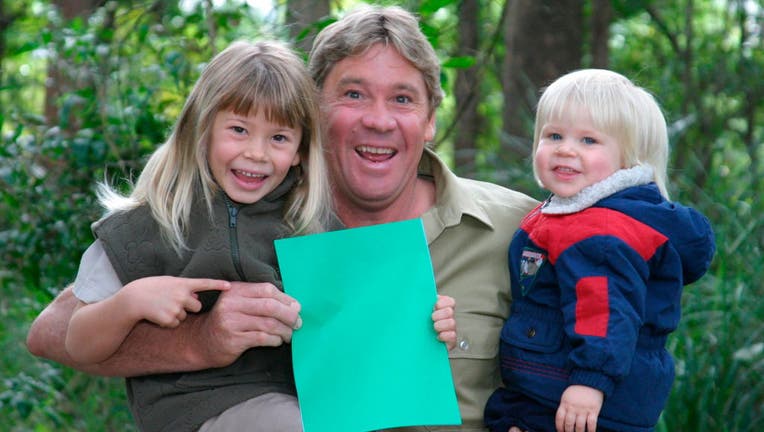 Bindi Irwin honored her father and her daughter's "Grandpa Crocodile" on the 16th anniversary of his death.

"Crocodile Hunter" star Steve Irwin died in 2006 after being stung by a stingray while filming a wildlife documentary. Bindi was 8 years old at the time while her brother Robert was 2.

Bindi, now 24, shared a throwback photo of her and her father on Sept. 4.

"Grandpa Crocodile, I know you would’ve been the most incredible grandfather because you were such an extraordinary dad," she wrote. "Thank you for being an amazing guardian angel for Grace."

Despite Steve's death happening before her daughter was born, Bindi has introduced her to the "Crocodile Hunter" through documentaries.

Steve Irwin's family marks what would have been his 58th birthday

"The Crocodile Hunter" was remembered in loving social media posts by his wife and children.

"He would’ve been a good, good grandpa," she said while pregnant with her daughter. "I don’t think we would’ve ever seen our daughter. He would’ve just whisked her away into the zoo, and it would’ve been perfect. But it is so nice that we’ll be able to introduce her to her grandfather through all of the documentaries. It’s really special."

The zookeeper paid tribute to her late father with her daughter's name, Grace Warrior.

"My dad was the first person to create the term ‘Wildlife Warrior,’" Bindi previously told The Bump. "Being a Wildlife Warrior means to stand up and speak for those who cannot speak for themselves. We’ve been referring to our daughter as our Baby Wildlife Warrior. I know in my heart that she will forge her own path to make our planet a better place."

Bindi's brother Robert also shared his own tribute to the "Crocodile Hunter" on Instagram.

"It's Father's Day today in Australia, and I am sending my love to those who are missing their dad today," he wrote. "I cherish all the good times with my dad and feel grateful to be able to keep his memory and legacy alive."