Montgomery County Councilmember and former president Nancy Navarro is calling for an investigation and action after two staffers were heard making comments about her accent during a virtual council session.&nbsp;The incident was caught on video.

ROCKVILLE, Md. (FOX 5 DC) - Montgomery County Councilmember and former president Nancy Navarro is calling for an investigation and action after two staffers were heard making comments about her accent during a virtual council session. The incident was caught on video.

Ironically, Navarro was talking about inequities with the coronavirus vaccine rollout when she says a staffer and IT contractor could be heard talking about the way she pronounces certain words.

She says she didn’t realize it at the time but started receiving calls right away from people watching.

Below is a rough transcript of what was overheard: 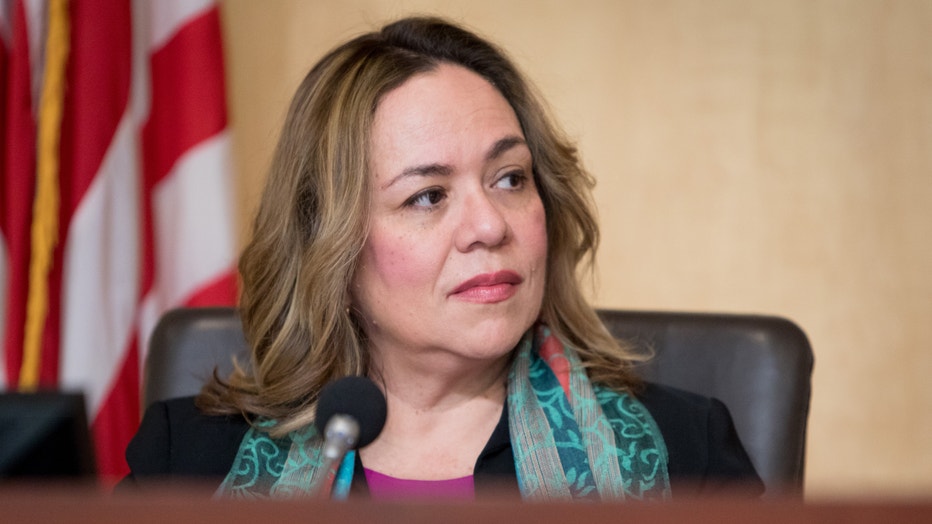 Montgomery County Councilmember Nancy Navarro listens during a hearing in Rockville, Md., on January 15, 2019. (Photo by Cheryl Diaz Meyer for The Washington Post via Getty Images)

"I’m not really there to be cute – I’m there as a policymaker," Navarro told FOX 5 Wednesday. "I’m the first immigrant to ever be elected to the Montgomery County Council, the first Latina and only woman."

Navarro wrote a letter to the council saying this is one example of the many racist microaggressions that community members and leaders of color stumble upon in daily life.

She’s asking for action to be taken and says this is a teachable moment for anyone who thinks that conversation was acceptable or no big deal.

"For some people, they may just brush it off and say it was an affectionate way of referring to somebody’s accent or something like that, but that is what leads to an environment where issues of discrimination, you know, inequities, disparities, etc., become amplified," said Navarro.

The male voice in the video belongs to the Zoom operator, who is a contractor with Montgomery Community Media.

Their CEO issued a statement reading, in part:

"Montgomery County Media does not condone nor tolerate such behavior by our employees. Appropriate measures have been and will be taken."

"What Councilmember Navarro is doing is important because I think what was said wasn’t meant to be heard. What they were saying was supposed to be on mute, I assume, and I believe we would not be having this conversation unless that slip-up happened, so it’s really important that we address it and make sure a clear message is sent. This is unacceptable and this is not how we should be operating as a society."

The Montgomery County Council later issued the following statement about the incident:

"The Montgomery County Council stands in solidarity with Councilmember Nancy Navarro after a troubling and unacceptable incident occurred during Tuesday's televised Council session, in which concerning background audio was heard on the broadcast. The entire Council is committed to racial equity and safe workplaces. Furthermore, our community expects that our Council and its employees and contractors are held to the highest standard.

County Council President Tom Hucker and Vice President Gabe Albornoz met with Council central staff leadership immediately following the incident and have directed the County's Office of Human Resources to conduct a full independent investigation of this incident. They are grateful to Councilmember Navarro for her willingness to come forward to shine a light on this disturbing incident. While the facts involved with this matter are being investigated, we will recommit ourselves to educating our workforce and fostering a culture that is absolutely respectful, free of bigotry and reflective of Montgomery County's values.

The Montgomery County Council reaffirms its pledge, which is found in our in our laws and policies, to foster equal opportunity for all without regard to race, color, religious creed, ancestry, national origin, sex, marital status, age, gender, disability, presence of children, family responsibilities, source of income, sexual orientation, gender identity, or genetic status as strictly in accordance with their individual merits as human beings.

We will all continue our work to address inequity and racial bias, and to create a future society where incidents like these do not ever happen."