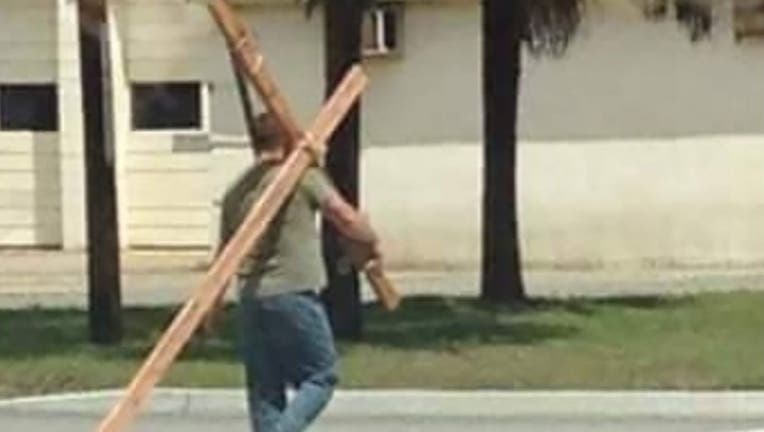 FOX NEWS - When an Andrews, S.C. man became a follower of Christ, he felt called to carry the cross. Now he's taking that call literally in a spiritual journey to the Grand Canyon.

Acie Burleson, 34, left his home state on March 11, traveling from town to town on back roads, carrying a wooden cross he built. Burleson told Fox News he is on the pilgrimage "because God called me to do it."

"The moment that I gave my life to God, my life was radically changed, and that's what makes this walk kind of easy -- is Jesus," Burleson shared in his most recent video on Facebook. "Jesus is amazing."

The husband and father of four told Fox News God told him to share the good news of the gospel and tell people to "pray and be ready for the coming of Christ."

The Southern man carries a small tent but he hasn't had to use it yet, getting generous offers from people and especially churches along the way for offers of shelter. He is traveling through Memphis Monday and plans on doing street preaching along the way.

Burleson estimates it will take three months to get to the Grand Canyon, and he doesn't know what he will do when he gets there, but he already has several miraculous stories to share.

"There was a woman driving and she was just looking at me, so I waved like 'Hello' and kept walking. She then cut me off and is just falling out of her window weeping and crying," Burleson told the Carolina News and Reporter.

"Just like that crying and I was like, 'Oh my gosh what's wrong? What happened? Are you alright?' and she said 'I was one block away from killing myself and you stopped me.'"

He is thankful to have the support of his wife and kids because on that particular day he didn't feel like getting up but his wife encouraged him to go. Others have stopped and prayed with him alongside the road.

Get updates on this story on FoxNews.com