Dialysis patient Brian Pinker, 82, was the first to get the new vaccine shot, administered by the chief nurse at Oxford University Hospital. (Credit: OUH via Storyful)

Britain’s health secretary on Monday warned that the coronavirus variant first detected in South Africa is a "very significant problem" and poses more of a risk than others. Matt Hancock told BBC radio that he’s "incredibly worried" about the new variant as others questioned whether currently approved vaccines would be effective against it.

South African researchers are already working to determine whether the vaccines developed to combat COVID-19 will see the same success against the new variant, identified as 501.V2. 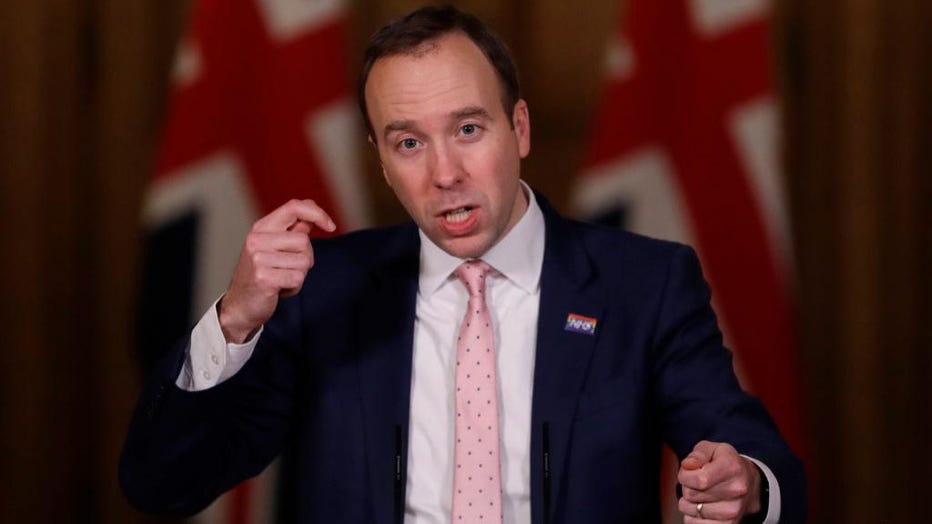 Britain's Health Secretary Matt Hancock speaks at a press conference inside 10 Downing Street on further restrictions to be put in place due to the ongoing coronavirus pandemic on Dec. 23, 2020 in London, England. (Photo by Kirsty Wigglesworth - WPA

"This is the most pressing question facing us right now," Dr. Richard Lessells, an infectious disease expert who is working on the country’s genomic studies of the variant, told the Associated Press. "We are urgently doing experiments in the laboratory to test the variant."

The variant has already been described as more infectious than the COVID-19 virus identified at the start of the pandemic. On Monday, Austria announced that it had discovered one case of the South African mutation in a 30-year-old woman who returned from a trip on Dec. 6.

The country also said it had detected four cases of the U.K. variant, which has also been detected in the U.S.

Britain is expected to expand further lockdown measures in a bid to stifle the spread of the new variant, which was discovered several weeks ago. The U.K. variant is believed to be the driving force of a new wave of coronavirus cases throughout the country.

"The spread of the new variant of COVID-19 has led to rapidly escalating case numbers across the country," a spokesperson for Prime Minister Boris Johnson said, according to Reuters. "The prime minister is clear that further steps must now be taken to arrest this rise and to protect the NHS and save lives. He will set those out this evening."