Wednesday is the last day of PTSD awareness month. A military widow and mother is sharing her family’s story of suicide to help save lives. She’s spreading awareness about mental health for veterans and warning of possible triggers like fireworks ahead of the Fourth of July.

ANNAPOLIS, Md. (FOX 5 DC0 - The Midshipman Candidate whose mother was struck and killed by a stray bullet ahead of his Naval Academy induction in Annapolis has departed on emergency leave after checking in.

The incident happened early Tuesday when 57-year-old Michelle Jordan Cummings stepped outside of a hotel room and onto the patio where she was struck by a stray bullet.

The Cummings family had only just arrived in Annapolis to celebrate the Naval Academy induction of their son, Leonard Cummings III, who also planned to play football.

Police in Annapolis are continuing to search for a murderer after a woman whose son was about to be inducted into the Naval Academy was shot and killed on a hotel patio.

FOX 5's Melanie Alnwick says Cummings III, who also goes by Trey, had settled into his dorm room at the Naval Academy when his father and Naval Academy leaders woke him overnight with the news.

The Naval Academy and their extended families have rallied around the Cummings family to offer support. 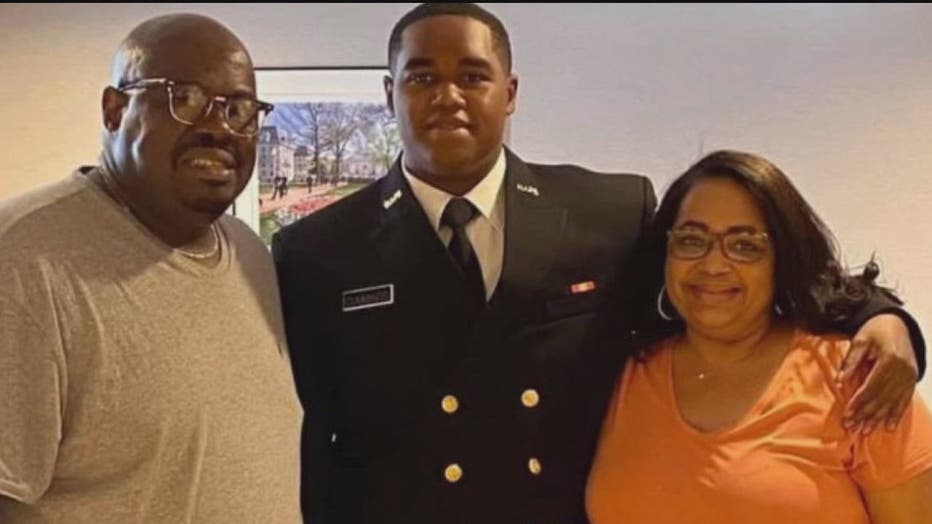 Investigators say the shot that struck and killed Cummings was fired from behind the hotel on Pleasant Street. "You come here with the expectation to see your son go on a journey, one of the most exciting times of his life, only to be met by a reckless shooter," Annapolis Police Chief Edward Jackson said Tuesday. "So what I'll say to the shooter, 'Turn yourself in. We're coming after you.'"

Investigators say they hope to locate surveillance video that could help them find those responsible.