FAIRFAX COUNTY, Va. (FOX 5 DC) - A suspect has been identified in a smash-and-grab armed robbery in Springfield, according to police.

Fairfax County Police say Lamont Marable, 25, of Maryland is wanted for commercial robbery, use of a firearm in the commission of a felony and conspiracy to commit a felony. 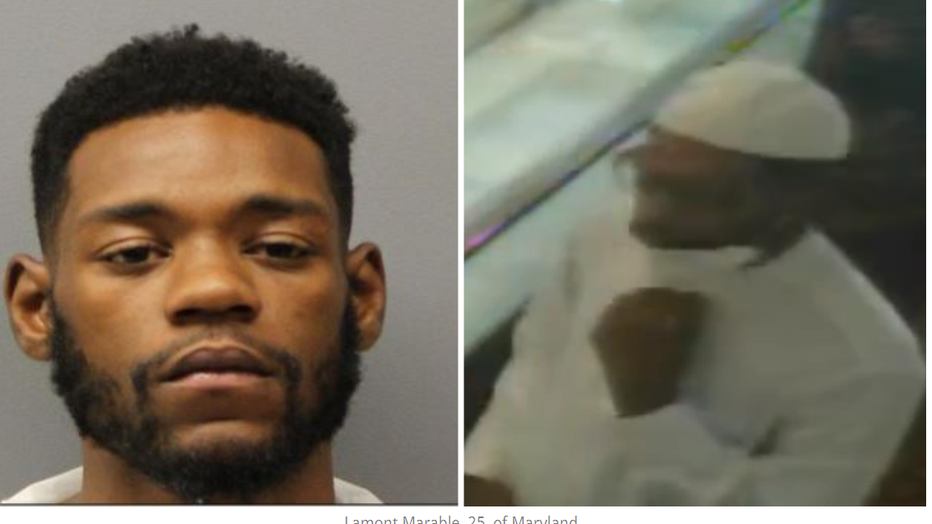 The incident occurred on Sept. 20, part of a string of smash-and-grab robberies in the area, at Sonia Jewelry & Boutique Inc. located at 6681 Backlick Road in Springfield.

Jewelry store managers are speaking out about brazen smash-and-grab robberies at their Fairfax County stores. Police are still searching for the robbers linked to three smash-and-grabs in less than two weeks.

Police say two men, one of them armed with a handgun, used hammers to destroy cases before fleeing in a vehicle with stolen plates.

The first incident in this string of robberies was reported on Sept. 8 at the Prince Jewelers in Tyson's Corner Center where police say three men destroyed display cases and stole high-end watches and jewelry.

Detectives have also released the video below of the robbery from Sept. 20.

A suspect has been identified in a smash-and-grab armed robbery in Springfield, according to police.