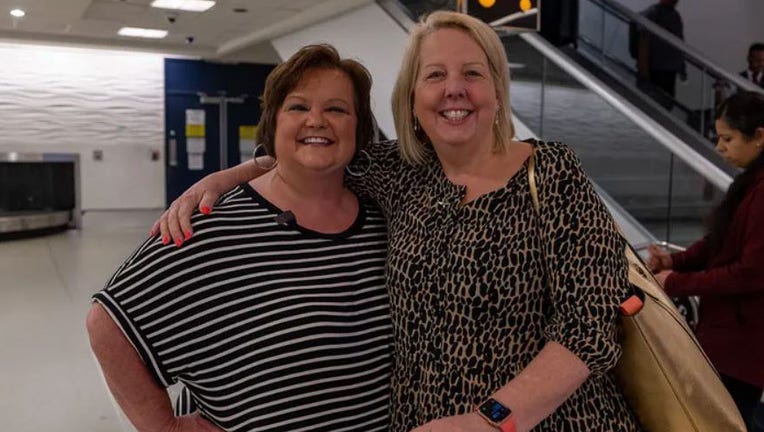 Mary McLaughlin, 56 (left) and Diane Ward, 59 (right), are half-sisters. They met face-to-face for the first time earlier this year. Both sisters were born in Michigan to the same mother but were raised by two different families. (MyHeritage)

Two sisters who did not know the other existed finally found each other after more than 50 years.

Diane Ward, 59, and Mary McLaughlin, 56, were both born in Michigan to the same mother.

They were raised by different families, however — and finally met face-to-face for the first time in June 2022.

TWIN SISTERS HELP SAVE WOMAN WITH MEDICAL EMERGENCY ON FLIGHT FROM BOSTON TO FORT MYERS, FLORIDA

Ward, who currently lives in England with her husband, was adopted soon after she was born.

McLaughlin, meanwhile, who lives in Paragould, Arkansas, was raised by their mother for a few weeks before her mother's neighbors took guardianship of her, the sisters told Fox News Digital.

Ward knew she was adopted but did not know anything about their biological mother when she was growing up in Pittsburgh. 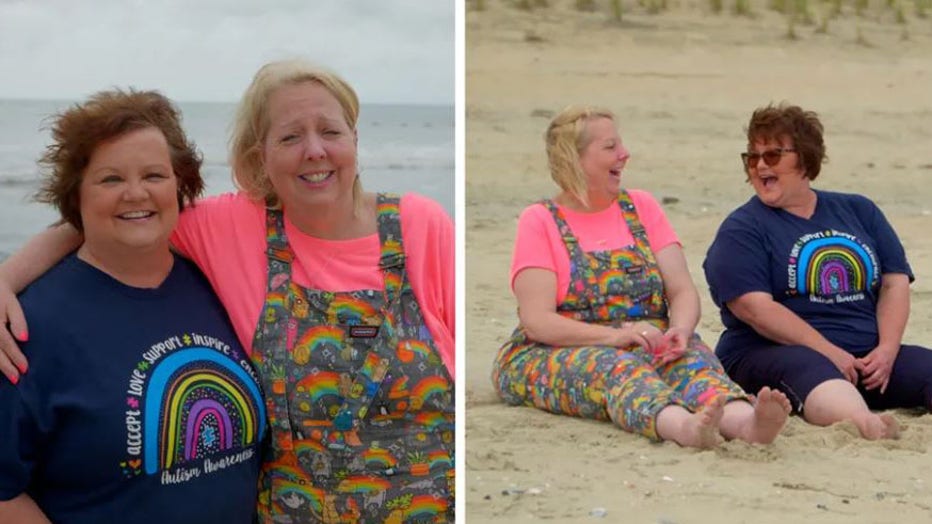 Mary McLaughlin, 56 (left) and Diane Ward, 59 (right), are half-sisters, who met for the first time in-person earlier this year. (MyHeritage)

However, McLaughlin, who grew up in Michigan, was able to maintain a connection with their mother.

Neither of them knew they had a sister until about four years ago, the women said.

"For some reason, it just never occurred to me that I might have a sibling."

Ward said that in 2018, she decided she wanted to find her biological mother.

For Christmas that year, she got a DNA kit from MyHeritage, a company that helps people research their family history through DNA tests and historical records.

"I was focused on parents," Ward said of her attempt to track down her mother and father. "For some reason, it just never occurred to me that I might have a sibling."

Ward did the test and got her results back within a couple of weeks.

In those results, Ward saw that she had a second or third cousin — whom she reached out to for more information.

After confirming that McLaughlin was comfortable being connected to Ward, the cousin then introduced the half-sisters to each other online. 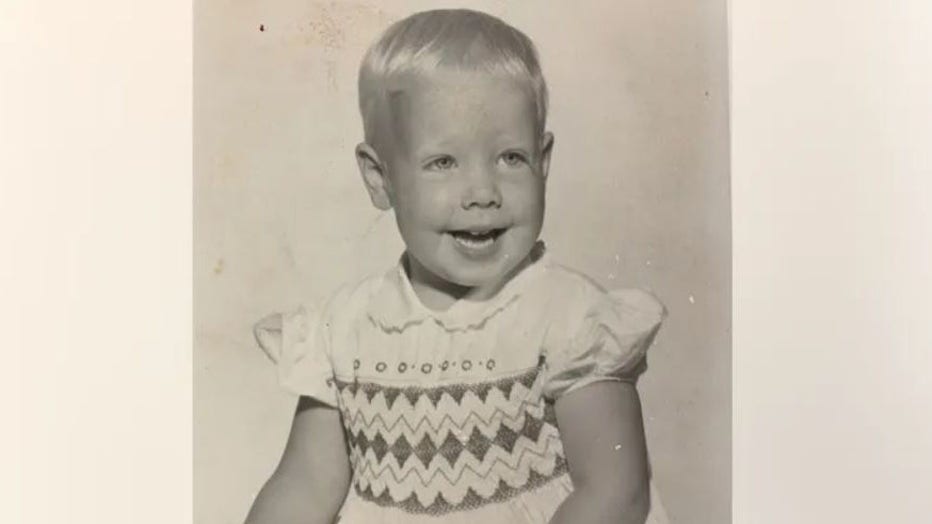 Soon after Diane Ward was born in Michigan, she was adopted by a local family. The family moved to Pittsburgh, where Ward was raised. (Courtesy Diane Ward)

They said that soon after that, they were meeting on a video chat for the first time.

"Just talking about it, I still get so excited," Ward said of the sisters' call.

McLaughlin told Fox News Digital that her husband was in the room and was watching her face and her body language to make sure everything was going OK.

"He went, ‘Oh my God, that’s your sister,'" McLaughlin recalled. 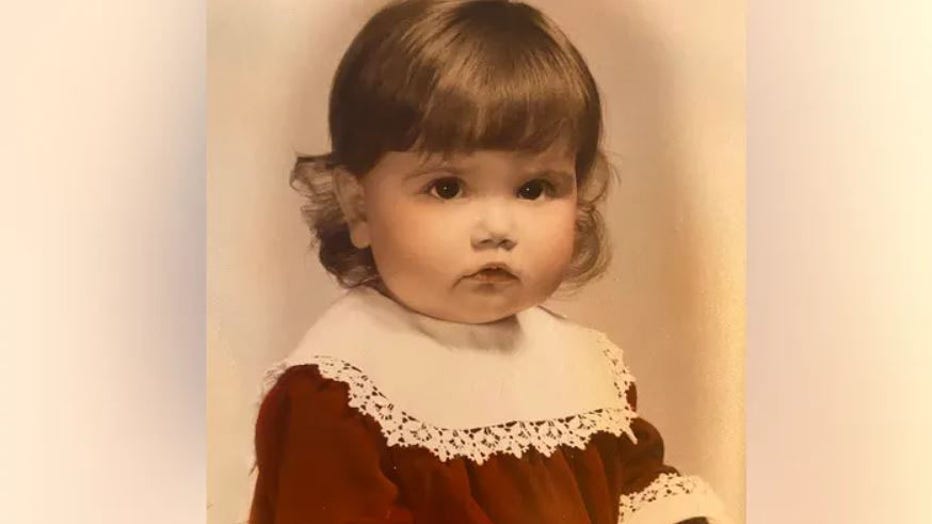 Mary McLaughlin was raised by her mother for about five months before neighbors became McLaughlin's guardians. She grew up in Michigan — and continued to have a relationship with her birth mother. (Courtesy Mary McLaughlin)

After that call, they continued to video chat and message on WhatsApp daily.

Over time, they discovered their numerous similarities, including "weird pinkies," "webbed toes" and a snarky sense of humor.

TWIN HELPS SISTER START A FAMILY AFTER SAVING HER LIFE: ‘NOTHING I WOULDN’T DO FOR HER’

Ward was also able to learn more about her personal and family history.

She was put up for adoption after birth because her mother was still a teenager when Ward was born.

Ward and McLaughlin said that since meeting virtually, they've learned that they spent their childhood summers in the same areas.

Meanwhile, their mother cared for McLaughlin for a few weeks before she asked the neighbors to babysit — and never returned, McLaughlin told Fox News Digital.

Social services asked the neighbors to take guardianship of McLaughlin, and they agreed to do so, which is how she was raised by her adopted family.

MOM OF 12 KIDS, PREGNANT FOR 16 YEARS IN A ROW, SHARES STRONG MESSAGE OF FAITH: ‘CHILDREN ARE A BLESSING’

McLaughlin's mother did eventually return, but the neighbors continued to raise their new little girl.

Ward said she still does not know who her birth father is — though she is looking for him. 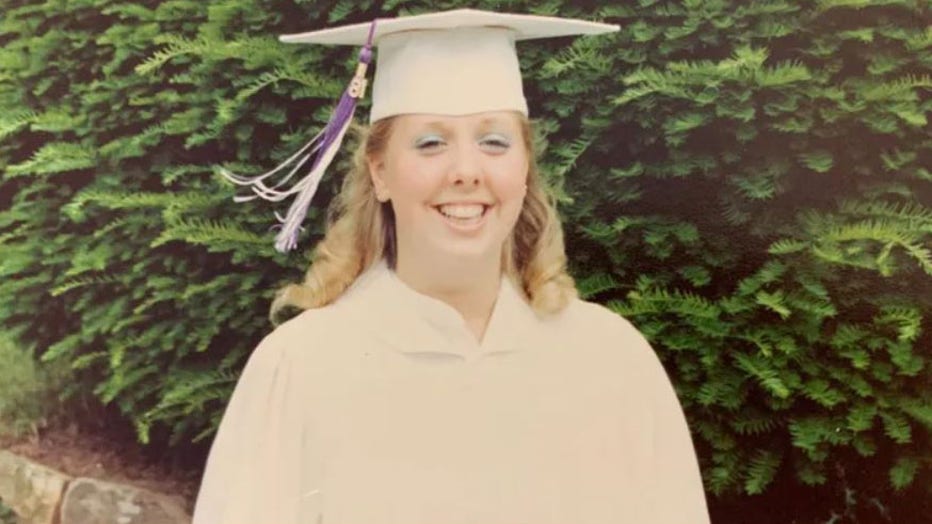 When they were growing up, Diane Ward (pictured) and Mary McLaughlin ended up visiting each other's hometowns. Ward's adoptive mother had family in Michigan, while McLaughlin's adoptive family had relatives in Pittsburgh. (Courtesy Diane Ward)

Ward and McLaughlin said that since they met virtually, they learned that they spent their childhood summers in the same areas.

Though Ward’s adoptive family moved to Pittsburgh, her adoptive mother’s family stayed in Michigan. So Ward and her family would return to the town where she was born to see relatives.

"That random piece of it was really mind-boggling," she added. 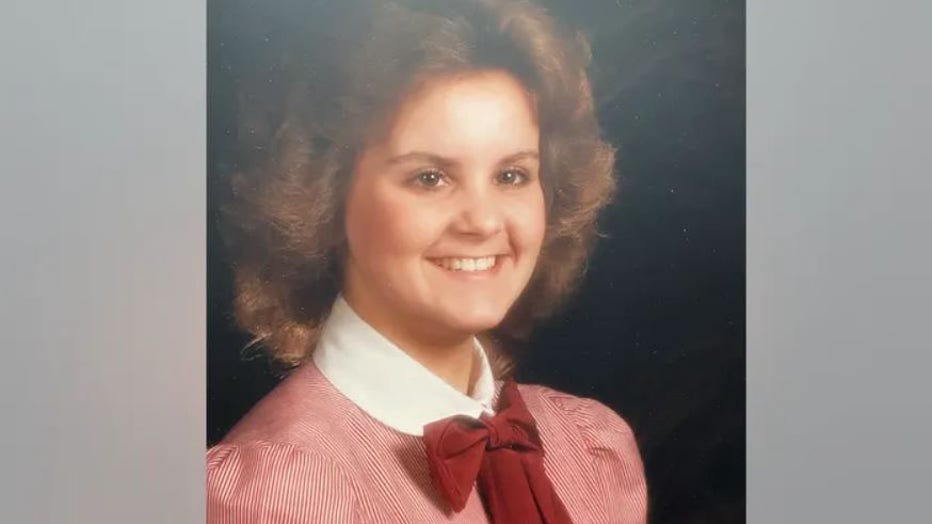 Mary McLaughlin told Fox News Digital that when she found out she had a sister, she wished she'd been able to grow up with her. "Initially, I really, really was ticked off," she said. (Courtesy Mary McLaughlin)

Similarly, McLaughlin spent some summers visiting Pittsburgh since her adoptive mother had family there.

Even today, McLaughlin lives close to where some of Ward’s adoptive family lives.

"It is so crazy," McLaughlin said.

Ward added, "We’re meant to be in close circles to each other at all times."

Due to the coronavirus pandemic, Ward and McLaughlin were not able to meet face-to-face until June of this year. That is when McLaughlin invited Ward and her husband to join her extended family for a vacation at the beach.

"It’s like the whole family are all wise-cracking and funny smart-alecks," Ward said. "It was just everybody bouncing off each other and just having such a good time." 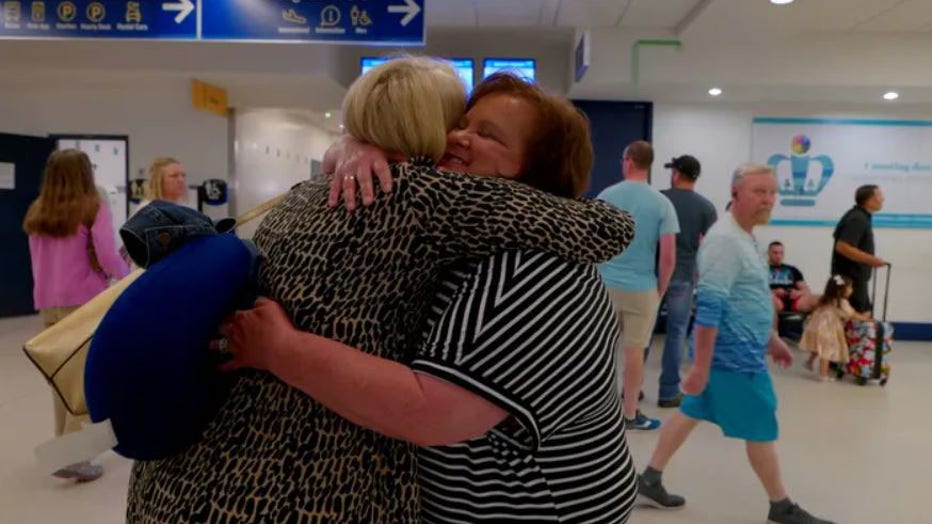 Though Diane Ward, left, and Mary McLaughlin, right, met virtually in about 2018, they were not able to meet in person until 2022. The sisters are pictured hugging at the airport during their first face-to-face meeting. (MyHeritage)

As Ward was saying her goodbyes, McLaughlin’s daughter, Liza, gave her a hug, then turned to Ward and McLaughlin to make a joke.

Ward recalled, "She looked at both of us, and she goes, ‘Oh great. Now there’s two of you, one on each continent.'" 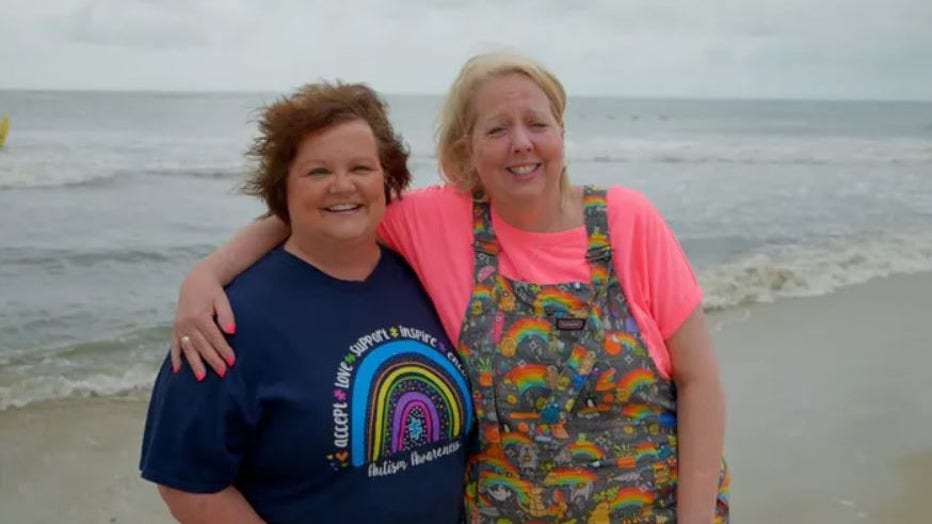 Mary McLaughlin, left, invited Diane Ward, right, to her family's reunion at the Outer Banks in North Carolina in June 2022. Ward and her husband agreed to travel from their home in the U.K. for the celebration. (MyHeritage)

"And I said, ‘Well, you’d better be careful because we might do another DNA test and find another one,'" Ward added, laughing.

"Now there’s two of you, one on each continent."

When Ward and McLaughlin first met, McLaughin said she was angry that she did not get to grow up with her sister or have someone to talk to through all the difficulties of life.

"Initially, I really, really was ticked off," McLaughlin said. 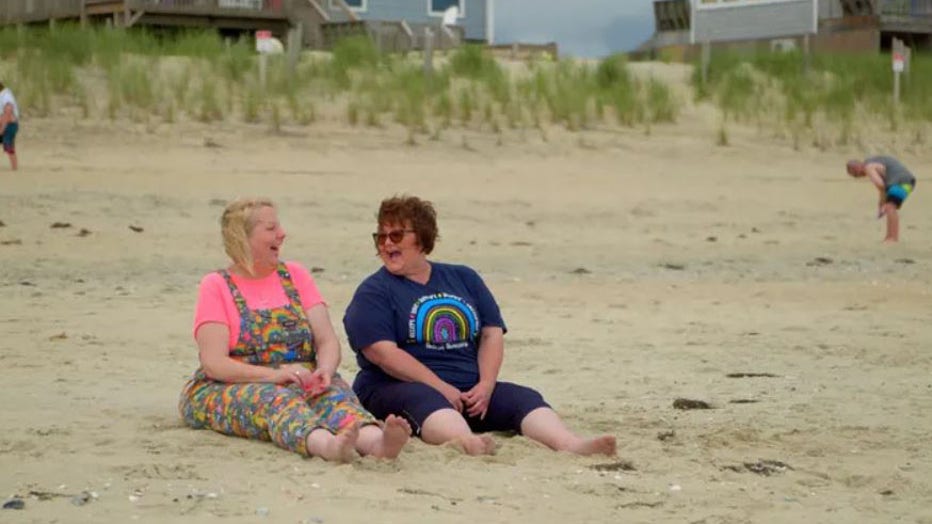 Over time, McLaughlin has come to realize that it was perfect timing when she met Ward.

Ward said she had a similar experience. Meeting McLaughlin has "answered a lot of questions that I’ve grown up my whole life wondering," Ward said.

"I don't think I would have appreciated them when I was younger," Ward added.

"I think it would have passed me by and I wouldn't have appreciated Mary the way I do now."

Even though she started her journey with MyHeritage in search of a mother, Ward is so happy to have found a sister — and a friend.

Mary McLaughlin, 56 (left) and Diane Ward, 59 (right), are half-sisters, who met for the first time in-person earlier this year. (MyHeritage)

"Mary and I get on so well, and we think alike, and we have very similar personalities," Ward said.

"And I enjoy spending time with her … In fact, I wish I lived closer."

"To have a sibling instead of a parent … it was a godsend," Ward added. "I think it was what was meant to be."

Get the latest updates on this story at FOX News.com.