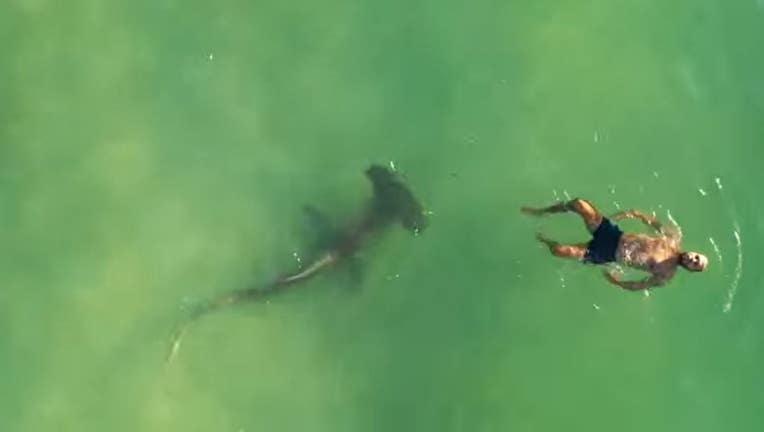 A screengrab from a video shared by the University of Miami (UM) Rosenstiel School of Marine and Atmospheric Science shows a great hammerhead exploring the shallows off Miami Beach under a swimmer. (Credit: JMac / Jason McIntosh)

MIAMI - As the world’s coastlines become more crowded, researchers behind a new study expected that sharks would generally avoid the bright lights, loud noises, and chemicals in the water near these urban areas. But that’s not what they found.

The study, published on June 16 in the journal Marine Ecology Progress Series, tracked the movements of three shark species — bull, nurse and great hammerhead — in relation to Miami, Florida.

"We were surprised to find that the sharks we tracked spent so much time near the lights and sounds of the busy city, often close to shore, no matter the time of day," Neil Hammerschlag, lead study author and director of the University of Miami’s Shark Research and Conservation Program, said in a statement.

Few studies have looked at movements of ocean predators like sharks in relation to urbanization, Hammerschlag said. Since land predators like wolves are "urban avoiders," or animals that are sensitive to human disturbance, the researchers assumed sharks would be too.

But instead, the team concluded that the behaviors of the tracked sharks resembled that of "urban adapters," or animals that may show some use of cities but are still dependent on more natural areas too. Examples of these types of animals include coyotes, groundhogs, and opossums.

On the far end of the spectrum, "urban exploiters" like pigeons and raccoons can thrive in cities.

The study noted how the sharks’ relatively high use of urban areas, which often means crowded beaches, may have consequences for both humans and sharks.

"By spending so much time close to shore, sharks are at risk of exposure to toxic pollutants as well as fishing, which could impact their health and survival," Hammerschlag said.

Several hammerhead sharks circled some beachgoers at a Pensacola, Florida beach over the Memorial weekend.

Florida had the most unprovoked bites nationwide last year with 28 cases (or 60% of the U.S. total and 38% of the total worldwide).

VIDEO: Shark leaps out of ocean behind unsuspecting surfer

The study of tracked sharks near Miami noted that the ocean predators’ frequent use of urban areas may put humans at a higher risk of shark encounters. The researchers said this is especially the case "in areas where sharks may be attracted to scavenge on fish discards."

Most shark bites are related to surfing and board sports, and the chances of being bitten still remain "extremely low," the International Shark Attack File says. It offers resources for reducing the risk of a shark bite and instructions for what to do if one encounters a shark.

RELATED: Sarasota scientist hopes to figure out: What do our baby sharks do-do-do-do-do?

Why are sharks attracted to the busy shorelines?

The study speculated that sharks could be attracted to the shore areas due to land-based activities, such as the dumping of fish carcasses by local businesses and fishermen. The researchers noted several marinas situated along the shoreline of the North Bay of Biscayne Bay, which hugs the Miami metropolitan area.

"At these marinas, anglers returning from a day of fishing commonly discard fish carcasses after removing the filets, even at marinas with no-discard regulations in place," the study notes. "Sharks are regularly seen in marinas scavenging on these fish carcasses, which may be attracting or aggregating sharks to these locations."

The study authors also hypothesized that different behaviors between marine and land predators when it comes to crowded cities may be related to "fundamental differences in how urbanization impacts land versus ocean landscapes."

As wildlife becomes "increasingly challenged by a rapidly changing world," the study noted how more urban ecology research is needed on this topic.

The study was funded by the Ocean Tracking Network, the Disney Conservation Fund, the Save Our Seas Foundation, the National Oceanic and Atmospheric Administration (NOAA) Southeast Fisheries Science Center, the Batchelor Foundation, the Herbert W. Hoover Foundation, and others.