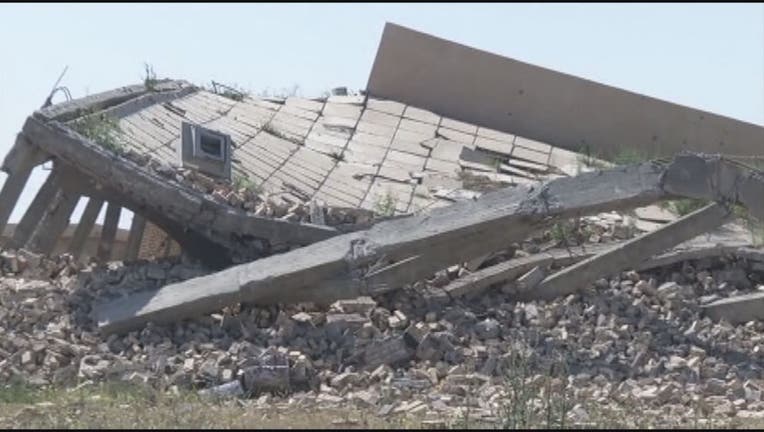 OUJA, Iraq (AP) -- The tomb of Iraq's late dictator Saddam Hussein was virtually leveled in heavy clashes between militants from the Islamic State group and Iraqi forces in a fight for control of the city of Tikrit.

Fighting intensified to the north and south of Saddam Hussein's hometown Sunday as Iraqi security forces vowed to reach the center of Tikrit within 48 hours. Associated Press video from the village of Ouja, just south of Tikrit, shows all that remains of Hussein's once-lavish tomb are the support columns that held up the roof.

Poster-sized pictures of Saddam, which once covered the mausoleum, are now nowhere to be seen amid the mountains of concrete rubble. Instead, Shiite militia flags and photos of militia leaders mark the predominantly Sunni village, including that of Maj. Gen. Qassem Soleimani, the powerful Iranian general advising Iraqi Shiite militias on the battlefield.

"This is one of the areas where IS militants massed the most because Saddam's grave is here," said Captain Yasser Nu'ma, an official with the Shiite militias, formerly known as the Popular Mobilization Forces. "The IS militants' set an ambush for us by planting bombs around" the tomb.

The extremist Islamic State group has controlled Tikrit since June, when it waged its lightning offensive that saw Iraq's second-largest city, Mosul, come under their control. The Islamic State was helped in its conquest of northern Iraq by Saddam loyalists, including military veterans, who appealed to Sunnis who felt victimized by Baghdad's Shiite-dominated government.

The Islamic State group claimed in August that Saddam's tomb had been completely destroyed, but local officials said it was just ransacked and burned, but suffered only minor damage.

Saddam was captured by U.S. forces in 2003 and was executed by hanging in December 2006 after an Iraqi special tribunal found him guilty of crimes against humanity for the mass killing of Shiites and Kurds. His body has been kept in the mausoleum in his birthplace, Ouja, since 2007. The complex featured a marble octagon at the center of which a bed of fresh flowers covered the place where his body was buried. The extravagant chandelier at its center was reminiscent of the extravagant life he led until U.S. forces toppled him in 2003.

Iraqi media reported last year that Saddam's body was removed by loyalists amid fears that it would be disturbed in the fighting. The body's location is not known.

Recapturing Tikrit, a Sunni bastion on the Tigris River, would pave the way for an assault on Mosul, which U.S. officials have said could come as soon as next month.

Concerns are mounting that Iraq's Shiite militias, of which an estimated 20,000 are fighting in Tikrit, will carry out revenge attacks on this and other areas that are home to predominantly Sunni residents.

Amnesty International last year said the militias wear military uniforms but operate outside any legal framework and without any official oversight, adding that they are not prosecuted for their crimes. Earlier this month, Human Rights Watch echoed those concerns, calling on the Iraqi government to protect civilians in Tikrit and allow them to flee combat zones. Its statement noted "numerous atrocities" against Sunni civilians by pro-government militias and security forces.

Shiite militants are increasingly being accused of leveling the Sunni towns they capture from the Islamic State group, making it impossible for residents to return. Tikrit has already been heavily damaged in months of violence. A satellite image of Tikrit, released last month by the United Nations, observed that at least 536 buildings in the city have been affected by the fighting, with at least 137 completely destroyed and 241 severely damaged.

Local Sunni tribal fighters have formed uneasy alliances with the Iraqi army and Shiite militias in the battle for Tikrit, which Iraqi and U.S. officials believe is essential for defeating the Sunni militant group.

Yazan al-Jubouri, a Sunni from Tikrit fighting alongside the Shiite militias, said that the Islamic State militants killed 16 of his relatives and kept his family living in horror.

"We want to take revenge on those IS militants who killed our children," he said.