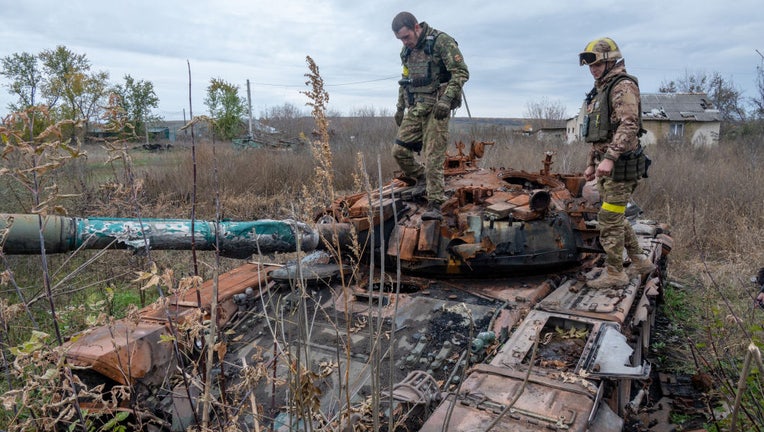 Serviceman of the National Guard of Ukraine inspects a destroyed Ukrainian armored personnel carrier in the retaken territory in the north of the Kharkiv Oblast as Russia-Ukraine war continues on October 25, 2022 in Ukraine. (Stringer/Anadolu Agency

KYIV, Ukraine - Ukrainian forces attacked Russia's hold on the southern city of Kherson on Thursday while fighting also intensified in the country's east. The battles came amid reports that Moscow-appointed authorities in Kherson have fled the city, joining tens of thousands of residents who have been evacuated to other Russia-held areas.

Ukrainian forces were surrounding Kherson from the west and attacking Russia’s foothold on the west bank of the Dnieper River, which divides the region and the country.

Amid the battles, Russia issued a warning that the United States could be drawn into the conflict, adding it could target Western commercial satellites used for military purposes in support of Ukraine.

Russian Foreign Ministry spokeswoman Maria Zakharova accused the United States of pursuing "thoughtless and mad" escalation. She argued that Washington should take a more responsible approach shown during the 1962 Cuban Missile Crisis ‒ when the Cold War superpowers stepped back from the brink of nuclear confrontation.

Ukraine has pushed ahead with an offensive to reclaim the Kherson region and its capital of the same name, which Russian forces captured during the first days of a war now in its ninth month.

Members of the Russia-backed regional administration were included in the evacuation, the deputy governor, Kirill Stremousov said. Monuments to Russian heroes were moved, along with the remains of Grigory Potemkin, the Russian general who founded Kherson in the 18th century, that were kept at the city’s St. Catherine’s Church.

In eastern Ukraine, Russian forces continued to bombard the city of Bakhmut in the Donetsk region, making slow gains toward the center.

Amid the heavy combat on two fronts, Russian officials stepped up warning that the West could become part of the conflict.

"The more the U.S. is drawn into supporting the Kyiv regime on the battlefield, the more they risk provoking a direct military confrontation between the biggest nuclear powers fraught with catastrophic consequences," said Zakharova, the Russian Foreign ministry spokeswoman.

The deputy head of Russia’s delegation at a U.N. arms control panel, Konstantin Vorontsov, described the use of U.S. and other Western commercial satellites for military purposes during the fighting in Ukraine as "extremely dangerous."

"The quasi-civilian infrastructure could be a legitimate target for a retaliatory strike," Vorontsov warned.

As they have all month, Russian forces carried out attacks on Ukraine's energy infrastructure, which have caused increasing worry ahead of winter.

"The Russians are using drones and missiles to destroy Ukraine’s energy system ahead of the winter and terrorize civilians," Kuleba said in televised remarks.

Kuleba announced new rolling blackouts and urged consumers to save power. He said authorities were still pondering over specifics of the blackouts needed to restore the damaged power facilities.

In a likely response to Russia's attacks on Ukrainian infrastructure, a power plant was attacked just outside Sevastopol, a port in the Russian-annexed region of Crimea. The plant suffered minor damage in a drone attack, according to city leader Mikhail Razvozhayev. He said electricity supplies were uninterrupted.

Crimea, a region slightly larger than Sicily, was annexed by Russia from Ukraine in 2014. It has faced drone attacks and explosions amid the fighting in Ukraine. In a major setback for Russia, a powerful truck bomb blew up a section of a strategic bridge linking Crimea to Russia’s mainland on Oct. 8.

A senior Ukrainian military officer accused Russia of planning to stage explosions at the Zaporizhzhia Nuclear Power Plant and blame them on Ukraine in a false flag attack.

Gen. Oleksii Gromov, the chief of the main operational department of the Ukrainian military’s general staff, pointed to Moscow's repeated unfounded allegations that Ukraine was plotting to detonate a radioactive dirty bomb as a possible signal that Moscow was planning explosions at the plant, Europe’s largest nuclear power station.

Russia took control of the Zaporizhzhia plant in the opening days of the invasion. Russia and Ukraine have accused each other of attacking the plant, whose reactors were shut down following continuous shelling.

Gromov also charged Thursday that Russian forces may have staged explosions at residential buildings in the city of Kherson before retreating from the city "to inflict critical damage to the infrastructure of the areas being reclaimed by Ukraine."

The war in Ukraine and the resulting energy crisis is likely to cause global demand for fossil fuels to peak or flatten out, according to a report released Thursday by the Paris-based International Energy Agency, largely due to the fall in Russian exports.

"Today’s energy crisis is delivering a shock of unprecedented breadth and complexity," the IEA said, releasing its annual report, the World Energy Outlook.

The report said this was forcing the world's more advanced economies to accelerate structural changes toward renewable energy sources.