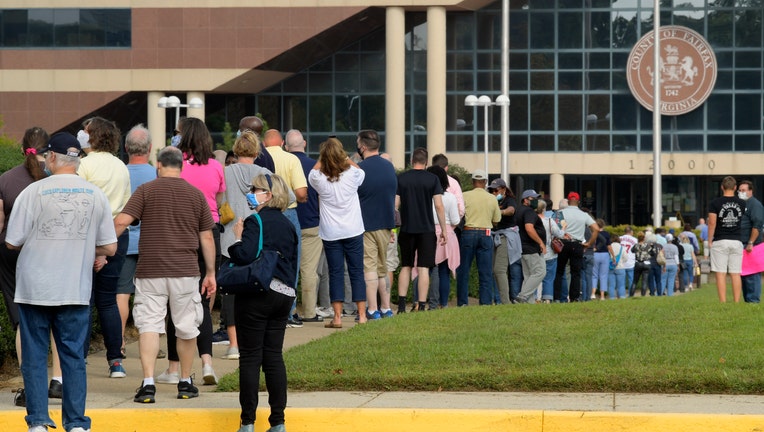 A very long line of voters wait to cast their ballots at the Fairfax County Government Center for the November presidential election on the first day of early voting in Virginia in Fairfax, VA on September 18, 2020. (Photo by John McDonnell/The Washi

FALLS CHURCH, Va. (AP) - Enacting restrictions to prevent the spread of the coronavirus is more important than removing them to get the economy going, according to a majority of Virginia voters polled this month.

The poll conducted by Hampton University and The Associated Press-NORC Center for Public Affairs Research found that 62% think the biggest priority for their community is to prevent the coronavirus from spreading, even if it hurts the economy, while 35% said removing restrictions to help the economy, even if more people get the virus, is the bigger priority.

VOTING IN VIRGINIA 2020: Everything you need to know county by county

John Bordeaux, 61, of Lorton, is among those who said controlling the virus is a greater priority. He said he's worried that younger people are willing to risk prolonged potential exposure at bars and other indoor gathering places, just because statistics show that older people are more vulnerable.

“I don't think we know enough to make that assessment,” particularly when it comes to how the virus is transmitted, said Bordeaux, a policy researcher.

Paul Gilbert said he'd rather see restrictions removed, if he had to choose, but that those two opposing choices don't really reflect his thinking. More than anything, he said, he just wants the choices to be guided by science rather than politics, wherever that leads.

“If we don't get out of this thing, there's not going to be an economy to worry about,” said Gilbert, 42, a disabled veteran from Suffolk.

Like other states, Virginia has debated the degree to which the economy and society should be open as the pandemic stretches on, and the coronavirus response has been a key issue in the presidential campaign. In Virginia, the politics of that debate have featured frequent barbs from President Donald Trump directed at Democratic Gov. Ralph Northam.

In April, during some of the strictest coronavirus restrictions, Trump tweeted “LIBERATE VIRGINIA," an apparent reference to both gun control measures and COVID-19 restrictions. While both Trump and Northam, a physician, contracted the coronavirus, Trump has pushed for a “return to normal” and mocked the use of masks to prevent the virus's spread, while Northam has advocated masks and other measures to keep the virus in check.

The poll shows that between September and October, the standing of Northam and other Democrats improved somewhat. Northam's favorability rating is now 49%, up slightly from 42% of those responding to a Hampton University/AP-NORC poll last month.

The Democratic presidential ticket of Joe Biden and Kamala Harris showed similar improvements. Biden's favorability rating ticked up slightly, from 47% to 52%, while positive ratings of Harris increased somewhat from 42% to 50%.

Positive views of Trump, meanwhile, remained roughly the same: 39% say they have a favorable opinion of the president, similar to 37% last month.

The poll also shows a significant shift in voting plans, with more people saying they plan to cast their ballot in person before Election Day. Voters have seen long lines at early polling places across the state in recent weeks.

Roughly 3 in 10 Virginia voters in both polls indicated plans to vote by mail.

The poll shows a deep divide between Republicans and Democrats about how they plan to vote, which might influence how returns come in on election night.

About 8 in 10 Democrats say they’re voting in advance of the election, including about 4 in 10 by mail and about another 4 in 10 early in person. By contrast, about two-thirds of Republicans say they will vote in person on Election Day.

The AP-NORC/Hampton University poll of 887 registered voters in Virginia was conducted Oct. 6-12 by mail, with the option for respondents to take the survey online or by phone. The margin of sampling error for all respondents is plus or minus 4.6 percentage points.