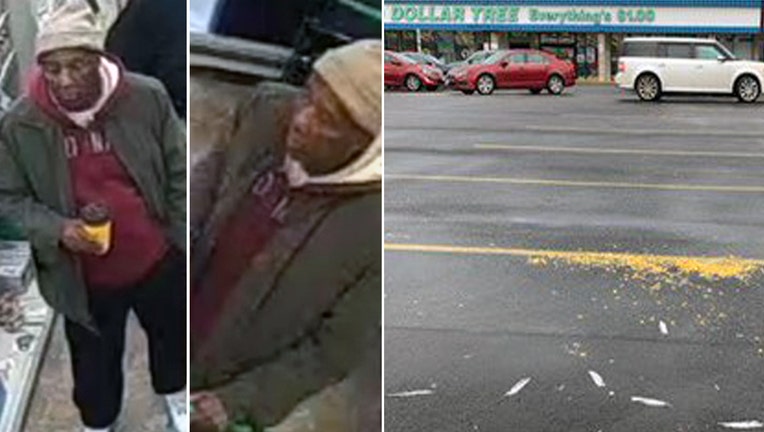 A suspect is accused of luring seagulls in a Laurel parking lot and intentionally running them over, killing 11 seagulls on Jan. 4, 2020, according to police.

LAUREL, Md. (FOX 5 DC) - Photos of a suspect accused of luring 11 seagulls with popcorn then intentionally running them over in an SUV and killing them in a Laurel parking lot have been released by police.

The Laurel Police Department said the suspect went to the Dollar Tree in the 9600 block of Meade Road at the Laurel Plaza Shopping Center where he purchased cheddar popcorn on Jan. 4.

Witnesses spotted the suspect luring a group of seagulls with the popcorn in the parking lot, according to authorities.

After luring the seagulls, the suspect hit them with his SUV, killing 11 seagulls, officials stated.

Police have released photos of a suspect who is accused of intentionally killing seagulls in Maryland.

The suspect was described by police as a black man in his 50s or 60s, last seen wearing a burgundy Old Navy sweater, a dark muted green jacket, black sweatpants, white sneakers and a beige beanie-style hat.

The vehicle used in the killing of the seagulls was described as a newer-model, blue-gray Chevrolet Equinox with Maryland tags and a roof rack.

If you have any information that can aid detectives in their investigation, you’re urged to contact Cpl. Laura Wilson with the Laurel Police Department at Lwilson@laurel.md.us.