All 3 COVID-19 vaccines are effective against delta variant, Fauci says

LOS ANGELES - As the delta variant continues to cause a surge in COVID-19 infections globally, a new study revealed that two doses of the Pfizer vaccine are 88% effective against the highly contagious strain.

According to the study published in the New England Journal of Medicine Wednesday, researchers identified variants through sequencing, with more than 38,000 linked sequenced tests analyzed over the course of the study period.

Researchers found with the Pfizer vaccine, the effectiveness of two doses was 93.7% among people with the alpha variant and 88% among those with the delta variant.

"Overall, we found high levels of vaccine effectiveness against symptomatic disease with the delta variant after the receipt of two doses," the study authors wrote.

But effectiveness after only one dose of the vaccine was notably lower — only 30.7% effective against the delta variant — driving home previous suggestions by officials to obtain two doses of a vaccine. 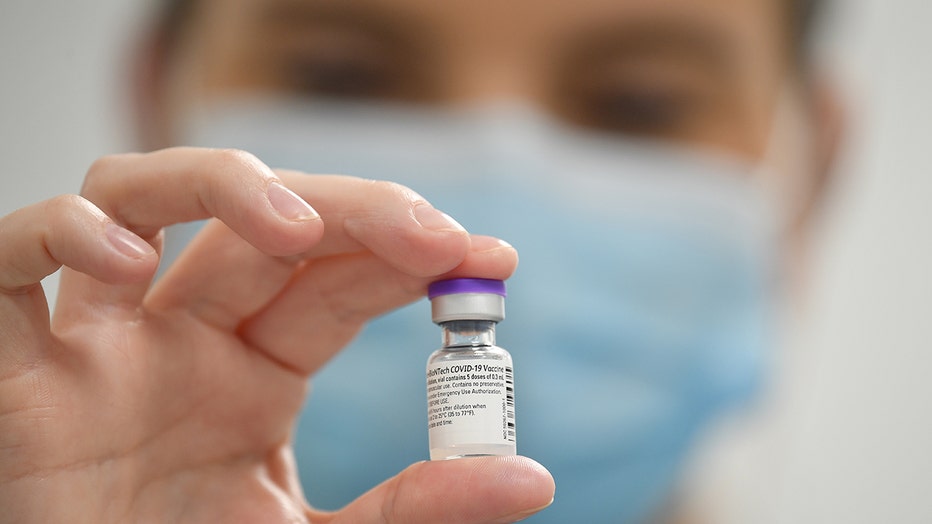 A member of staff poses with a phial of Pfizer-BioNTech Covid-19 vaccine at a vaccination health centre on the first day of the largest immunisation programme in the UK's history on December 8, 2020 in Cardiff, United Kingdom.

"Our finding of reduced effectiveness after the first dose would support efforts to maximize vaccine uptake with two doses among vulnerable groups in the context of circulation of the delta variant," the authors continued.

The study also examined the AstraZeneca vaccine, which is in use in the United Kingdom.

That vaccine was 67% effective against the delta variant, compared to 74.55% against the alpha variant.

The findings reinforce an earlier study from Public Health England in May finding the Pfizer vaccine 88% effective against symptomatic disease from the delta variant two weeks after the second dose.

The studies stand in contrast to data released by Israel’s Health Ministry earlier this month that said the Pfizer vaccine appeared to be just 64% effective against preventing symptoms of the fast-spreading delta variant.

CDC director says US reaching another pivotal moment in pandemic

CDC Director Dr. Rochelle Walensky on July 22, 2021, said the U.S. is reaching another pivotal moment in the COVID-19 pandemic, noting an increase in cases and some hospitals reaching capacity in areas of low vaccination rates.

The data, however, still showed the vaccine is highly effective against preventing serious symptoms and hospitalization. During May, that figure stood at 98.2%, and during June, it was 93%.

This news comes as delta variant cases soar in many countries, including notable case increases in India and the United Kingdom.

The delta variant — which is more than 200% more transmissible than the original coronavirus — is also pushing cases up in the United States.

During a White House press briefing last week, CDC Director Dr. Rochelle Walensky said cases in the U.S. were up about 70% over the last week, hospital admissions were up 36% and deaths rose by 26%.

"There’s a clear message that is coming through: this is becoming a pandemic of the unvaccinated," Walensky said. "We are seeing outbreaks of cases in parts of the country that have low vaccination coverage because unvaccinated people are at risk. And communities that are fully vaccinated are generally faring well."

An Associated Press analysis of available government data from May showed that "breakthrough" infections in fully vaccinated people accounted for fewer than 1,200 of more than 853,000 COVID-19 hospitalizations. That’s about 0.1%.

While the CDC initially tracked all breakthrough infections, the agency shifted to only tracking those linked to hospitalization or death in May, leading to some confusion over how many breakthrough cases are actually contributing the rise in COVID-19 infections.

Dr. Jay Butler, head of the COVID-19 response at the CDC, said during a briefing with the Infectious Diseases Society of America last week that the vast majority of these breakthrough cases "tend to be milder."

As of July 21, 2021, more than 162 million people in the United States had been fully vaccinated against COVID-19.